WE’VE had a hugely positive response to this year’s West Cork Farming Awards, which once again will put a well-deserved spotlight on the stars of our local agri-sector.

This is the seventh consecutive year we’ve run the awards in conjunction with the Celtic Ross Hotel and the level of interest and standard of entry is as impressive as ever, showing the professionalism, passion and dedication of farmers right across our region.

There are seven categories which make up this year’s awards and over the following weeks we will be profiling the shortlisted candidates (in three of the categories there is a single outright winner) in The Southern Star and on www.southernstar.ie and will be outlining what it is about them that caught our esteemed judge’s attention.

Thee three farmers in the running to take the Dairy Farmer of the Year are first up to be profiled this week.

The other award categories are:

Winners will be announced at a ceremony in November.

DAIRY FARMER OF THE YEAR FINALISTS | Sponsored by AIB 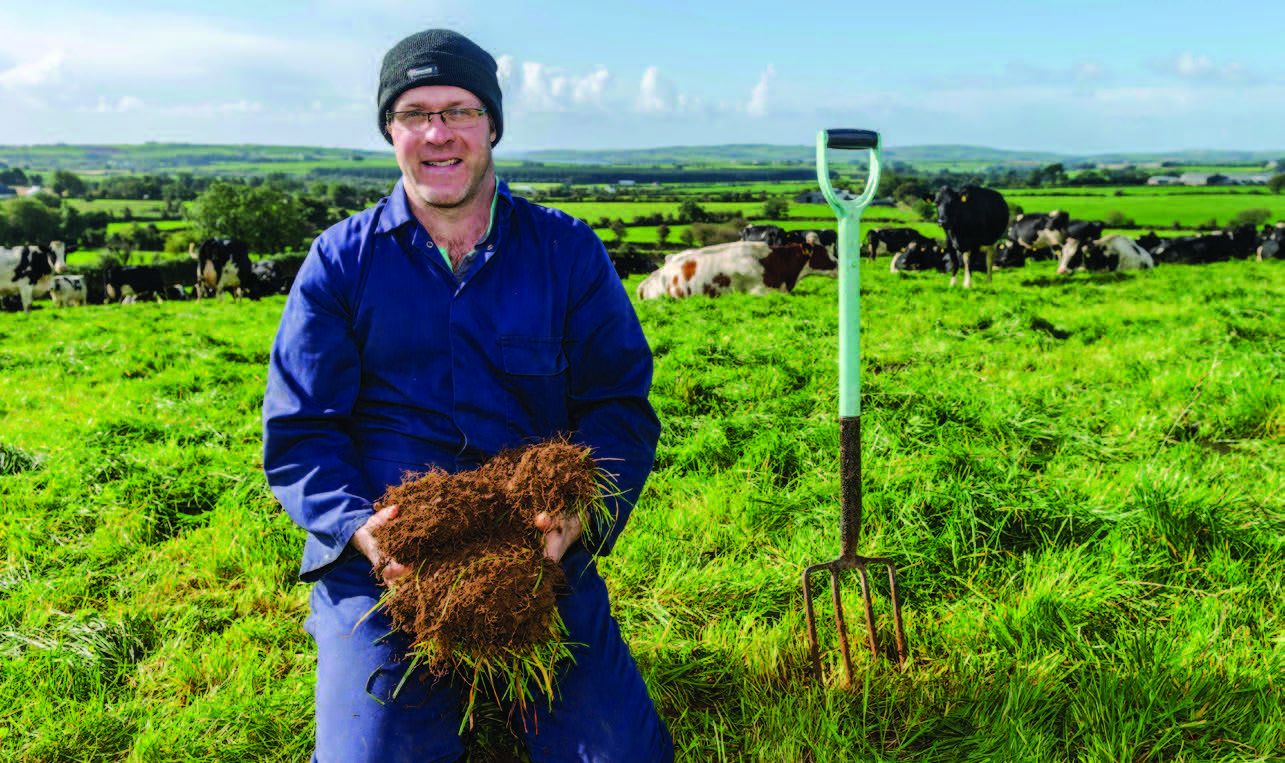 TIMOLEAGUE farmer Tom Griffin is almost as much a scientist as he is a farmer, admitting he’s prone to going on the odd ‘solo run’ in terms of his work practices.

He took over the family farm in 2011 after working as an AI technician for five years, and is clearly passionate about what he does, and very grateful he gets to do it in West Cork.

Having travelled extensively to see farm set-ups in New Zealand, Switzerland, France, Germany and Northern Ireland, he’s convinced the conditions in the area are perfect for pastoral dairying.

With a herd of 200, and a block of 78 hectares, half owned, half leased he said: ‘There’s no where else I’d like to farm, and I’m also very aware that we have a great co-op structure, which gives us a great starting point.’

With this awareness, his philosophy is to put the best cow possible on this ‘natural advantage,’ and to do his very best with the soil.

Herd genetics are covered by being 100% AI for the past 20 years, with an EBI average of 198. When it comes to the soil, Tom is constantly educating himself and blazing a trail in his practices.

‘Back in 2016, in the middle of breeding season, my cows showed they had a phosphorous deficiency. They were supplemented and were perfect within three days again but I wanted to find out why?’

He declined conventional advice which was to apply chemical phosphorus, and instead unlocked the mineral through biological means and aeration.

‘This really showed to me the power of biology and how farming is about a lifetime of learning.

‘We’ll never know it all and it’s so important to realise that,’ he said.

Tom also grows clover on his land and is in the very early stages assessing multi-species swards.

‘We’re also reseeding to get more high sugar grass that responds better to lower nitrogen; we soil test annually; analyse our slurry so we can accurately balance it to the grass needs and don’t over fertilise; and also inoculate the slurry to aerate it.’

He has recently installed a robotic milking parlour which, when operational in December, will give autonomy to each cow, improve animal welfare and also the father of four’s work/life balance and he’s quick to point out the backing of his family, including wife Laura.

He recorded 550kg milk solids last year with an average yield per cow of 6,500L. But Tom admits he doesn’t ‘live or die’ by numbers and results of his herd.

‘My bank manager mightn’t like to hear that,’ he joked. ‘But the spirit we’re trying to farm in is a really positive one. If there’s a negative it’s taken as a learning and I think that once the attitude is right you can get over pretty much any adversity.

What’s satisfying to me is knowing that I’m always trying my best,’ he said. 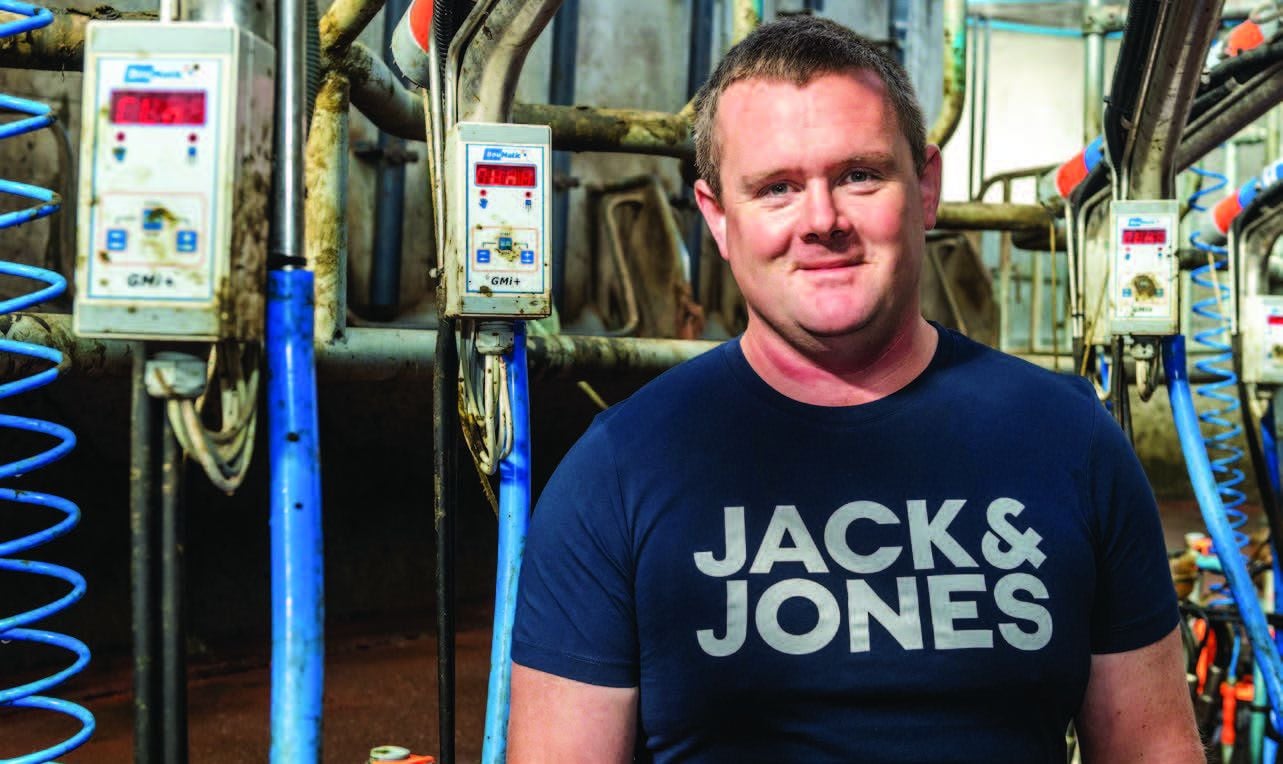 DRIMOLEAGUE farmer Aidan O’Donovan works in partnership with his father Sean and is the seventh generation to farm the land in the townland of Counkilla.

He’s well aware of both the privilege and the responsibility this brings with it. A Darrara Ag College graduate (he completed his studies there in 2004), he went on to complete an apprenticeship in block laying and worked in the construction sector until 2010.

Next he worked as a milker and farmhand on Glenilen Farm. In 2012 he got a new entrant milk quota, bought his own herd of 65 cows and replacements and rented a farm from Alan and Valerie Kingston, of Glenilen

He entered into a formal partnership with Sean in 2016; and just two years later, the collaboration saw them merge both herds in the home place. At the time the home herd was 95, and they now milk 180 animals.

Prior to the merger they invested in extra cubicles and slurry storage. And since then the father and son duo have made considerable infrastructural investments including a new 20-unit parlour, construction of 1.5km of roadways, improvements to existing roadways and fencing.

Other recent investments have included purchasing a dribble bar slurry spreader and a drafting system in the yard.

However, they are now at the stage where their focus has switched from farm expansion to farm efficiencies.

He’s a father of three, two girls and a boy, and being able to spend time with time with his wife and family is important.

The focus is now on incorporating clover in to established grassland, as they’re already including it in new reseeds.

The overall herd EBI is 142; young stock are currently at 192 and the six week calving rate on the farm has improved from mid 60s to 74% in 2020. Aidan has also been responsible for doing all their own AI since 2010.

The Drinagh supplier says he works really well with his father: ‘He’s a very big part of the operation here, and it’s a great advantage to be able to bounce things off each other and drive each other on.’

They also host grass discussion groups on the farm, which Aidan says is very motivating and a great way to stay connected with people, innovations an ideas.

‘The farm has an extensive amount of stone ditches built by my grandfather with hedgerows. My father expanded the farm when he took over and brought it to a really great place when I came on board.

‘My ambition is to hopefully be in a position to do the same thing,’ he said. 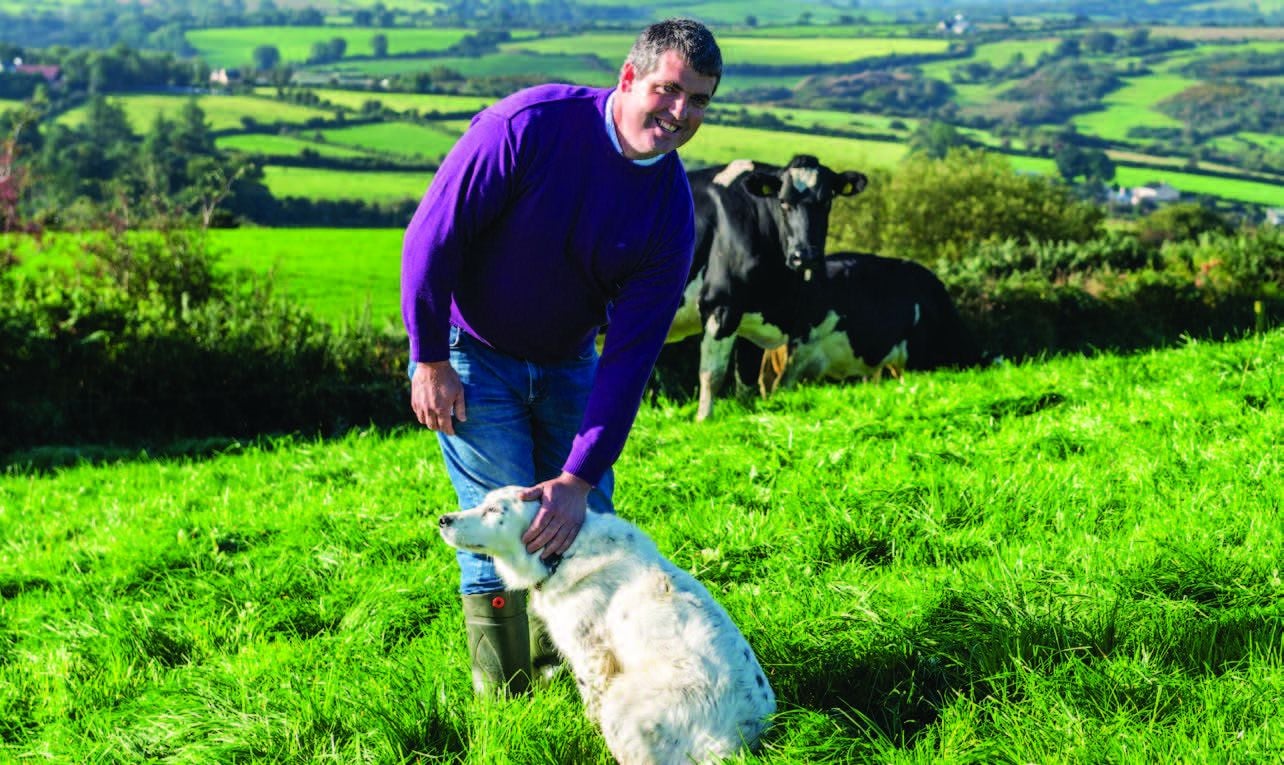 BALLINEEN farmer James Hurley, like all farmers, is well aware of the intense workload that comes with the job.

But he’s also acutely aware of the help that’s out there in terms of agri-tech innovations to lighten the load, particularly at busy times of the year and the forward thinking farmer is happy to embrace them.

This year the second generation farmer invested in SenseHub heat and health detection collars for his herd of 109.

The well established technology allows farmers to detect fertility as well as health issues early, ultimately saving on time and costs. And while it’s still early days for James, the results are already looking impressive.

‘The investment is definitely paying off. It meant we had 89% of the herd calved in six weeks, from January 25th, and calving to grass,’ he said.

As a father of five - four boys and one girl – aged 10 to four, the Hurley household is a busy one and it’s important for James and his wife Orla to have a good work/life balance.

‘We also invested in a new milking parlour last year which has significantly reduced our milking times which is another positive. It’s given me that freedom to bring the kids to things like training in the evenings,’ he said.

James took over the home place in 2002 from his late father John. Since then he’s focussed on improving herd genetics and employs 100% AI.

Currently EBI of his herd is a very respectable 191, well above the national average.

Yields were an average 6,400L per cow last year and milk solids were 523kg.

He’s currently at maximum stocking rate with a platform of 33 hectares in the home block, and 33 on an outside block.

However, his focus is more on building a lean, high performing enterprise, and less on expansion.

He is also conscious of ensuring his farm is environmentally, socially and financially sustainable.

‘It’s a responsibility I don’t take lightly,’ he said, and it ensures he’s confident about the future of farming.

He pays close attention to water sources on his farm, ensuring they’re all fenced off so animals don’t have access to them; he maintains hedgerows to promote biodiversity and is committed to regular soil sampling, while also growing clover as part of his reseeding programme.

Walking the land every five days is another practice he follows.

‘I’m very aware that I’m simply the guardian of this land for the future generation and I am doing my best to preserve what we have here,’ he pledged.

Next week: We profile the winner in the DIVERSIFICATION category