THREE Bantry siblings felt so fed up at the prices their Hereford and Angus cattle were making in factories that they took matters into their own hands.

They are currently selling a 7kg beef box for €100 which comprises a mix of prime and household cuts: one round roast, three 500g mince meat packs, 500g diced stewing beef, 12 burgers and five steaks (2x T-Bone, Rib-eye, Sirloin, Round).

They process one animal a month with a local butcher, and have plans in the future to increase production.

Their parents Gene and Joan are fully on board with the business and the siblings say it wouldn’t work if it wasn’t a family effort. 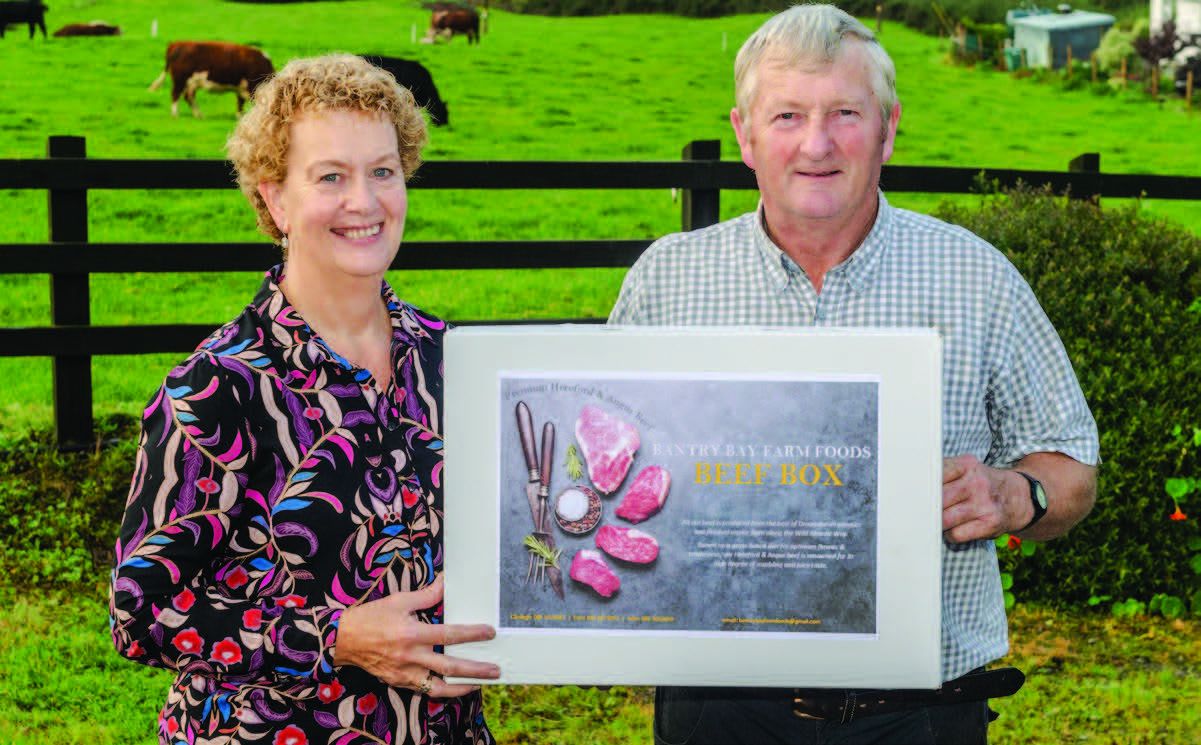 Gene, like his father and grandfather before him, has been farming full-time at Droumdaniel for the past 40 years, starting out with a mix of dairy and sucklers.

Driven by the quota limitations, he switched to a full-scale pedigree beef farm in 2004 and has developed a pedigree herd of 43 cows on

The siblings all pursued third-level qualifications while also helping on the farm.

John (27) has a BSc. Food Science in UCC and works with Carbon Group in Ringaskiddy;

Clodagh (21) is studying Food Marketing and Entrepreneurship in UCC while

Eoin (25), is a graduate of Instrument Engineering from CIT and has recently completed his Certificate in Agriculture at Clonakilty Agricultural College.

He works full-time with Rea Refrigeration and is also very involved on the day-today running of the farm.

‘We are a busy bunch but we were convinced the meat box was an idea worth pursuing,’ said Clodagh.

Eoin said: ‘It’s either football, Herefords or Angus that we talk about around the table! My father has been breeding pedigrees since 1984 and we’ve great pride in our genetics. We were convinced that there was more potential income to be generated from them. Given the quality of the surplus heifers we have, we felt they were undervalued at €1,000.

‘Meat boxes are a popular in the UK and I’ve become good friends with farmers there through Hereford breeding so I reached out to them first for advice. Then during lockdown, Clodagh needed a project as part of her course which gave us just the push we needed to get it off the ground.’

Clodagh said: ‘I was very lucky to be able to link my college degree with what we are doing with the beef boxes. It’s great to have the experience of developing a business idea from start to finish, and being able to put all of the theory I have learned into practice.’

Deciding on the price of the box was one of their first decisions that was made and they fixed it at €100, and that dictated the weight. When they were deciding what to put in the box, they looked at their own freezer and what it could comfortably hold, and they were fortunate enough to secure the expertise of a local butcher.

In between, there were hours of Zoom calls and lots of research, an investment in a refrigerated trailer, as well as ensuring they had a steady supply of cattle available every month.

They tested the water initially through word of mouth, but within a week of launching, they were already fully booked for their second month, and they haven’t looked back since.

John explains how they stand over every cut: ‘Hereford and Angus beef is genetically superior to the other breeds on the market. Natural flecks of white marbling are visible throughout the various cuts which provide enhanced flavour, juiciness, adding a succulence to the meat.

‘Our beef is also dry aged for 21 days by our local craft butcher. This allows the natural enzymatic and biochemical processes to take place that result in the improved tenderness and flavour of the meat.’

Their customers come from all over Cork, but they also have insulated boxes for clients outside of Cork, and have sold boxes throughout the country.

The siblings plan to stick to their target of one animal per month for the first 12 months, and will aim towards increasing output after that and hopefully distribute to local restaurants.

They also intend on investing in cool storage at home for next summer to keep a supply of gluten-free and flavoured burgers and steaks for BBQs.

Further down the line, the ambition is to open a farm shop, but a more immediate task is get their website up and running.

Their advice to any other farmer thinking of diversifying?

‘Don’t rush into anything,’ says Eoin. ‘Also be prepared to put in hours of work behind the scenes, and don’t be afraid to ask questions. The farming community are always willing to help each other out and if you don’t know something, chances are someone else does.’

‘It’s great!’ says Eoin. ‘We all have different strengths that we can apply to the various aspects of the business. We have a broad skillset between the five of us, and I don’t think this is the kind of thing you could do on your own.

‘We are very grateful for the support from our family, friends, colleagues, neighbours and all the people we have met on our journey so far. We hope that our business will continue to prosper into the future.’