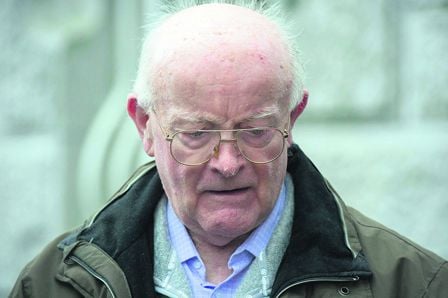 A 76-YEAR-OLD retired West Cork priest who sexually abused a seven-year-old girl while hearing her first confession at a school in the area, has been jailed for two years.

John Calnan, who is no longer in ministry, was sentenced to three years in jail with the final year suspended, after pleading guilty to sexual assaulting the girl in West Cork between 1988 and 1989.

Sgt Maurice Downey told Cork Circuit Criminal Court that the girl was preparing for her First Holy Communion at school and Calnan was invited to hear First Confessions.

The confessions were being held in a kitchenette area and as Calnan began hearing the girl's First Confession, he put his hands inside her underwear and digitally penetrated her.

The complainant, now a 34-year-old woman, said Calnan also appeared to be doing something to himself at the time.

When the little girl finished her Confession, Calnan re-arranged her clothing and gave her absolution and penance and told her that she could leave, said Sgt Downey.

When gardai arrested and questioned Calnan, he said he could not recall it and, when pressed, he denied it happened. But he now accepted it had occurred and had pleaded guilty.

A native of Rossmore near Clonakilty, Calnan, who was ordained in 1964 and had served mainly in parishes in West Cork, has a number of previous similar convictions.

He received eight years in jail for those offences and in February 2015, he pleaded guilty at Cork Circuit Criminal Court to one count of indecent assault on a young girl.

The assault on the ten-year-old girl happened when he stopped to ask her directions and picked her up in her car and he received a one-year jail term for that offence, said Sgt Downey.

The jail sentences for Calnan, with an address at the Presbytery, Paul Street, Cork, are due to expire in July 2017 and the earliest possible release date for him is March 24th 2016, the court heard.

He was stood down from ministry in 1992 when the first complaint about him was made, and he later spent a year receiving treatment at the Gracewell Clinic in Birmingham, said Sgt Downey.

In a Victim Impact Statement read on her behalf by barrister Siobhan Lankford BL, the complainant spoke of how Calnan's abuse had impacted, not just on herself, but also on her family.

‘On the day of the assault and the days following, our home place was full of upset and confusion and anger at how something of this disgusting nature could take place. When brought to the attention of the school, my family were met with denial and a feeling of guilt and shame was inflicted on them,’ she said.

‘There were thinly veiled warnings about speaking out and how they would be thought of within the local community,’ said the woman in a detailed Victim Impact Statement.

Calnan was a pillar of the community and the church was the dominant force at the time and not to be challenged on any matter due to the influence it exerted across all aspects of life, she said.

‘There were no support groups or counsellors to interact with, just denial, rejection and a burden of shame and guilt that I have carried with me since that dreadful day,’ she said.

The woman told how her parents felt a huge guilt and remorse for something that they had no control over and they, too, were ‘two more victims of that awful day’.

‘They themselves had been taught by their own parents to trust and rely on the local priests for guidance and reassurance – in our case the trust and belief was with and in John Calnan.’

‘My father set to work that day with the knowledge his family would go about an ordinary school day, normal and happy – my mother would go about setting us off for school like any other day.’

But the day was far from normal and ‘the trauma of that horrendous ordeal’ has continued to influence both her and her parents up to the present day, over 25 years later, she said.

‘I have lost faith in the institution of the Catholic Church and all those that represent that institution – John Calnan has taken this belief that I had in the Catholic Church. He has robbed me and my family of the solace and the peace which we previously had from a belief so strong, a belief which was carried through the generations in my family.’

‘I did not get married in a Catholic Church, as I could not, and would not, allow any priest to counsel me and give me permission to marry the man that I love,’ she added.

‘The thought of being engaged in any sort of conversation about love, loyalty and especially the dictation with regards to sex, gave me such anxiety and anger, to do so would be inconceivable.’

what happened to her, even though it was neither their fault, not her fault, but the fault solely of Calnan.

The woman instanced how she would not let her daughter become an altar server or how she was fearful of leaving her alone, believing that if she does not leave her alone, she will not be harmed.

Defence counsel Tom Creed SC said that Calnan was deeply remorseful and he pleaded for leniency as he hoped to live long enough to see out whatever sentence was imposed.

He was in poor health having had a heart attack last year, he had Type 2 diabetes and was blind in one eye, while he also had severe problems with arthritis in his hips, said Mr Creed.

Judge David Riordan noted that Calnan had pleaded guilty to the offence and spared his victim the trauma of having to testify in a trial situation, which was a mitigating factor in his favour.

However, notwithstanding Calnan's plea and his poor health, he believed that the offence was at the upper end of the scale, as regards severity and merited a custodial sentence.

There were a number of aggravating factors, including the appalling breach of trust and the fact that he carried out the abuse while he was administering a sacrament to an innocent child, he said.

Judge Riordan sentenced Calnan to three years in jail but suspended the final year on condition he be of good behaviour and he ordered that his named be placed on the Sex Offenders register.