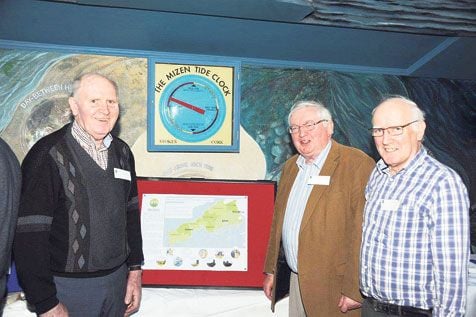 A PLAN to develop a single Mizen Peninsula brand, promote economic diversification and establish a formal network of historical assets for increased tourism was launched at the Mizen Head Visitor Centre.

The Integrated Strategic Local Development Plan 2015 was revealed by the newly-formed Mizen Community Partnership (MCP) at a launch event last Thursday, listing a number of achievable objectives for the short and long term. An official Mizen logo was also revealed at the launch and plans are under way for a cohesive online /offline presence of the Mizen Peninsula profile.

To encourage economic diversification, the MCP has begun networking local food suppliers with local shops and restaurants. It is hoped that local food producers may choose to diversify their product line to meet local demand, making the peninsula less reliant on outside suppliers.

To inspire tourists to stay a little longer on the peninsula historical sites including old mines, monuments and castles have been identified with the intention of creating a heritage brochure. There are future plans to mark walking and cycling trails.

Some medium- and long-term objectives include the development of a tourism attraction to complement the Mizen Head Visitor Centre, to develop eco-tourism and to build on existing adventure sports.

Plans will be made to improve broadband service and develop indigenous energy supplies.The partnership will establish links to neighbouring peninsulas and establish a regional initiative.

The Mizen partnership emerged from recommendations by the WCDP that the three key settlements of Ballydehob, Schull and Goleen join together to better channel funding and support into the area for the purpose of building a cohesive infrastructure. The MCP steering committee consists of two members from each of the three community councils.

The branding, food production and heritage sub-committees are made up of members of the community who have the special interests and skill-sets to meet their objectives.

The report was commissioned by the West Cork Development Partnership (WCDP) and Goleen and District Community Council in partnership with Schull and Ballydehob Community Councils. It was report was prepared by Future Analytic Consulting Ltd. The area and population of Mizen Peninsula were analysed to determine specific strengths and challenges that would culminate in the suggested list of 22 realistic development objectives.

At the launch, the CEO of WCDP, Ian Dempsey, commended the MCP for its initiative, saying that the report, provides a clear framework ‘in terms of setting out who you are, your analysis of the area, setting out the opportunities and making clear where you want to go as a community.’

To request a PDF of the development plan or to offer thoughts and comments regarding the new Mizen initiative, one may contact the MCP at 086-1947835 or email [email protected]