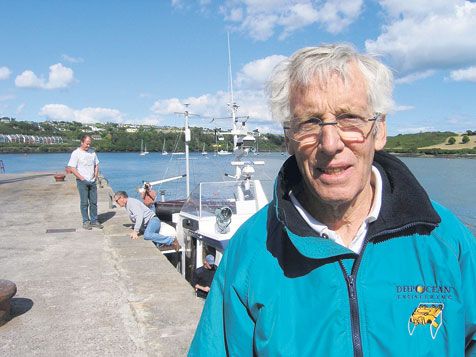 AS commemorations begin to mark the 100th anniversary of the sinking of the Lusitania off the Old Head of Kinsale, a diver associated with the wreck said they are ‘being stifled by rules and regulations’ that prevent them from exploring the wreck and retrieving significant artefacts.

Eoin McGarry from Dungarvan, is an experienced diver and a close friend of Greg Bemis, the American owner of the wreck.

‘When I began diving at the wreck, the biggest problem was the 300ft of water above it, now it’s the paperwork that’s the problem,’ said Eoin speaking to The Southern Star.

‘The main issue which we would like the public to know is that the state deemed the wreck to be an archaeological site which we are disputing, ‘he added.

‘The ironic thing is that, despite the fact that the wreck is protected, commercial fishing fleet operate in the area and their nets can get caught in the wreck and damage it.’

Greg Bemis secured ownership of the wreck in 1968, but had to assert his ownership in court after the State contested his ownership. A prolonged legal battle ensued for almost ten years before Greg won the case.

While Greg is allowed take items from the wreck, certain conditions have to be met and a licence has to be granted for this to happen. ‘We’ve been strangled for 20 years now and Greg at this stage is despondent at the prolonged situation’.

Eoin and Greg plan to mark the centenary celebrations by diving to the wreck on May 7th, where they will lay a plaque for those who died there.

A spokesperson for the Dept of Arts, Culture and The Gaeltacht said the conditions attached to Greg Bemis’ current dive licence, which runs to the end of this year, are largely the same as earlier licences he has obtained from the Department.

‘There is no evident reason, why the conditions as they stand should be regarded as overly-onerous or as an impediment to any future dive project on the wreck of the Lusitania assuming the intention was to adhere to the same general standards as projects undertaken in 2008 and 2011.’