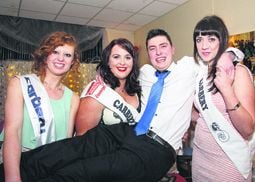 EIGHTEEN contestants from the Carbery region competed for the titles of ‘Ms Macra’, ‘Queen of the Land’, ‘Ms. Blue Jeans’ and ‘Mr. Personality’ last Saturday night.

Carbery Macra looks forward to hosting the Cork round of the Titles Night, in a few weeks’ time.