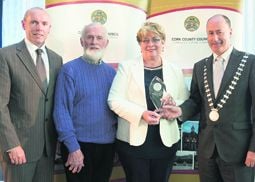 The Dunderrow Community Alert group were one of the divisional nominees. (Photo: Martin Walsh)

John O’Neill of the Caheragh Memorial Park Group said they were delighted to be amongst the final eleven, which also included three from North Cork, three from South Cork, one overall individual winner, and a community winner.

The award recognised the work that was carried out in the first of a three-phase development plan, namely the development of a community and recreation park in the village of Caheragh.

Ballinascarthy Community Association’s ‘Jeep for Jason’ was a fundraising initiative that seemed to inspire the entire county with people from all over the region – and further afield – willing donating to this worthy cause.

The Mayor’s Award was presented in recognition of the unique appeal of the project, which was evident at the launch – an event that attracted almost 2,500 people who came to view the jeep and meet Dr Jason Van der Veldt, who now, officially, has legend status.

The ‘Jeep for Jason’ project saw his battered 2008 emergency jeep being replaced with a 3.2LT 4X4 Ford Ranger that came fully kitted-out with life-saving equipment.

The Mayor’s Award for Dominic Casey of Church Cross, Skibbereen, was presented in recognition of the fact that the head coach of Skibbereen Rowing Club has been the main influence on the club for the past 30 years.

In his address the Mayor, Alan Coleman, said: ‘His drive and passion has created a great club with a great ethos. Dominic gives seven days a week to the club and deserves every plaudit going.’