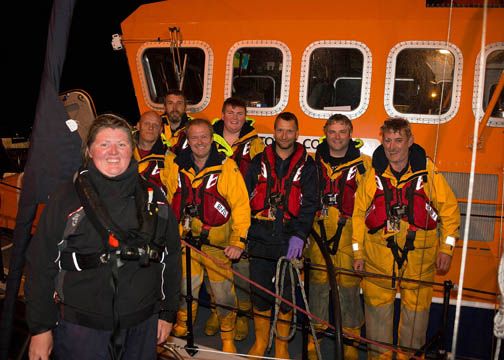 A LONE lady sailor was rescued off a yacht that ran into difficulty last night during a Falmouth to Baltimore race.

The Courtmacsherry RNLI All-Weather Lifeboat under coxswain Sean O'Farrell was called out at 7.10pm last night to answer a distress call from the racing yacht that was reported in difficulties off the West Cork coast.

Its lone lady sailor had reported a brief message that she was in trouble. The Courtmacsherry lifeboat, with a crew of seven men, were away immediately and proceeded to carry out a search of the area, along with the Baltimore RNLI Lifeboat and the Coastguard Helicopter Rescue 117.

The casuality was located in difficulties 10 miles south of the Old Head of Kinsale and the Courtmacsherry Lifeboat took the yacht in tow to the safe surrounds of Courtmacsherry Pier. 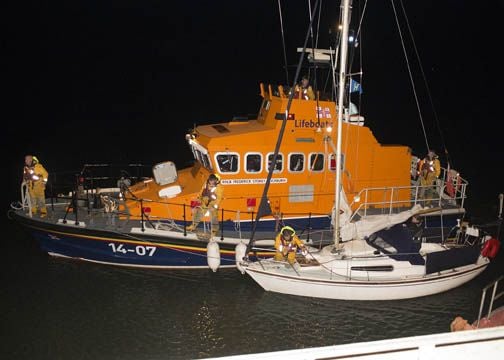 The rescued yacht being towed back to Courtmacsherry

The lady was taking part in a race from Falmouth in England to Baltimore when she propped and lost her steering and power. Conditions at sea were windy, force 5/6. The relieved skipper from Plymouth was glad to be on land after a tiring four-day journey in challenging conditions.

It was the second callout of the evening for the Courtmacsherry crew as it was called out earlier at 6pm to go to the aid of a 40ft pleasure fishing boat that encountered difficulties off the Seven Heads in Courtmacsherry Bay.

The lifeboat had just towed the fishing boat back to Courtmacsherry Pier when the second callout came from Valentia coast guard. The station's voluntary Lifeboat Operations Manager Brian O'Dywer was loud in his praise of the Lifeboat crew and said iit was a great example of Lifeboats and the coast guard helicopter acting quickly to locate the stricken yacht and carry out an important rescue.