A truck successfully negotiates the corner onto Market Street, but not all such manoeuvres are as successful. 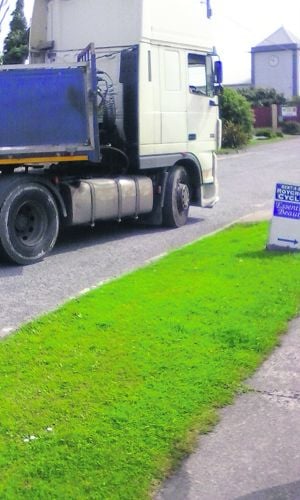 A truck successfully negotiates the corner onto Market Street, but not all such manoeuvres are as successful.

A DANGEROUS junction in Skibbereen needs to be urgently addressed, a local councillor has said.

Cllr Joe Carroll is worried about the state of the junction linking Field’s car park and Costcutters on Market Street in the town.

Many trucks, buses and other large vehicles are being forced to drive up on the curb, as they approach the roundabout from the hill. They are having trouble turning out of the junction because there is not enough space for them to complete the manoeuvre.

‘Traffic coming down the hill is hitting off the curb,’ said the Fianna Fail councillor. ‘It’s ridiculously tight.’

Cllr Carroll is proposing that the road going down the hill be extended over the Caol stream to create extra space and ease congestion at that location.

‘What I want, and what everyone wants, is for the road to be extended over there and for a straight junction to be made out of it,’ he said.

According to the councillor, there are plans for a road that starts from the Cork Road and joins up with the hill on Market Street, to accommodate the town’s new secondary school, which is opening in September 2016.

This will increase the amount of traffic passing through the area, especially buses and other large vehicles.

‘This will be the main junction going out towards the roundabout and Baltimore Road,’ he explained. Cllr Carroll foresees future problems for this road if the current issues are not dealt with soon. ‘They will have to deal with this at some point in the future because this is going to be the main road passing through the town,’ he told The Southern Star.