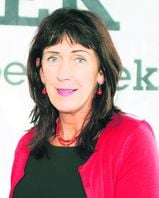 Cllr Mary Hegarty says she is ‘disillusioned’ with delays

THE delays in road surface repairs in Bantry have been blamed on Irish Water.

At a Western Committee meeting this week, councillors heard their colleague Cllr Patrick Murphy maintain that parts of the town which badly needed re-surfacing could not be tackled until Irish Water fixed drainage leaks.

‘Most of the streets in the town are pretty bad, but nothing can be done until breakages are fixed in blackspot areas like Caherdaniel, Old Barrack Road and Ballylickey. People in Bantry have water interruptions on a regular basis and in fairness Cork County Council prioritised these before Irish Water took over responsibility,’ said Cllr Murphy speaking to The Southern Star.

‘Cork County Council was far more responsive to serious problems with breakages and the problem now is that Irish Water are re-evaluating projects that had already been prioritised by Cork County Council. With the summer season upon us, there will be even more demand for water in the Bantry area.’

Cllr Murphy said he was of the belief that the work was imminent and yet two years down the line, no progress has been made. ‘It seems that Irish Water is reviewing what Cork County Council did and doing a business case analysis of each project. My fear is that because Irish Water are a semi-state company they will be more inclined to invest in large urban areas with high population density instead of rural towns with low population density.’

Cllr Mary Hegarty said that she is disillusioned with the delay in the Bantry scheme.

‘We can’t get the road done until the water mains are laid and I’m getting complaints from people and I’m annoyed that I have to tell them it’s still not progressing,’ said Cllr Hegarty.

Cllr Michael Collins echoed Cllr Hegarty’s call and said he, too, was regularly getting complaints.

‘The situation is so bad and there are continuous leaks and breakdowns and it’s a crisis that needs to be resolved,’ said Cllr Collins.

Cllr Paul Hayes said there seems to be some slippage in deadlines for some of the projects.

‘Bantry seems to be a big problem with the road surface wrecked and they are waiting for Irish Water before work can begin.’

In response, David Keane, county engineer and director of water services with Cork County Council, said the council was very conscious of the situation in Bantry.

‘The shift of power has now gone to Irish Water and we can’t start tendering until we get money from Irish Water. The road schemes are then subsequently being delayed by Irish Water planned works.’