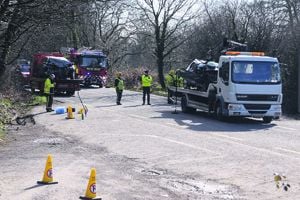 GARDAI in Bandon are appealing for witnesses to the fatal traffic collision last Friday evening, March 13th, that claimed the life of 30-year-old Kevin O’Brien from Gurteenasowna, Dunmanway.

The two-car collision occurred at Coolfada on the Dunmanway Road just outside Bandon shortly before 6pm when Mr O’Brien’s car was in collision with another vehicle.

It is understood that he had been driving east towards Bandon, and the other car had been heading west. Mr O’Brien was taken to Cork University Hospital where he was later pronounced dead. The driver of the second car, a 37-year-old woman from the Clonakilty area, suffered non-life threatening injuries.

Kevin O’Neill was buried in Dunmanway on Monday afternoon and is survived by his parents Tim and Catherine and brothers Finbarr, Colum and Cillian and sister Louisa.