‘BLOW it up ref!’ I shouted around thirty minutes into Sunday’s All Ireland hurling final. ‘Nobody’s wearing a mask, they’re all roaring and shouting into each other’s faces and everyone’s recklessly passing around hang sangwiches wrapped in tinfoil. This is a superspreader event. Call it off!’ It was worth a shot, I suppose.

Listen, I wouldn’t begrudge the Limerick team their two-in-a-row. They blew Cork out of the water in a display of Total Hurling that was more like Star Trek’s The Borg than anything a bunch of amateur human sportspeople should be capable of.

You’d have to ask, where are they manufacturing these skilful giants? Are they growing them in pods in the old Dell factory?

Are they harvesting them like mussels out in the Shannon Estuary?

And the sight of four of the Limerick panel lining up on the sideline after the game with four headphone-donning, newborn babies in their arms – well, that was beyond terrifying. Mother of God, I thought to myself, they’re making even more hurlers.

But the red tide is rising, ladies and gentlemen. The Cork U20s and minors have shown that the glory days can’t be far away from returning ....

It’s the hope that kills you.

The game came at a worrying time in the Covid-19 pandemic which, much like the Limerick full-back line, just won’t seem to leave us alone.

Although reportedly well-managed, 40,000 people piled into Croker and then piled back onto trains, planes and automobiles to get back down south. Images circulated on social media showed fans milling around outside the stadium like Covid-19 was the common cold.

With this current wave growing ever more serious and schools opening next week, the health service, and by extension the government, could be in for a very rocky winter. This is all part of ‘learning to live with the virus’, we’re being told. For some, particularly those in the live events and entertainment sector, it must still feel like March 2020.

These sectors have been supported to some extent up until now, but surely if 40,000 can crowd into Croke Park for a match, then it’s time to give the actors, musicians, roadies and mental health podcasters the chance to go back to work too?

The government is set to move ahead on Friday with news of the overall reopening for autumn and winter, despite the rising case numbers, so there should be good news ahead for the entertainment sector.

Whether the government will have the full backing of NPHET in doing so, well, that’s another question. 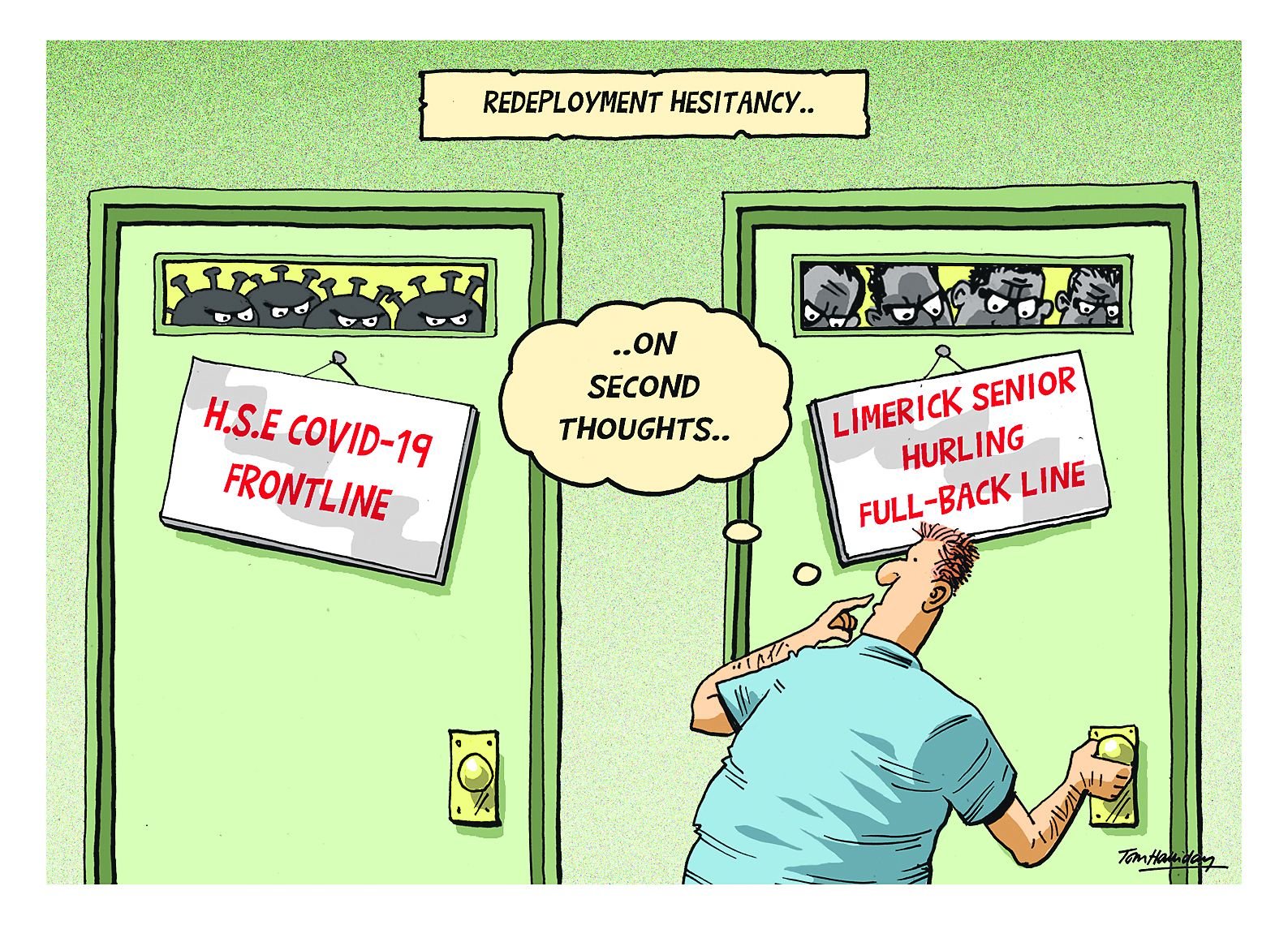 I NEARLY spat out my cornflakes on Sunday morning when I read in The Irish Times that there was new evidence claiming to cast doubt on the identity of Michael Collins’ assassin.

Researcher and musician Paddy Cullivan unearthed documentation in the British archives that shows Denis ‘Sonny’ O’Neill, a former British soldier-turned-IRA volunteer, was judged to have had a 40% disability to his right arm when he allegedly shot Collins. Cullivan believes O’ Neill wasn’t the shooter and that Collins may have been shot by someone in the Free State convoy, possibly Major General Emmet Dalton.

That’s the last thing we need now, I thought to myself, after a year of documentaries and speculation about West Cork murder cases.

ONE of the pillars of our recent success in the fight against Covid has been our high vaccine uptake and, hopefully, this will give us a wall of protection against a surge in severe disease this winter.

Some hospitals in the US haven’t been so well protected, however. You may have heard in recent weeks about the conservative US talk show host Phil Valentine who urged people to say ‘no’ to the vaccine and then, tragically, died from Covid himself. Or the vaccine-sceptical Irish-American Cardinal Raymond Burke who ended up on a ventilator after dismissing it as ‘the Wuhan virus’.

This week, there was an absolutely heartbreaking video on the New York Times website titled ‘Dying in the Name of Vaccine Freedom’, which showed a number of vaccine refusers in a hospital in the Ozarks region of the Unted States.

The patients were self-described libertarians who refused to be told what to do by a ‘biomedical security state’.

One of them died a few days after the interview, having expressed regret for the stance he took. Thankfully, this is only an issue amongst a small minority in Ireland, but some of this minority happen to work in the HSE and on the frontline. Paul Reid has said that the HSE will work to redeploy vaccine refusers away from public-facing roles, rather than force them to take the jab.

I think it’s an absolute disgrace that they would even consider turning up for work in a hospital or a nursing home setting while refusing to take a vaccine. They represent a serious threat to their patients and their hard-working colleagues. As the New York Times video states – ‘in a pandemic, one person’s freedom means another person’s death.’

I’d be redeploying them to the nearest dole office.