A MAN holds aloft a megaphone in front of government buildings. ‘This is war!’ he says. ‘They are coming to kill you and that’s the end of it. You have to fight the militia. Covid-19 is a fake. They are coming to steal your kids.’ Someone from the crowd shouts back ‘kill all the bastards’ and cheering erupts from the 2000-strong crowd.

Last weekend’s anti-lockdown march in Dublin was like a festival of Facebook conspiracy theories made flesh on the streets.

Ostensibly, the crowd gathered to protest about Covid certificates, vaccines and ongoing restrictions. Words like ‘apartheid’ were bandied about regarding what protesters believe is an emergent two-tiered society.

Calls were made for President Michael D Higgins to reject signing into law changes in the Health Act regarding restrictions to help us all combat the ‘thing’. The crowd even outrageously chanted ‘pedo’ at the mention of our President’s name.

The mob then marched up Botanic Avenue, singing ‘stick your vaccine up your a**e we are the 99%’. Now, I’m pretty sure that’s not the delivery mechanism the pharmaceutical companies intended. Likewise, 2,000 people certainly don’t amount to 99% of the population. In truth, most of the 99% were at the beach that day. And we know that another 62,000 of them were busy getting vaccinated by the HSE.

But the growing numbers at these marches should not be taken likely. While it’s easy to dismiss the ranting of a minority of cranks, it’s worth remembering that this is the very playbook used by Donald Trump to win an American election.

The outrageous claims ripped from internet conspiracy theories like QAnon. The baying for blood. The casual racism. And the unnerving thing is that more and more Irish people are reporting their friends and family members getting lost down the rabbit hole of online conspiracy theories.

With violent anti-lockdown protests taking place across the globe last weekend, from France to Australia, it’s worth remembering that Ireland is not immune to this fast-spreading epidemic of misinformation.

Des did State some service

This week marked the passing of one of Ireland’s true political giants. A somewhat reluctant leader, Dessie O’Malley established the Progressive Democrats at a time when Ireland was emerging onto the world stage as the poster child for a low-tax, pro-business economic strategy.

Like them or loathe them, the party was hugely influential at a pivotal time for the State. A man of conviction, O’Malley’s bust-ups with Charlie Haughey were legendary and led to deep mutual distrust between the pair.

Ever the pragmatist, however, O’Malley was willing to set his misgivings aside and enter coalition with Fianna Fáil (a party from which he had originally emerged) to bolster the dwindling fortunes of his own party.

He wasn’t willing, however, to extend this pragmatism to Sinn Fein or the IRA during the peace process.

At 31, when O’Malley was the youngest Minister for Justice since Kevin O’Higgins, he cracked down hard on subversives and developed a life-long hatred of violent republicanism. He and his young family required police protection at that time and he even slept with a gun under his pillow.

It’s fair to say that Sinn Féin’s current rise would not be to his liking. Whatever your views on his politics, O’Malley did his country some service.

His contributions to the establishment of the Beef Tribunal were most certainly, as he might put it, ‘in the national interest’. Indeed, many thought of him as the ‘best Taoiseach Ireland never had’. Ar dheis Dé go raibh a anam.

I was going to write a few words about the Munster Final this week but my editor tells me that I’ve reached my quota of expletives for this particular column.

Instead, I’m going to do a big West Cork shout-out for the industrious sheep of St Matthew’s graveyard in Crosshaven, who made national news this week after uncovering historic graves in the course of their job as landscapers.

Last summer, Fianna Fáil Cllr Audrey Buckley ‘hired’ the sheep after seeing the potential for ‘goatscaping’ while on a visit to Wales.

Now I’d love to know what the recruitment process was. Were the sheep formally interviewed, for instance?

Whatever was involved, Cllr Buckley got more than she bargained for.

As well as keeping the place tidy, it turned out that these little woolly wonders also had a penchant for archaeology when they uncovered the grave of a two-year-old girl who died on October  7th 1872.

It transpires that the grand-nephew of the little girl has been located by Cllr Buckley and plans to visit once restrictions allow.

I don’t suppose they could teach the sheep how to kick an ‘aul football, too? 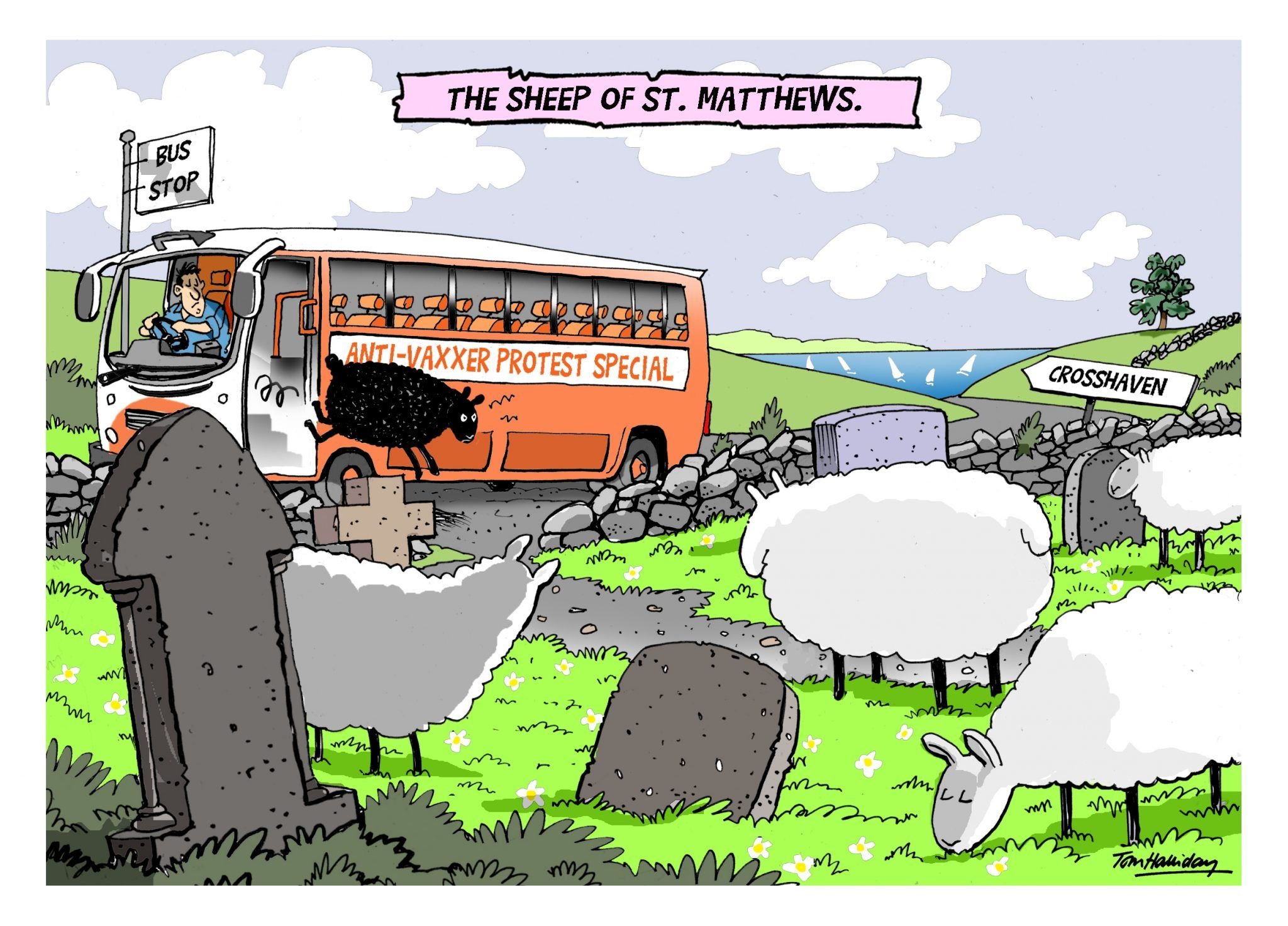