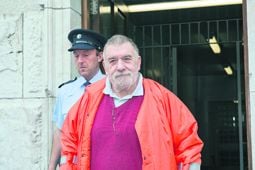 ONE man has been jailed for ten years and two others for eight years after they are caught off the West Cork coast trying to smuggle almost €300m of cocaine into the UK.

Skipper of the Makayabella yacht, Jonathan Powell (71) was given the ten-year term and crew members Benjamin Mellor (34) and Thomas Britteon (28) were each jailed for eight years.

All three were detained aboard the Makayabella, 217 nautical miles of the West Cork coast on September 23rd last, in a joint task force operation involving navy, customs and gardai.

Last week at Cork Circuit Criminal Court, Insp Fergal Foley told Judge Sean O Donnabháin that all three were in a poor state when detained. ‘To be blunt, they were delighted to see the navy.’

All three Britons had pleaded guilty to possessing 1,025kgs of cocaine with a street value of €290m for sale or supply and to attempting to import the drug into the United Kingdom.

Insp Foley told how the seizure of the drugs involved a multi-agency operation in Ireland working in tandem with law enforcement agencies in several other countries.

On Sept 14th 2014, a cruiser, the Sea Breeze, was inspected by Customs Officers at Rosslare after she ran out of petrol and was towed into the Wexford port by the RNLI Rosslare Lifeboat.

Customs officers became suspicious when they found six drums of diesel, a suitcase of food and a satellite navigation phone which had been used to make calls to a vessel 400 miles off Ireland.

An analysis of the vessel’s movements revealed that the US Navy had reported the Makayabella at the same location some days earlier, when she appeared to be floundering.

Further analysis revealed that Mellor had to be rescued in the Caribbean some weeks earlier when he was found floating in a dinghy under the influence of cocaine, Insp Foley told the court.

A French maritime patrol aircraft confirmed a yacht was 400 miles off Ireland and a joint task force operation was launched.

An armed boarding party under Lt Michael Brunicardi boarded the Makayabella under cover of darkness at 1.40am on September 23rd, 217 nautical miles off the West Cork coast, he said.

The armed boarding party met with no resistance from the three crew who were in a poor state having run out of food six days earlier, Insp Foley told the court.

Mellor, who had broken his wrist weeks earlier, was so desperate to stave off the pangs of hunger that he had resorted to eating cocaine from one of the 41 bales of the drug on board.

All three were detained by the Navy and later arrested by gardai when the Makayabella was brought into the naval base at Haulbowline and they were all later charged with drug offences.

Insp Foley said that Powell had been recruited by his son, Stephen (47), to go to the Caribbean in March 2103 to purchase the yacht and he was later joined by Mellor in the Caribbean, also in 2013.

They had bought the yacht on the pretext of chartering her for leisure purposes and they had spent a year sailing around the Caribbean to allay any suspicions as to their real intentions, he said.

Britteon had only joined them in July 2014 after flying to the Caribbean and they picked up the drugs off the Venezuela coast on August 4th 2014 and set sail for the UK.

Powell was to receive a six figure sum for his involvement while Mellor was to get £100,000stg and Britteon was to get £20,000stg for his part in the operation.

The drugs had a purity level of 70pc, giving a conservative street value of €290m, and the sums the three men were to be paid were small, given the risk involved, he said.

He said that Mellor and Britteon were at the lowest level of the operation, while Powell was at a higher level, but Powell’s son Stephen was at a much higher level in the smuggling plot.

Stephen Powell was the brains behind the operation, having bought the yacht for £100,000stg and he is currently serving 16 years in the UK for his part in the operation.

Powell was a self-taught sailor but neither Mellor from Manningham, Mornington Villas, Bradford and Britteon of Convamore Road, Grimsby, Lincolnshire, had any maritime experience, he said.

Defence counsel Ciaran O’Loughlin SC, Alice Fawsett SC and Michael O’Higgins SC all argued that it would have been a complex case for the State to try because of jurisdictional issues.

They said their clients had saved the State the expense and time of a complex trial with their early guilty pleas and they pleaded for the court to treat all three as leniently as possible.

Powell’s counsel, Ciarán O’Loughlin SC, said his client, who was the son of a policeman, had lost his wife some years previous and he also suffered from a number of health difficulties.

Mellor’s counsel, Alice Fawsett SC, said her client had been using drugs since the age of 12 and embarked on it to pay off a drugs debt, seeing this as the solution to all his problems.

Britteon’s counsel, Michael O’Higgins SC, said his client was working as a window-cleaner when he met Stephen Powell and that he agreed to sign up for what sounded to him like Caribbean holiday.

Judge O Donnabháin said it was a serious crime and the amount of drugs involved was huge, but all three accused deserved a benefit for saving the State a lengthy trial by their guilty pleas.

It was a curious situation in that the man, perhaps, most deserving of compassion because of his age and various illnesses, was Powell Snr, but he was involved at a higher level than his co-accused.

He sentenced Powell to ten years in jail and both Mellor and Britteon to eight years each and he backdated the sentences to September 23rd last, when the three were first taken into custody.