Brian O'Donovan from Bandon with his new born son Cormac at Christmas in Shenzhen, China

West Cork workers around the world share their experiences of coronavirus over the past year, with one person already fully vaccinated, and another yet to meet her colleagues after starting a new job from home

IT’S been almost a year since Bandon man Brian O’Donovan spoke about how the coronavirus was affecting his life in China, where he has been living for almost seven years.

At the time, Covid-19 was increasing at an alarming rate, with over 500 recorded deaths due to the virus which had first emerged in Wuhan. It seemed at the time that it was a long way off from hitting us here in Ireland.

Brian works as a PGA professional golfer at the Mission Hills Academies in Shenzhen, close to the border with Hong Kong. He is married to RuLin and says it has been a ‘crazy year’ and even more so, with the arrival of their son Cormac last summer.

‘Things here in China have been really good and normal life has pretty much resumed, or a ‘new normal’, with people wearing masks and taking temperature checks but other than that, it’s been good,’ Brian told The Southern Star.

‘There have been a few new cases starting to pop up here over the last week, but so far the government is very much on top of it.

‘The QR codes that they use there to track movements are very effective and if there are cases, they can track people easily, lockdown the area and test everyone.’ Patrick White with his wife Charmaine and son Lachlan in Perth, Western Australia

Meanwhile, Newcestown native Patrick White, who lives in Perth in Western Australia with his wife Charmaine and son Lachlan, said that government in his state has been very efficient in tackling any rise in Covid cases.

‘They have been strict with closing the borders and there have been no community transmissions here for several months so life here is relatively normal and we go about as if there isn’t a pandemic,’ said Patrick.

Working between Perth and Melbourne on a major tunnel project, Patrick found himself cut off from his family for nine weeks towards the end of last year when cases rose again in Victoria, and Western Australia shut its borders immediately.

‘I finally got approval to go home in September, but I had to quarantine for two weeks at a hotel in Perth before I got to see them again, and that was tough.’ 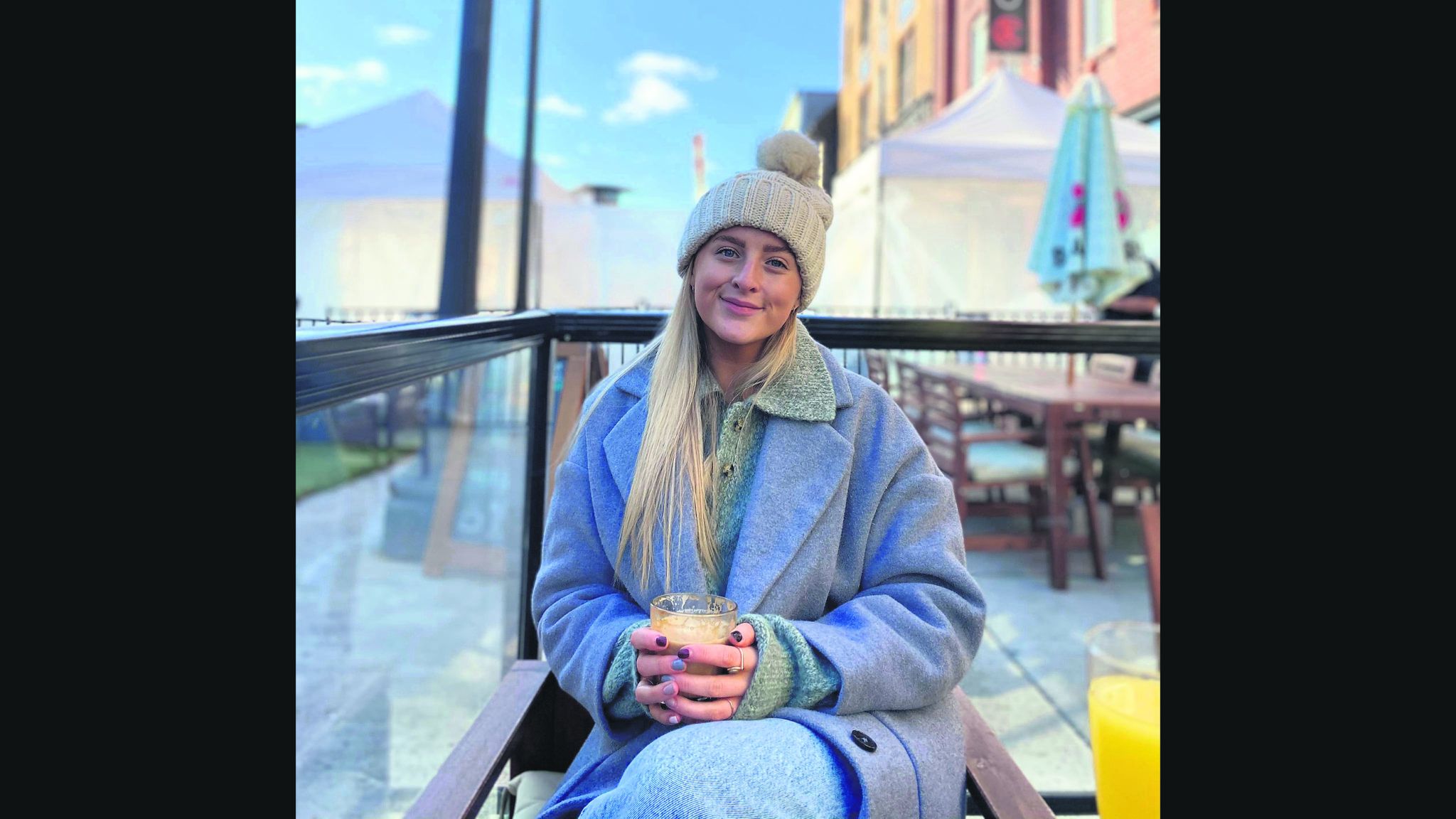 When Ellen Courtney, also from Newcestown, set off for her travels to Canada on February 14th last, a pandemic was the last thing on her mind as she settled into life in Toronto.

She has settled very well in her new surroundings and found herself working from home so has yet to meet her new work colleagues.

‘Toronto is still shut down at the moment and the Covid cases are still rising, so there are talks of a curfew being introduced,’ said Ellen.

‘I’ll be here a year next month and Covid has been eating a great chunk out of my two-year work visa and this year isn’t looking like we’ll be back to normal any time soon – but that’s life!’ 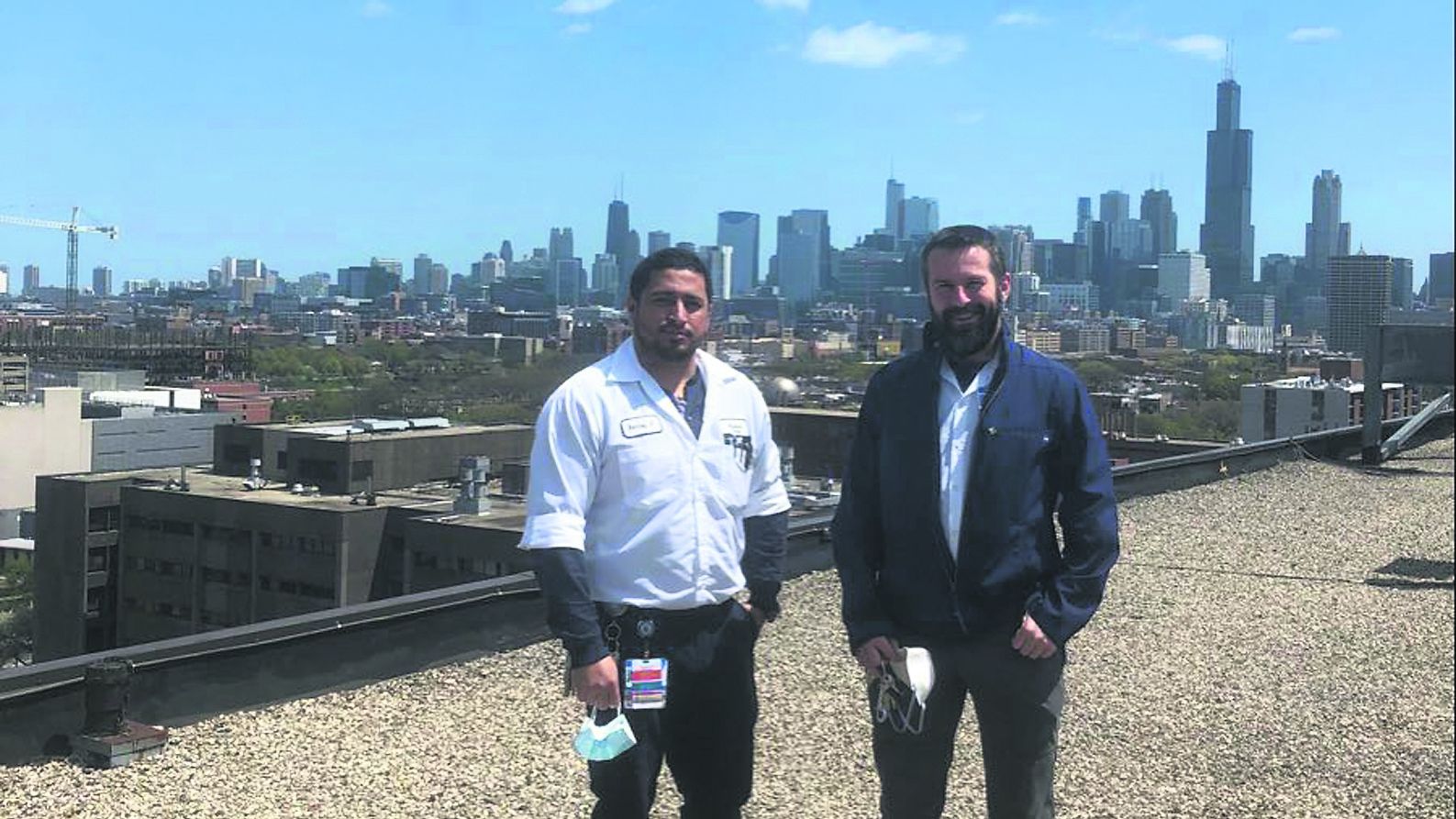 Eoin O’Donovan and a colleague, with his Covid vaccination card at CUI hospital, Chicago.

Her next door neighbour in Newcestown, Eoin O’Donovan, who has been living in Chicago for 20 years, has already received his two Pfizer-BioNTech Covid-19 vaccine shots.

He works as an assistant chief engineer at the UIC hospital there.

‘It’s been a tough 10 months with several of my co-workers catching the virus but there is light at the end of the tunnel. The Centre of Disease Control gave me a vaccination record card to carry with me,’ said Eoin.

The State of Illinois has recorded over 18,000 deaths and schools are closed but bars and restaurants are open until 11pm with mask restrictions.

The GAA-loving dad-of-three was even delighted to watch the Cork games and more importantly the Newcestown games online towards the end of last year.

‘For now we will stay positive and look forward to a time when things get back to normal and we are back on the field!’ 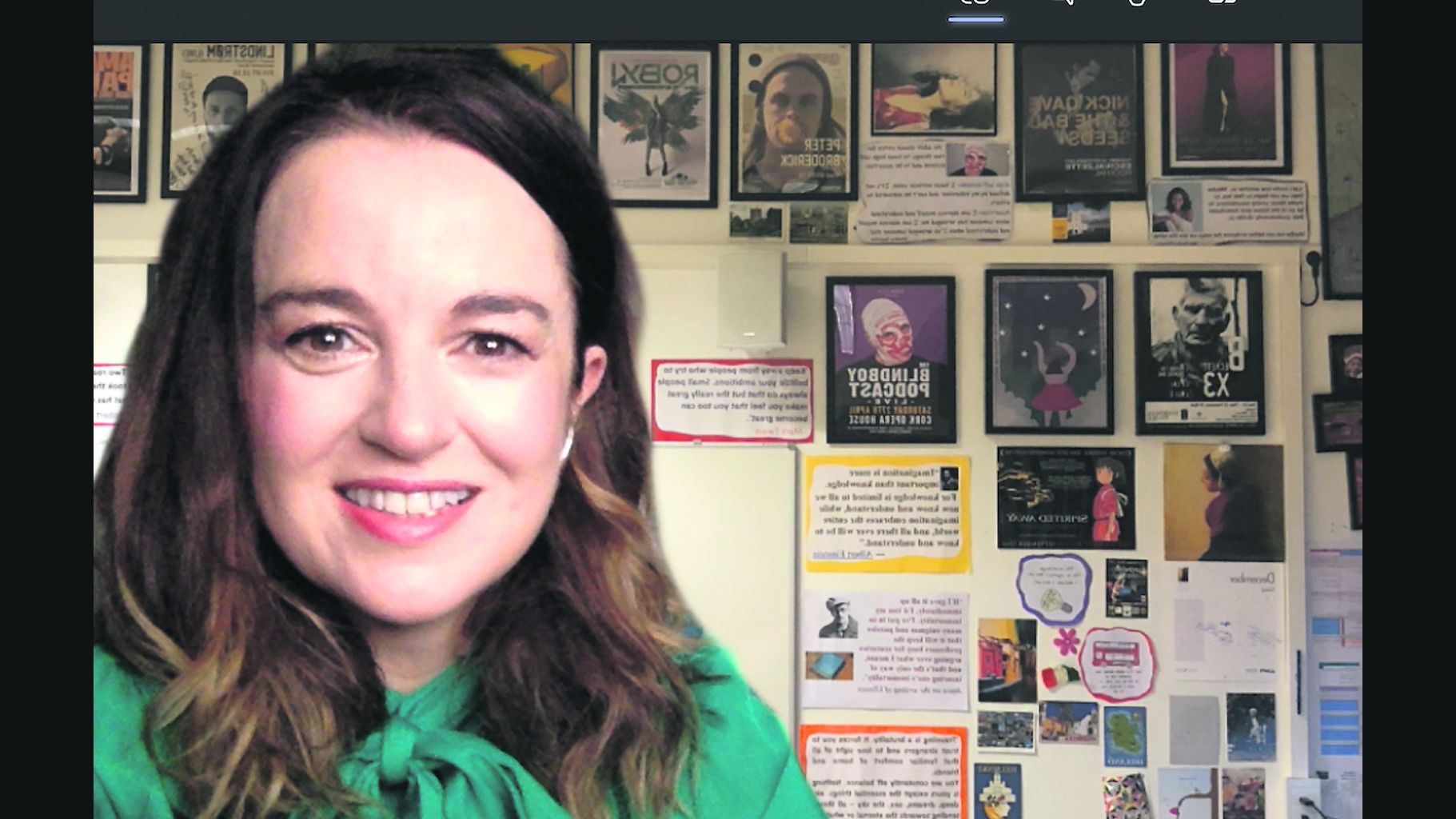 Sinéad O'Donovan on Teams teaching online from her classroom in Luxembourg

His sister Sinéad, a secondary teacher of Irish and English in the European Schools of Luxembourg – who has been tested eight times herself – said that things are relatively stable since the most recent restrictions were imposed last month, with the country averaging about 100 to 200 positive cases per day.

‘To its credit, the government here decided early on that the only way to combat this disease is to test, test and test again. Every resident received a code for a free test in late summer and again in December,’ said Sinéad.

‘So far, I’ve been tested eight times and it doesn’t bother me in the slightest and I find the regular testing reassuring.

The government also have plans to deploy mobile test units to schools in an effort to stamp out the virus there altogether.’

She added that all the students wear masks all day every day, even in primary school.

‘We are all used to it now and have accepted that, together with good classroom ventilation, it is the only way to ensure safety.’ 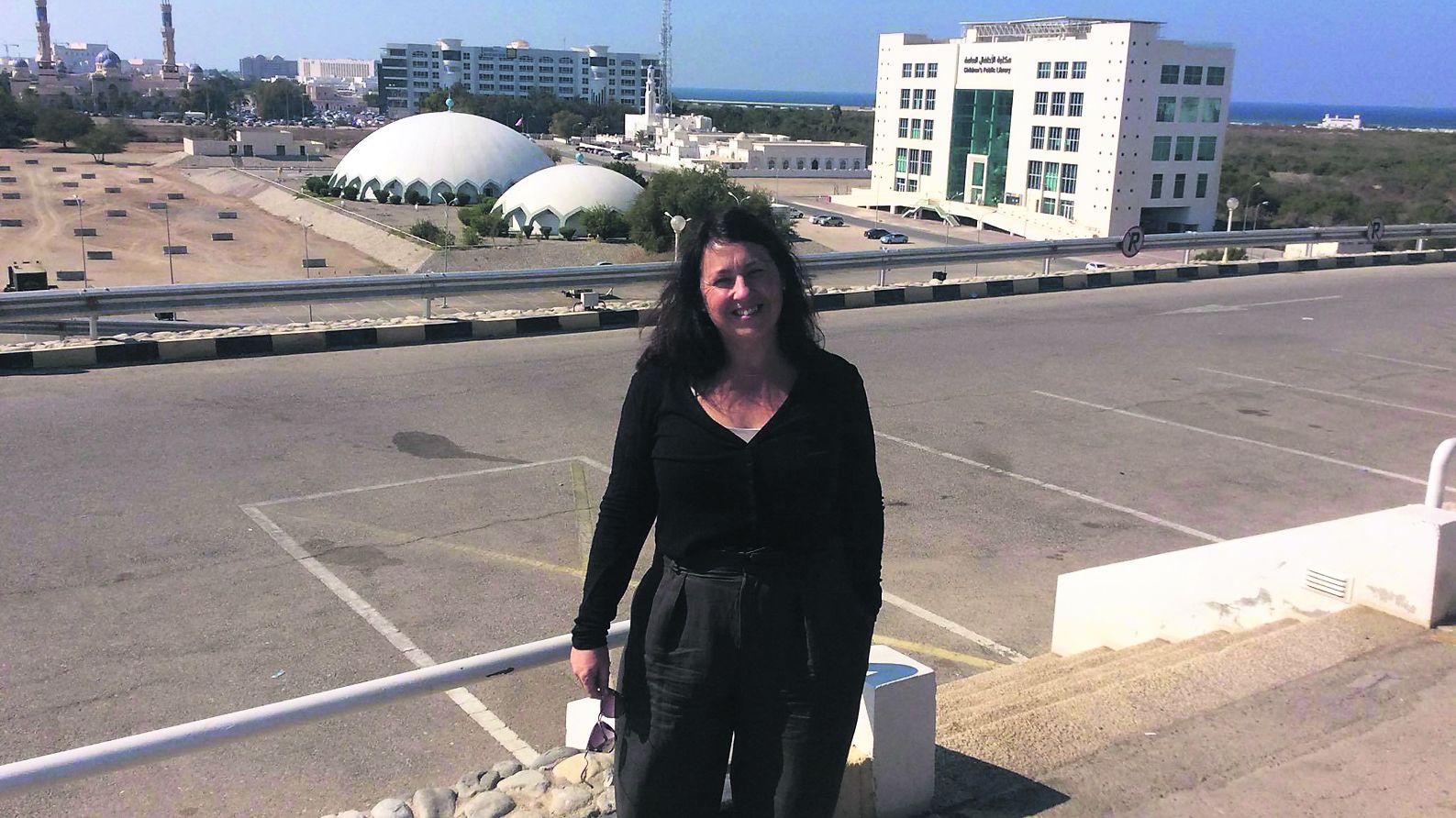 Louise O'Driscoll outside the front of the Children’s Science Museum in Muscat, Oman

Finding herself in Oman in the Middle East at the beginning of lockdown brought up its own difficulties for Louise O’Driscoll from Bandon, who moved there to teach English.

‘I arrived here on March 15th last and they locked down the country on the 17th and closed their border to all non-Omani residents. So I just got in before it,’ said Louise.

‘Once I completed my quarantine I started working from home when classes migrated online.’

Louise said that Covid entered the capital Muscat via the cruise ships and then spread like wildfire, leading to a national lockdown and curfews imposed during Ramadan, which were enforced by the military.

‘It’s not as bad now as before, and everything is back open, including the beaches which were closed for a period.

‘There have been 1,509 Covid-related deaths here according to the Ministry.’