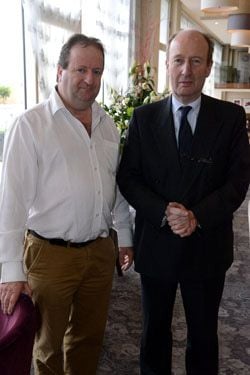 INDEPENDENT councillor Michael Collins has confirmed that he will be discussing, with his campaign team, an invitation by Shane Ross TD to join a new independent alliance.

The councillor – who previously served as PRO for the high profile and voluntary campaign group West Cork Community Alliance – said he would also be holding a number of public meetings over the next few weeks to gauge his constituents’ views of the proposed alliance.

Mr Collins confirmed that he had an hour-long meeting with Shane Ross in Cork on Monday, January 12 at which he put his cards on the table saying that he had, first and foremost, ‘the interests of the people of West Cork at heart whether it is in the council chambers or Dáil Eireann.’

Meanwhile, Declan Hurley, the Dunmanway-based independent councillor, confirmed that he, too, had a Monday morning meeting with Shane Ross.

‘It was a meeting of minds and a frank exchange of views,’ said Mr Hurley, ‘but it is early days yet because I still haven’t got the principles on which the alliance will be formed.’

‘I was impressed by his admission that his initial view of politics has changed dramatically ... he has become frustrated by the process as it stands.

‘That is why he is trying to get more like-minded Independent councillors and TDs to help him in his latest move to bring about the changes that he believes are necessary. I have made no commitment, no decision,’ said Mr Hurley, ‘but I look forward to having a follow-up meeting.’