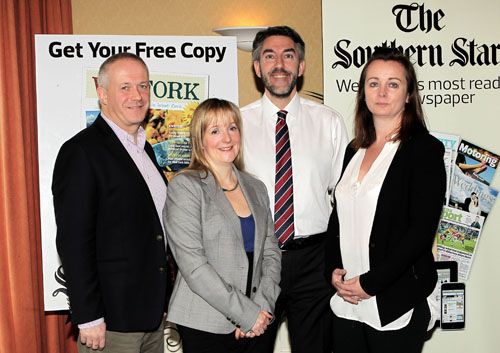 CLONAKILTY has the happy knack of putting its best foot forward and that certainly was the case at The Southern Star business breakfast, which was held at The Fernhill House Hotel on Friday morning.

Members of the town’s highly proactive Chamber of Commerce turned out in force to attend the meeting because they saw it as a good opportunity to work – in conjunction with their local newspaper – to highlight all that they have achieved over the last 12 months and to promote their organisation’s upcoming AGM, which will take place at 6.15pm on Wednesday, March 10th next at The Emmet Hotel.

Sinead O’Crowley, who is a director of the chamber’s retail sector, said: ‘We have achieved a lot this year, but we are especially proud of the fact that we launched our own voucher system. Just like real currency, the vouchers can be used in the majority of restaurants, bars and businesses in the town, and is a good way of supporting our year-round Shop Local campaign.’ 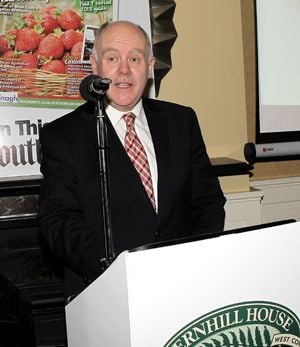 Clonakilty Chamber engages, not just with the local Municipal District but also with Clonakilty’s Mayoral Council and other high profile and hardworking organisations, such as the award-winning tidy towns committee, meaning it is involved in every aspect of the town’s development.

Clonakilty is looking forward to significant inward investment following the recent €2m purchase of the award-winning Waterfront site – a complex that includes 30,000 sq ft of commercial space, as well as 150 residential and mixed-use units – and major re-investment of this kind is certain to secure its long-term viability.

In terms of the general economic development of the town, Clonakilty Chamber is also looking forward to the construction of a new four-storey visitor centre by the owners of Clonakilty Blackpudding.

This major development will pave the way for the creation of a new processing plant, offices and staff facilities – a move that will see the production of the famous blackpudding return to the West Cork town from its current production facility at Little Island.

There was further good news for Clonakilty, last month, when it was confirmed that €2m will be invested in the town’s infrastructure.

The project involves the laying of new water mains, underground ducting, and the development of a new drainage system from Faxbridge to Mick Finn’s pub, as well as the complete resurfacing of the town’s main thoroughfare when the job is complete.

Members of Clonakilty Chamber plan to be ‘front and centre’ when it comes to engaging with visitors and locals alike during the construction phase of this project by getting the word out that ‘Clonakilty is open for business’ and by placing information billboards – complete with an artist’s impression of the finished project – on the two main approach roads to the town.

The chamber members are proud to report that they have engaged a professional PR company – as well as relying on their local newspaper – to let the people of West Cork know all about their five-year plan across the tourism, commercial and industrial sectors.

In the meantime, it is business as usual with the chamber actively promoting the town’s many festivals right throughout the year, including the first-ever Cork Open Backgammon Tournament, which will be held in Clonakilty this weekend.