BY SIOBHN CRONIN THE Carbery Group, which is headquartered in Ballineen, has officially opened Nutrifont in Brazil, a whey processing joint venture between the Irish company and BRF, one of South America's leading food companies. 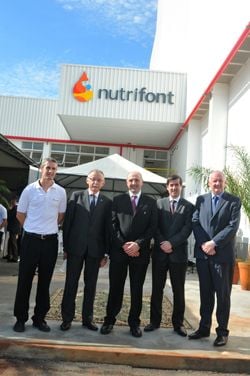 THE Carbery Group, which is headquartered in Ballineen, has officially opened Nutrifont in Brazil, a whey processing joint venture between the Irish company and BRF, one of South America’s leading food companies.

The new 70,500 square feet facility, which is located at Tres do Maio in the southern state of Rio Grande do Sul in Brazil, incorporates a state-of-the-art manufacturing plant. It will produce added value nutritional ingredients that will be supplied to the sports nutrition, infant formula and bakery sectors.

The joint venture will deploy Carbery’s innovative ingredients technology to process whey generated in two cheese-making facilities in the region.

The investment of USm represents yet another example of Carbery Group’s increasing internationalisation, and complements the company’s Synergy Flavours facility in Vinhedo, Sao Paulo in Brazil, giving the group a strong foothold in this rapidly expanding food market.

Carbery chairman Donal Tobin said the new joint venture with one of Brazil’s leading food companies would further enhances the firm’s footprint in the vast South American agri-food business. ‘Carbery’s ability to produce high quality whey protein ingredients locally will strengthen our offerings to the leading brands in Brazil, and ensure we are positioned for further growth in a dynamic and upward economic region.’

A diverse team of Carbery employees have relocated to Brazil to bring their expertise in the areas of process technology, operations, quality, finance and sales to the new venture.

Six employees have fully relocated to Brazil for the project and will be there for up to three years (some possibly longer). Other Carbery employees are expected to provide technical expertise on an ongoing basis.

With customers throughout Europe, the USA, Middle East, Africa and Asia, Carbery Group, through its growth platforms of dairy, taste and nutrition, is committed to continued expansion in global markets and becoming a major international supplier to the food and beverage industry.

It is owned by four West Cork co-ops, namely Bandon, Barryroe, Drinagh and Lisavaird, and it currently employs 550 people worldwide.

Under the leadership of chief executive Dan Mac Sweeney, and with the support of a strong management team, Carbery has transformed itself from a primarily local milk processing business in the late eighties, to an international food and ingredients business.

The Ballineen plant employs 220 and a spokesperson for the company said the Brazil deal may lead to more job opprtunities in the future.