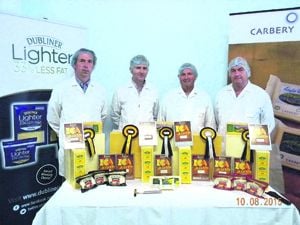 THERE was great success for local cheese producer Carbery last week, when it claimed five gold, four silver and three bronze medals at the 2015 International Cheese Awards in Manchester.

Its Dubliner, special reserve cheddar, half fat, and a flavoured butter all won gold with other cheese types manufactured in Ballineen winning silver and bronze awards in their relevant classes.

The International Cheese Awards is the largest cheese show in the world and a highly competitive global event, attracting 4,615 entries from 31 different countries in 2015.

Cheese makers and retailers throughout the industry make a special effort to attend the show and appreciate the recognition achieved through winning a medal.

These latest wins for Carbery add to an already impressive number of accolades and awards achieved at various international events in recent years. The awards are a great boost for Carbery’s cheese facility in Ballineen, one of the largest cheese-producing facilities in Ireland.

Speaking of the recent wins, Dermot Curtin, Carbery Group Cheese Production Manager, said they affirmed the high quality of the cheeses made at the Ballineen plant.

‘We place a huge importance on ensuring that the quality of our cheese is every bit as good as the reputation that precedes it. As one of Ireland’s leading producers of cheeses for the retail, ingredient and foodservice sectors, it is fantastic to see our cheeses being acknowledged for their quality by our peers in the industry,’ he said.