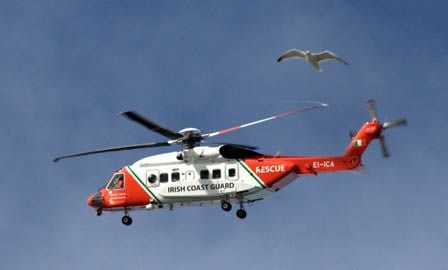 THE Waterford-based Irish Coast Guard rescue helicopter is on its way to try to airlift an injured fisherman from a Spanish trawler off the coast of West Cork after an earlier attempt by its Shannon-based counterpart had to be abandoned due to high winds and a heavy sea swell.

The 30-year-old man, believed to be suffering from concussion, has regained consciousness. The incident happened off the Mizen Head and the trawler is now heading for Castletownbere.

An oil tanker in the area is believed to have changed direction to come to the trawler's aid also.

Meanwhile, 922 homes in the Carrigaline area were without electricity this morning after a stormy night, which has left more than 2,000 homes affected nationally.

An amber wind alert remains in force this morning for the north and west coasts, though colder weather, with possible snow on higher ground, is forecast for Munster tomorrow.