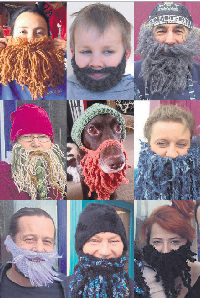 DYEING your hair blue is one thing. Shaving your beard or your back is another. But Baltimore takes the biscuit with its latest craze, the knitting of beards.

Don’t try and visualise it, just go straight to the Facebook page (Happy in Baltimore) if you want to see some photographs that will truly make you happy.

Of course, locals have already done ‘Happy’ in Baltimore – the Pharrell Williams song, that is. It was an internet sensation when it was filmed in the pretty village last year, and this initiative deserves to be one too.

Our collage shows just some of the locals who have opted to take part in the village’s latest pastime.

The local hotel, Casey’s of Baltimore, is hosting knitting groups, so too is Jacob’s Bar, and privately – in their homes – people are coming up with colourful concoctions that will go on collective display on Sunday, May 3rd as part of Baltimore’s May Bank Holiday celebrations.

In the meantime, one of the organisers of this community arts project, Sheelagh Broderick, confirmed that some of the beards will feature prominently in the upcoming St Patrick’s Day Parade in Skibbereen, on Tuesday, March 17th.

‘We decided to do a follow-up to last year’s project,’ said Sheelagh.

‘We wanted to do something that was fun, but something that also had a purpose, so now everyone has the opportunity to learn to knit and crochet,’ she told The Southern Star.

Loads of people have already posted comments on the ‘Happy in Baltimore’ Facebook page, saying they are delighted with the ‘Knitters & Natters’ group and the creation of their very first beard. The next meeting, between 2.30pm and 4.30pm, will take place at Casey’s Hotel on March 30th, followed by another on April 20th.

Everyone, it seems, is getting in on the act.

Even the youngest of children are determined that their beards will be the biggest and the best.

It’s all good fun and when the rest of the media gets a hold of this story it will run and run, which is more good news for the proactive and popular tourist village.

So, get your needles out, dig out that ball of wool from the back of the closet, and knit yourself some face furniture.