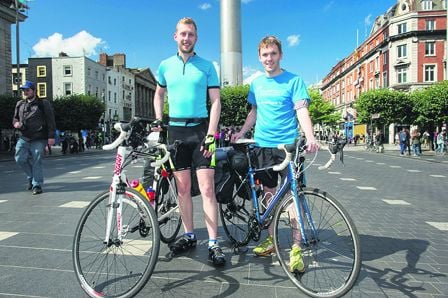 When he first put forward the idea of a 16-country cycle that would start in Dublin and end up on the tip of Asia, Sean Rowland pointed out a serious flaw in his work colleague Cian Whooley’s plan. He didn’t even own a bicycle.

‘We began work together in Accenture two years ago and I began throwing the idea of a cycle across Europe out there, even though the furthest I had ever ventured on a bike was 30km,’ Cian Whooley (28) says.

‘There was no plan in place, and I had yet to even purchase a bike, but we began discussing how we would plan the journey out. Last year we finally decided to take the plunge after cycling Mizen to Malin with minimal training and managed to survive. This will be a bigger step-up but we are taking rest days during the nine weeks to recover and see the countries we are going through.’

Last week the pair began the 4,500km at the Spire on O’Connell Street, Dublin, on journey that will finish when they reach Istanbul on October 5th. They will start by taking the ferry from Rosslare to Cherbourg and then embarking on a journey through the heart of Europe.

While it will be an adventure of a lifetime, both are fundraising for the epic journey.

A native of Ahakista, Whooley has seen the invaluable service that Bantry Hospital provides for such a large geographical area. Because it is located approximately 60 miles from Cork University Hospital, it is an essential first line service for the communities of West Cork, he says.

‘I have had family and friends in need of the services of Bantry Hospital, but large budget cuts have impacted greatly on the service. The cycle will hopefully raise some badly needed funds.’

Rowland will be collecting for Special Friends Mitchelstown charity during the Trans-European adventure, a charity very close to his heart.

‘My two-year-old niece, Rose, was diagnosed at birth with a rare neurodevelopmental disorder called Williams Syndrome. The condition is characterised by a number of medical issues, including cardiovascular disease, developmental delays and learning disabilities.

‘It affects 1 in 10,000 people worldwide, but requires constant medical attention. The charity is hugely dependent on donations and I have seen first-hand the extraordinary impact it can have on affected families.’

The pair raised more than €2,000 before they even got going, thanks to a well-supported pub quiz last week and after months of training and preparation, they are eagerly looking forward to getting underway.

Camp sites will be the main accommodation of choice, though Air B&Bs and occasionally hostels will be used to break up the monotony of pitching and taking down their two-man tent.

‘It felt a little surreal standing at the Spire waiting to go after two years of talking about it,’ Rowland admits.

‘I have certainly come a long way from someone who didn’t even own a bike 12 months ago,’ his colleague grinned, before they pushed off and made their way to Rosslare. For more, see www.rotharchallenge.com