a crystal jellyfish with a fish, photographed by Seán.

HAVE you ever heard of a sea potato? And did you know that jellyfish are one of the oldest types of animal on the planet? In fact there were jellyfish in the sea hundreds of millions of years before dinosaurs roamed the earth.

These are just some of the many fascinating things shared on a series of videos devised and filmed in West Cork called ‘Scoil na Mara.’

It’s an online series that celebrates Irish seashore and river biodiversity, encourages exploration of our wonderful coastal environment and nature, and highlights the importance of protecting water quality for a healthy environment and for our own well-being.

The brainchild of two local ocean enthusiasts, Mairéad O’Donovan and Seán Casey, the series inspires an awareness of wildlife in Ireland’s seas and in the aquatic ecosystems that are connected to the ocean. 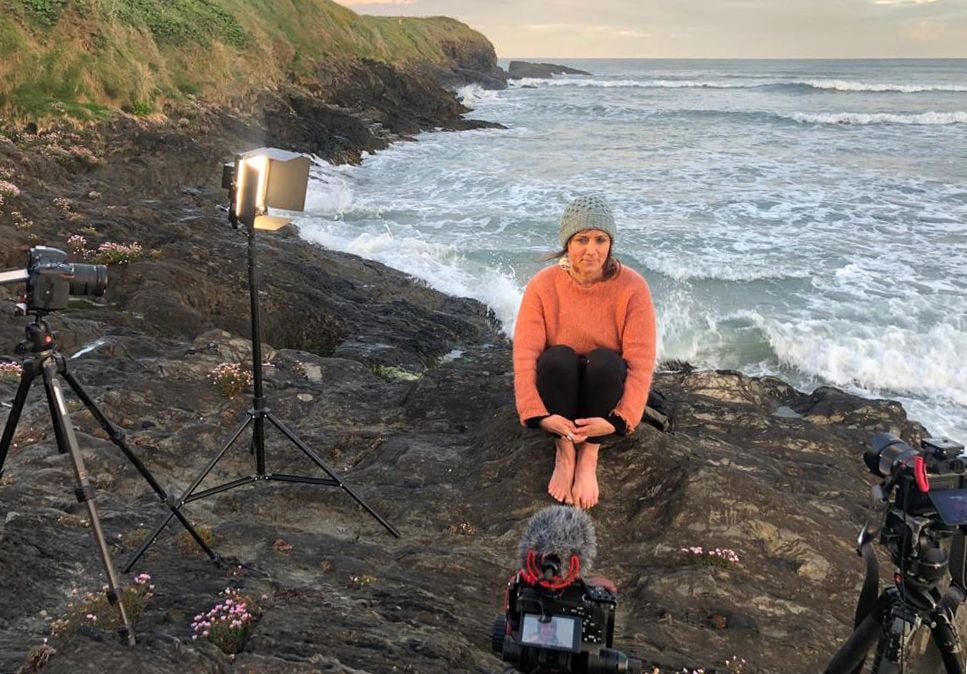 Mairead recording one of the new Scoil na Mara videos with Seán.

There have been almost 15,000 views of the videos since the series was conceived as a way to bring nature learning and connection to primary school learners during last year’s lockdown period.

Season two titled ‘Source to Sea’ was launched recently and over three episodes, viewers are brought on an exploration of different river, estuarine and coastal biodiversity, highlighting the link between water quality and healthy ecosystems.

Mairead is a zoologist from Castlefreke and Seán owns a dental laboratory, and is an ocean, surf and wildlife photographer and videographer. from the Red Strand.

‘We got to know each other nearly 20 years ago as part of the then quite small Long Strand surfing community,’ explained Mairead.

‘The Scoil na Mara project was something we worked on as a lockdown project last year and the positive response inspired us to produce the new season this year when Cork County Council and the Local Authority Waters Programme approached us to produce material to raise awareness about water quality.’

The latest videos are endorsed by the United Nations Decade of Ocean Science for Sustainable Development as an activity that supports the aims of the Decade to create an ocean that is ‘clean’ and ‘healthy’. Mairéad said: ‘The overwhelmingly positive response to the videos has been a heartening indication of people’s appreciation of biodiversity and the sea. We created the videos to advocate that biodiversity should be appreciated and protected. Children are exposed to a lot of negative information about environmental degradation so we want to show them what’s wonderful and worth protecting. We love featuring some of the lesser seen species and bringing them to life, to evoke a sense that there’s this whole treasure-trove of wildlife all around us in Ireland.’ Videos are available online via the Scoil na Mara YouTube channel.