Emma and James at the Lifeboat station in Baltimore. Photo: Anne Minihane.

In her latest interview with people who have relocated from various locations around the world to West Cork, Elaine Desmond catches up with local RNLI volunteer crew member James Kitt

JAMES Kitt follows the call of the sea in work, love and play. His magnetic needle points towards a nautical pole, not the North pole. He followed

his current to West Cork. Water is his way. James’ birthplace confirms his sea-bearing compass – he grew up in Poole.

Now almost merging with Bournemouth, Poole is in Dorset and is home to the second largest natural har- bour in the world and Europe’s largest. Sydney’s is the largest.

This location is also home to a marine conservation area and a complicated tidal sys- tem – similar traits to Lough Hyne, just a tiny trickle away from James’ new West Cork home by Baltimore.

Like his home town, his new West Cork location is also a summer-swelled des- tination with human figures and boat numbers increasing hugely as the temperatures increase.

James moved to Baltimore between lockdowns with his Cork girlfriend Emma.

This West Cork destination was the chosen spot due to their shared love of sailing.

In Baltimore the couple can continue to race their favoured boat, the 1720s Sportsboat class. The numbered name is taken from the year of birth of its founder’s yacht club.

Emma and James met at a 1720 racing event in the US on Rhode Island.

Competing against each other then and now, they continue to almost clip keels.

Depending on the race results, they sometimes have to give each other wide berths for a while afterwards.

Another link with Baltimore and James’ previous life is the RNLI with its strong lifeboat presence here.

Entering the village before the last stretch of squiggled bends on the R595, the lifeboat station marks itself before the harbour, a backdrop of many photographs and paintings.

It is a beacon before The Beacon! 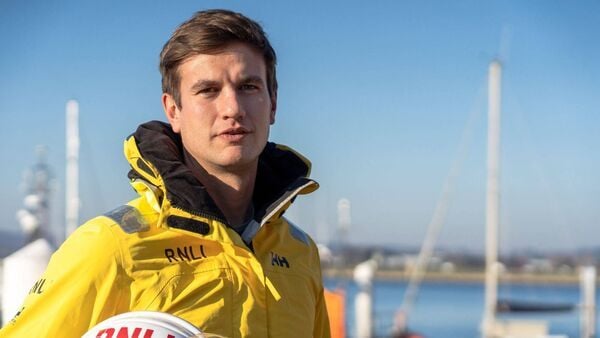 James previously worked as a fundraiser for the RNLI at its home base. Where else but Poole?

Here lifeboat crew members also train at the RNLI college. The volunteers don’t try to save most people, their mission is to save all.

Training is a vital part of saving lives and fundraising is vital to ensure the life of a lifeboat.

It is almost the only way. Over 90% of funds arrive via donations, the remainder generated via sources such as investments.

The RNLI does not receive government funding from Ireland or the UK.

Not only was James an RNLI fundraiser, he was also a crew member at Chiswick on London’s River Thames – the second busiest lifeboat station in both Ireland and the UK.

Tower Lifeboat station, also in London, is the RNLI’s busiest.

Naturally he was welcomed aboard and is now a volunteer on the inshore lifeboat (Rita Daphne Smyth).

He praises the villagers. ‘Everyone was very welcom- ing and provided great sup- port.’

He recently returned from the capital, Lilongwe, where he assisted with the provi- sion of hand washing facilities and assessed other areas for maintenance and repairs.

The aim is to provide sus- tainable water points with an emphasis on social enter- prise. Pump Aid’s motto is ‘Beyond Water’.

'Maybe it’s a bit of a drive to Bantry cinema'. But he says he misses nothing really. It’s easy to see why James and Emma are currently house hunting – their watery roots have found
the shore. Water place to be in West Cork.

When summing up his reason for volunteering as a lifeboat member it is, 'to put yourself to use – to give back to the community.'

People are always glad to see a welcome lifeboat arrive when needed and West Cork is glad to welcome James.

Read more from our Welcome to West Cork series here.