The Katsikas refugee camp in north-west Greece, which is a former air force base originally converted to host around 350 people and now ‘home’ to around 1,200

The Katsikas refugee camp in north-west Greece, which is a former air force base originally converted to host around 350 people and now ‘home’ to around 1,200

Fred in the woodwork space which he supervises

Two young people from West Cork are volunteering in Greek refugee camps where, despite the challenges of Covid, they’re making a real difference to the lives of those seeking asylum

A WEST Cork man went from spending lockdown with his parents in Glengarriff, to volunteering on the front lines of the refugee crisis in Greece.

And working with people whose lives have been heartbreakingly torn apart by conflicts, has given him a new perspective on the cost of wars.

Fred Gilbert Downs was actually travelling in India when the pandemic hit last year and the country went into lockdown.

‘After a month’s stay with 12 other backpackers in a very small and sweaty apartment, I got a repatriation flight back to Ireland,’ he explained.

‘Like many others, I found myself living at home with my parents for the first time in six years. It was far from what I planned but I was also so grateful that I had that safety net, that when things went wrong my country helped me home and I had a place to go,’ he said.

The experience made him appreciate the security that he had previously taken for granted.

‘And, moreover, the lack of security that so many less privileged people have around the world,’ said Fred.

Working in the humanitarian field had always been on his radar after studying Jewish and Islamic Civilisations in Trinity College.

‘However, after my four years were up I decided to move in a different direction and began working in kitchens with the intention of becoming a chef. It wasn’t until the pandemic hit that my interest was reignited and, after a year of lockdown in Glengarriff, I applied to volunteer in Greece.’

He’s now with Habibi Works, an NGO that provides a maker-space for refugees in Katsikas refugee camp in north-west Greece. It’s a former air force base originally converted to host around 350 people and now ‘home’ to around 1,200, a number that’s growing all the time.

‘The population of the camp consists of men, women and children from Afghanistan, Iraq, Kurdistan and Syria who live in prefab containers tightly packed between the rusting airplane hangers. Conditions are already overcrowded for the residents but we’re anticipating the problem to worsen as the Greek government is emptying the camps on Chios and Samos and sending people inland to camps like Katsikas,’ said Fred.

Habibi Works, implementing help since 2016, is around 300m from the camp and consists of 12 different working areas in which people create, learn, teach and meet. 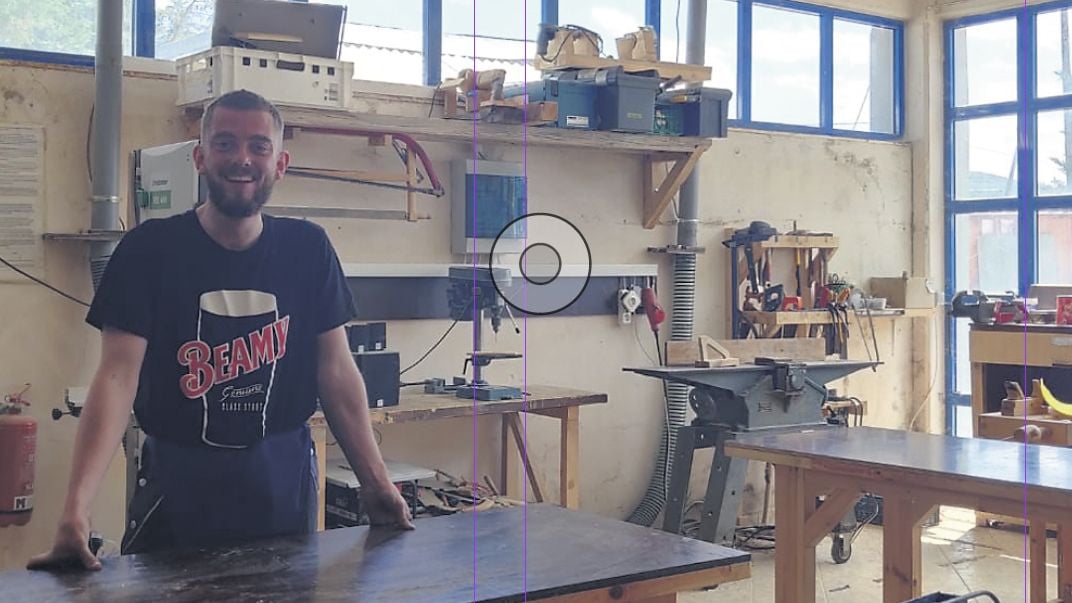 Fred in the woodwork space which he supervises 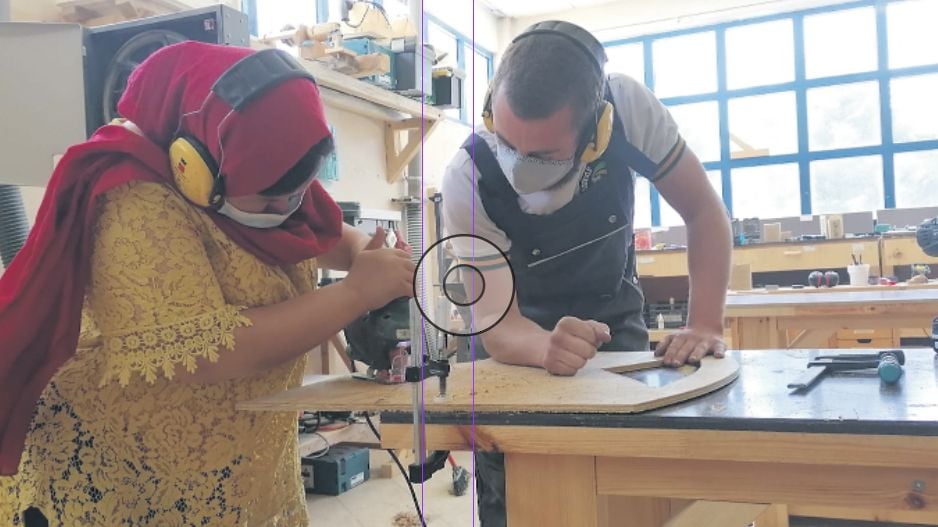 Fred explains: ‘We offer the community a chance to regain some control over their lives through the working spaces. They offer practical facilities in fields such as metalworks, sewing, digital lab, woodwork and bike repair, the latter two which I supervise.’

A typical day, if one exists, sees Fred take three appointments every two hours between 11am and 6pm.

‘There’s quite a wide range of things people tend to make, the most popular being shelves for their cramped containers. But, we also often get unusual projects, for example last week we had a man making a bird cage and also a woman made a music stand for flute rehearsal.’

There are three main languages spoken in the camp, Farsi, Arabic and Kurmanji, so communication can be a little difficult at times, admits Fred.

‘However, one of the brilliant things I’ve discovered here is that when you are creating things together, you don’t need a common language. In a similar way to sport, creativity doesn’t need a language to be understood, it speaks for itself. For me this has been an amazing way to connect with people without sharing a language.’

Currently Covid presents the biggest challenge to Fred and his fellow volunteers.

‘On more than one occasion positive cases have been moved here from different camps causing lockdowns where people have been forced to quarantine in the same container as those who have tested positive.’

The hardest thing, Fred says about his work, is the emotional aspect of it.

‘Coming here has been the first time I had really been confronted with the true impact of the war in Afghanistan and the Iraq war.

‘I was six when the US-led coalition invaded Afghanistan and nine when they invaded Iraq. During the 20 odd years since then, news stories from those conflicts have become a weekly occurrence and you become accustomed to it, it’s almost normalised.

‘But, since being here, and working on a daily basis with people whose lives had been torn apart by those conflicts, I can really understand the cost of those wars. It’s heartbreaking at times.’ But there have been plenty of positives.  ‘A few weekends ago it was a beautifully sunny day, residents from the camp were sitting outside in the field next door.

Families were having barbecues, the kids flying kites and playing football, and everyone was just enjoying the good weather. It felt like going to Barleycove as a child, and it may be a cliché, but it reminded me that people in extraordinary and difficult circumstances are still just people like you and I.’

He stays in an apartment in the city, and is in a bubble of over 30 people.

‘On the weekends we normally do things together. Last week we spent three days camping on the beach and the weekend before that we went hiking in the spectacular Balkan mountains.’

Fred’s current plan is to volunteer for six months, but that may change. Although born in the UK, his family moved to Glengarriff when he was only two months old.

His father Damon is a recently retired carpenter, and his mum Barbara works with mental health services in the area. ‘In-between primary and secondary, and when my brother was in transition year, our parents decided it was time to show us there was more to life outside of school and The Simpsons. We rented out our house for a year and went to South America, Australia, New Zealand and India.

‘It was truly life changing and a remarkable parenting move – and one that I’m eternally grateful for.’

People can be trapped for years on the island 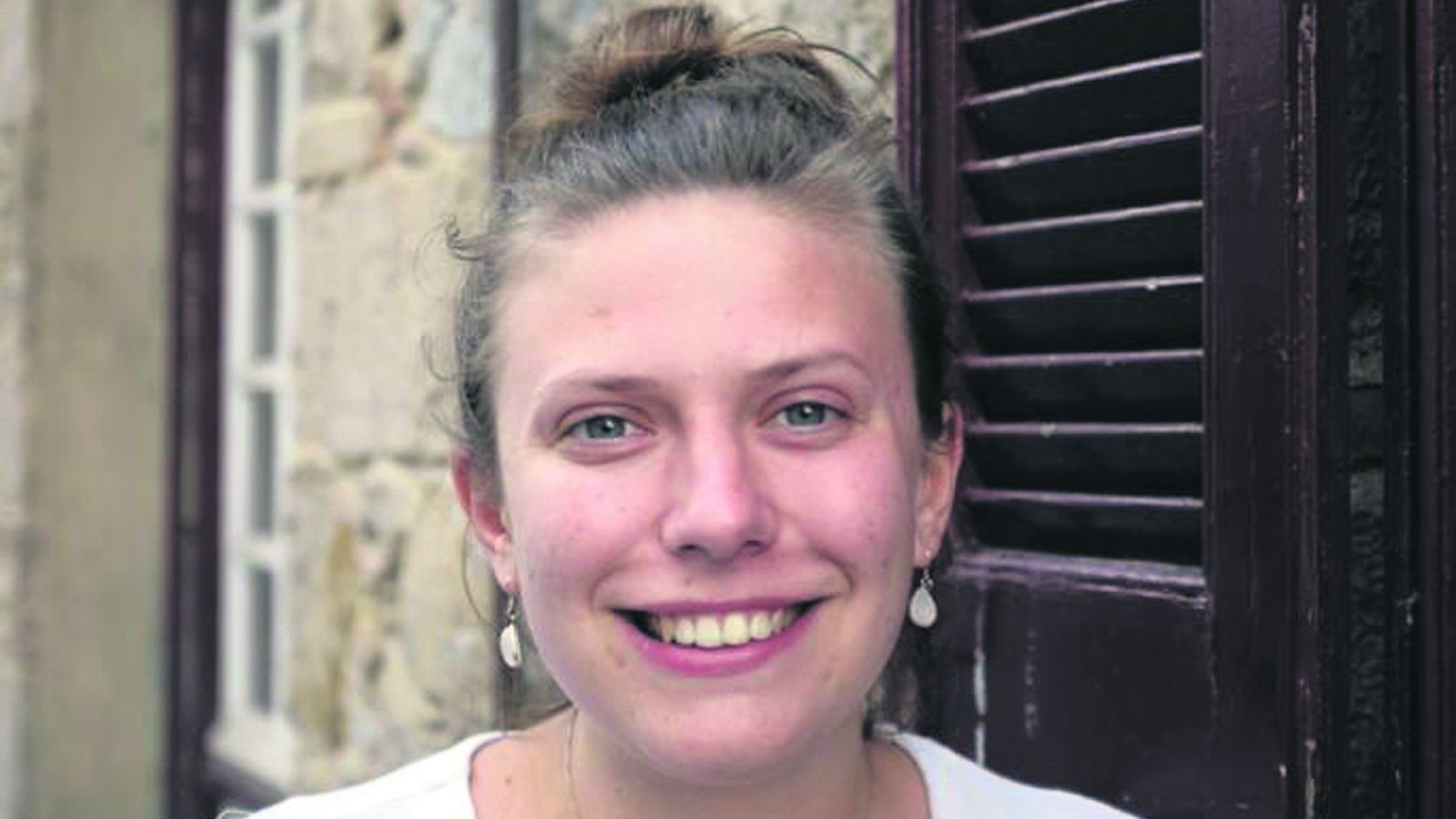 Amy Boyden from Bantry has been volunteering as an independent humanitarian aid worker at the new refugee camp on the Greek island of Lesbos for the past two months.

‘There are approximately 6,000 refugees in this camp, 2,000 are under the age of 18. The camp has restricted access for entry and exit, and only one member from each household can leave the camp per week. The tents are small and have hardly any ventilation. In some cases two to three families share these tents, some get along and others don’t,’ said the UCC law graduate.

‘Within the camp I help with distribution and outreach programmes. This includes providing clothing for babies, children, teenagers and adults. I also teach adult English classes to beginners and basics.

‘When people arrive here they have to apply for asylum. They can spend months to years trapped here due to the inadequate resources available for asylum processing. When and if their asylum is granted, many face a transfer to mainland Greece where they have more difficulties accessing services and are often left alone to navigate the complex finance, medical, and legal systems.

‘As a European citizen I feel obligated and compelled to raise awareness within this humanitarian catastrophe,’ said Amy who plans to study public international law in the Netherlands later this year.

*To donate to either cause, Amy has a GoFundMe page, or see launchgood.com/habibiworks