Gary with his siblings Lynda, Una and Noelle at his god-daughter Rori-Mae’s christening.

An avid sports player who was looking forward to embarking on a career in agriculture  has been in hospital since last July after suffering a bleed on his brain. Now his family
and community are doing everything they can to help him on his journey back home

A West Cork community is rallying around a young man who is waiting to get life-changing treatment in the country’s national rehab unit.

Gary Hartnett, from Ardgroom on the Beara Peninsula, suffered a catastrophic bleed on his brain last July.

The 21-year-old was rushed from his home to Bantry General Hospital (BGH), and from there to CUH where he remained until December 3rd. 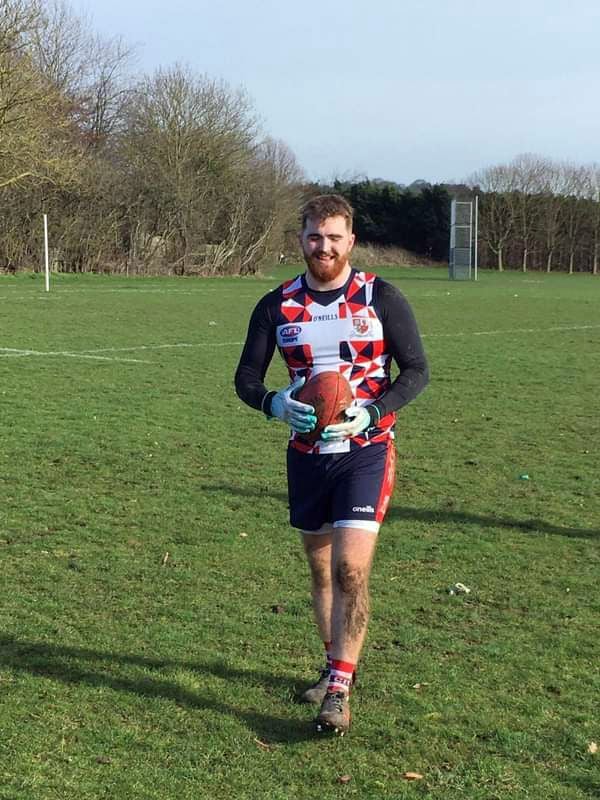 At the time of his injury Gary, was an avid AFL player with CIT and Leeside Lions.

The Ag Science student at CIT and keen sportsman is now back in BGH and is facing a 10-month wait before a place is available in Dun Laoghaire for his further rehabilitation.

At the time of his injury Gary was an avid AFL player with CIT and Leeside Lions, and was a member of Beara Macra Na Feirme.

The technical name for what Gary has suffered is am AVM (arteriovenous malformation). He suffered a similar AVM in 2012 when he was 13. He recovered from this and life continued, but this time around his challenge is greater.

His older sister Una said: ‘As a result of the AVM, Gary has to learn to do most things that we take for granted –  to walk, regain his motor skills and speech.’

His family have launched a GoFundMe page called ‘Giving for Gary’ to help with costs related to his treatment and the response has been phenomenal, with over €120,000 raised.

She recalls the day her only brother’s life was turned upside down: ‘He was at home and it was nearly dinner time. He was complaining of a banging headache. My mother went to get a paracetamol and when she turned around he literally couldn’t bring his hand to his mouth to take it. My father went to bring him to SouthDoc, but by the time they got outside he was begging to be put down on the lawn and an ambulance was called,’ she said.

He was prepped for surgery in BGH, and was lucky to make it to CUH, she said. He was treated there for over four months, much of which was spent in the intensive care unit.

Restrictions imposed by Covid-19 have added to the family’s trauma. Gary’s parents Tommy and Ann each had just a single 15-minute daily visit with their son in the ICU, and nothing at all during the six weeks of the last lockdown, which was very difficult for the family.

When Gary returned to Bantry, Una said her brother communicated the word ‘home’ to them, and while upsetting, she said it shows his awareness.

The Hartnett family are well known throughout West Cork. Tommy, a farmer, also runs Hartnett Coach Hire. Gary is the third of four siblings. Una is the eldest, and he also has sisters Noelle and Linda who all live locally. He is godfather to Una’s 18-month-old daughter Rori-Mae (Henshaw). Gary at his god daughter Rori-Mae's christening, in November 2019.

‘We’re delighted to have him back in Bantry as he really needs to see his family,’ said Una who plans to close the fund shortly. ‘And we want to thank the community so much for all their help which just means so much to us.’

Among the donations made to the GoFundMe account are sums of €1,000 from both Drinagh and Castletownbere Co-ops; €1,000 from Bere Island Boatyard and the same amount from Cork Bar and Catering Equipment and €1,050 from Beara Top Tyres.