A pilgrimage through continental Europe on a bicycle, following the patron saints of motorcyclists brought plenty of excitement to West Cork man Michael McCarthy, including a close brush in Italy with a spaghetti junction

A BRIEF conversation with the secretary of the Irish Friends of St Columbanus brought this saint to my attention. The more I learned about him, the more interested I was in recreating his path throughout Europe.

Past popes and heads of state all have referenced the importance of this Irish saint in contributing to the early formation of Europe.

St Columbanus came from a wealthy Irish family, yet he chose to follow a spiritual path. This was of great disappointment to his family but he would not change his mind. He was an uncompromising character which brought him into conflict with other established orders of monks, ruling monarchy and even the pope of the time.

Today we would call him a free spirit, something which I can relate to and it explains why he is the patron saint of motorcyclists.

I arrived in France via boat and made my way to Saint Melo which is the first stage. The next stage was St Columb. It is named after St Columbanus as this is where he first landed in Europe with his 12 fellow monks around 570AD. A smile came to my face when I spotted a statue of St Columbanus on the edge of the town.

I stopped and said a little prayer asking for protection and guidance on my trip as I attempted this adventure. I cycled through the French countryside working my way along the coast of Normandy. 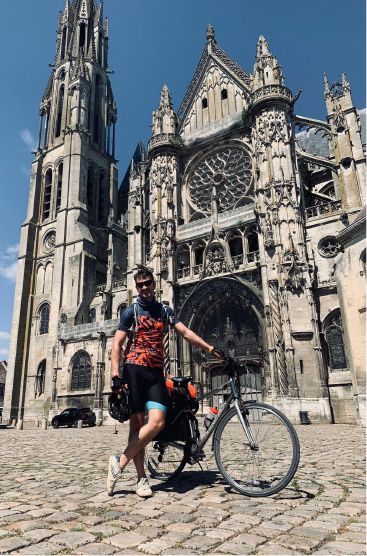 One of the many beautiful churches in France. This is taken in the picturesque town of Senlis, close to Paris.

I continued to make good progress through France. I earmarked Paris as an important place as it was close to the halfway point.

After another week's hard cycle I arrived at Luxeil de Bains. This was a town which developed around the Abbey built by Saint Columbanus and became a centre of trade and education. I had the great privilege to spend two nights in the monastery which still hosts pilgrims and is now a private school.

There was an impressive statue of a fierce looking Saint Columbanus in the courtyard. I was proud to say that this beautiful town developed because of this Irish man.

A local family here welcomed me into their home and I enjoyed the homemade food and company.

The next stage started in Basel, Switzerland. I had to cycle 150km to connect the end of the French route with the start of the Swiss one. At this point I had covered over 1,200km and I felt tired. Fortunately, or through the aid of St Columbanus, I had stumbled upon a festival devoted to the Mini car. And of course the Irish had sent representatives! Irish mammies started appearing from every direction. I was directed to a table while various foods and beer were presented to me. 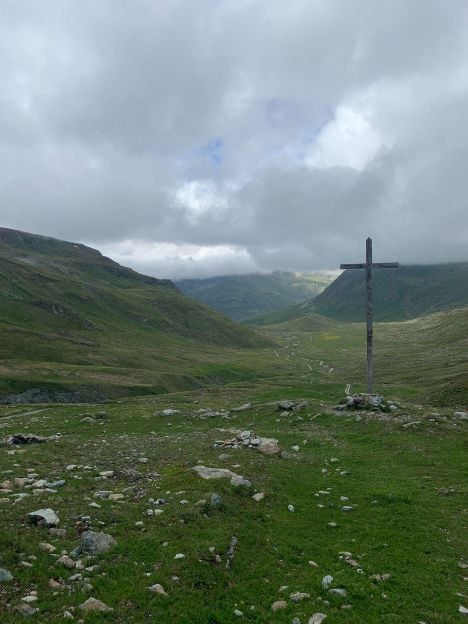 The Alps in Switzerland was th highest point of Michael’s pilgrimage. ‘A difficult cycle but exceptional scenery,’ he said.

Following my weekend revival, I made rapid progress at the beginning of the Swiss stage. I was enjoying the novelty of border hopping between Germany, Austria, Switzerland and even Liechtenstein. However, at the half way stage of Switzerland the mountains become more prominent and my progress slowed down on the steep inclines. The final three stages of Switzerland were gruelling. It was a difficult ascent up the mountains with all my gear loaded on my bicycle. 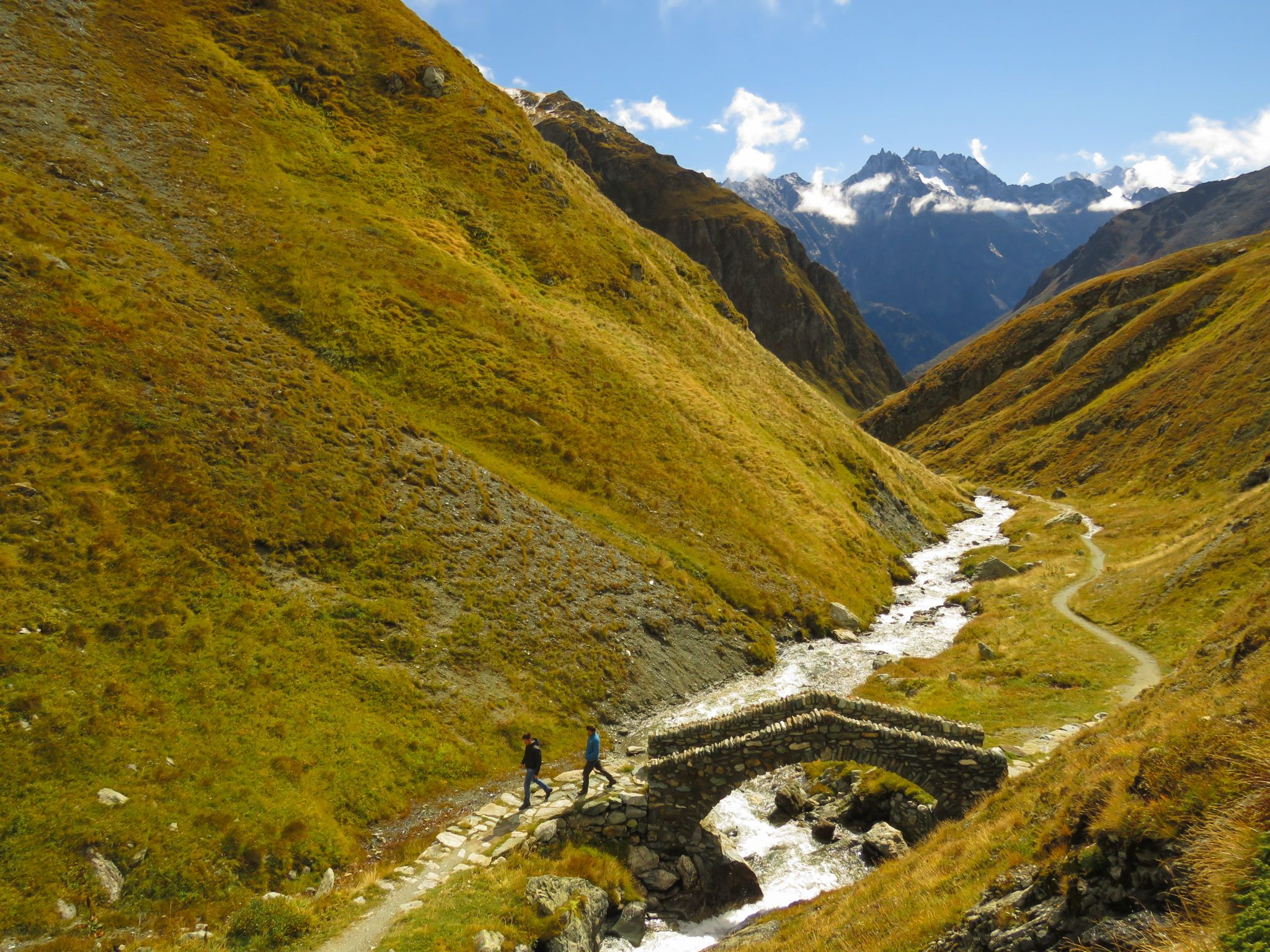 Michael found the Septimer Pass awkward and exhausting as he had to lift his bicycle over large rocks and through rivers.

After a two-day climb I reached a height of 2,300m. I had no choice but to walk my bicycle down the majority of a path known as the Septimer Pass. It was awkward and exhausting as I had to lift my bicycle over large rocks and through rivers. I was greatly relieved to return to the road, relatively unscathed, despite several near falls and a slipped chain.

Crossing into Italy, beginning the Italian stage was an easy experience with an almost 7km downhill descent. I rested two nights in Lecco by Lake Como as I wanted to let my body recover after the high mountains of Switzerland.

It was near here that I had my most frightening experience. It was quite the irony that in Italy it befell me on a spaghetti junction. In the heat of the moment with a plethora of turns available, I took a wrong turn. I immediately knew something was wrong as I cycled towards the large tunnel and saw there was no cycle lane. In my panicked state I made an even worse decision and decided I'd get off on the next exit. No exit appeared. I cycled 5km into the tunnel. I somehow managed to cross the lane and walked my bicycle back. To my great relief after about 20 minutes walking I heard the glorious sound of sirens. I was spared.

A motorway safety crew were sent to rescue me. After the drama I cycled on through the north of Italy towards Milan and stayed in a town called San Solombano Al Lambro. The following day would be my last day of the trip it took me over 12 hours to reach Bobbio To see a statue of St Columbanus and to know that my 2,000km-plus journey had come to an end was a relief.

I spent two more days in this town which resembles something from a fairytale. And I was presented with a certificate by the local priest to mark the cycle. 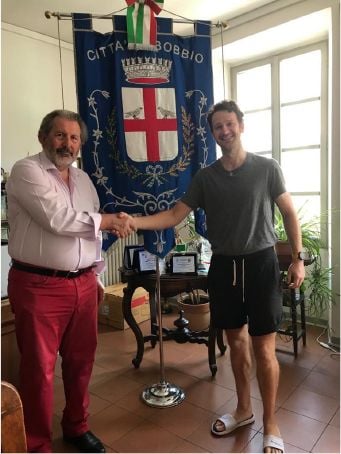 Michael meeting the mayor of Bobbio, the town where St Columbanus died.

Over the two days in Bobbio I visited the crypt of St Columbanus each day. I said a prayer thanking him for his protection and asked for him to help in returning home.

It is my hope that other Irish people on bicycle or foot will follow this pilgrimage or attempt some form of it.

This is a saint that has a unique connection with Irish people. In a Europe that struggles with a common identity, the route of St Columbanus provide a meaningful opportunity for a cultural exchange.

There are spiritual benefits, too. The trip provided me a space to contemplate things in my faith and in my life during my long cycles each day. No day was ever the same and when the day was undertaken with a certain reverence I was graced with insights into my own life and spiritual journey thus far.