Mary is just the third female Cork county mayor, but hasn’t experienced any sexism and says she couldn’t have worked with a nicer bunch of people in County Hall.

Mum-of-five, Independent Councillor Mary Linehan Foley reflects on her year as county mayor, ahead of handing over the chain of office later this month

WHEN county mayor Mary Linehan Foley took over the office last year, we already had one lockdown under our belts so she had some inkling of what it was like to work during a global pandemic.

But she had no idea that most of her year in the position would take place under Level 5 restrictions.

But Mary, as she insists on being called, doesn’t feel she was shortchanged in the slightest, despite most events taking place remotely.

‘You have to make the best of what’s thrown at you in life. I’m a very positive, glass half full person and you have to work with the cards you are dealt. My life has been colourful at times and I’ve just had to rock on, and that’s what I did this past year, despite the challenges,’ said the 54-year-old.

Her political career spans over 20 years. Politics was always in her blood, and growing up in the Moby Dick pub in Youghal, she followed her father Paddy’s footsteps and joined Fianna Fáil, and was mayor of her home town on three occasions.

However, in 2014 when she wasn’t included on the party ticket when municipal districts were being set up, she made the radical decision to leave the party and become an Independent. 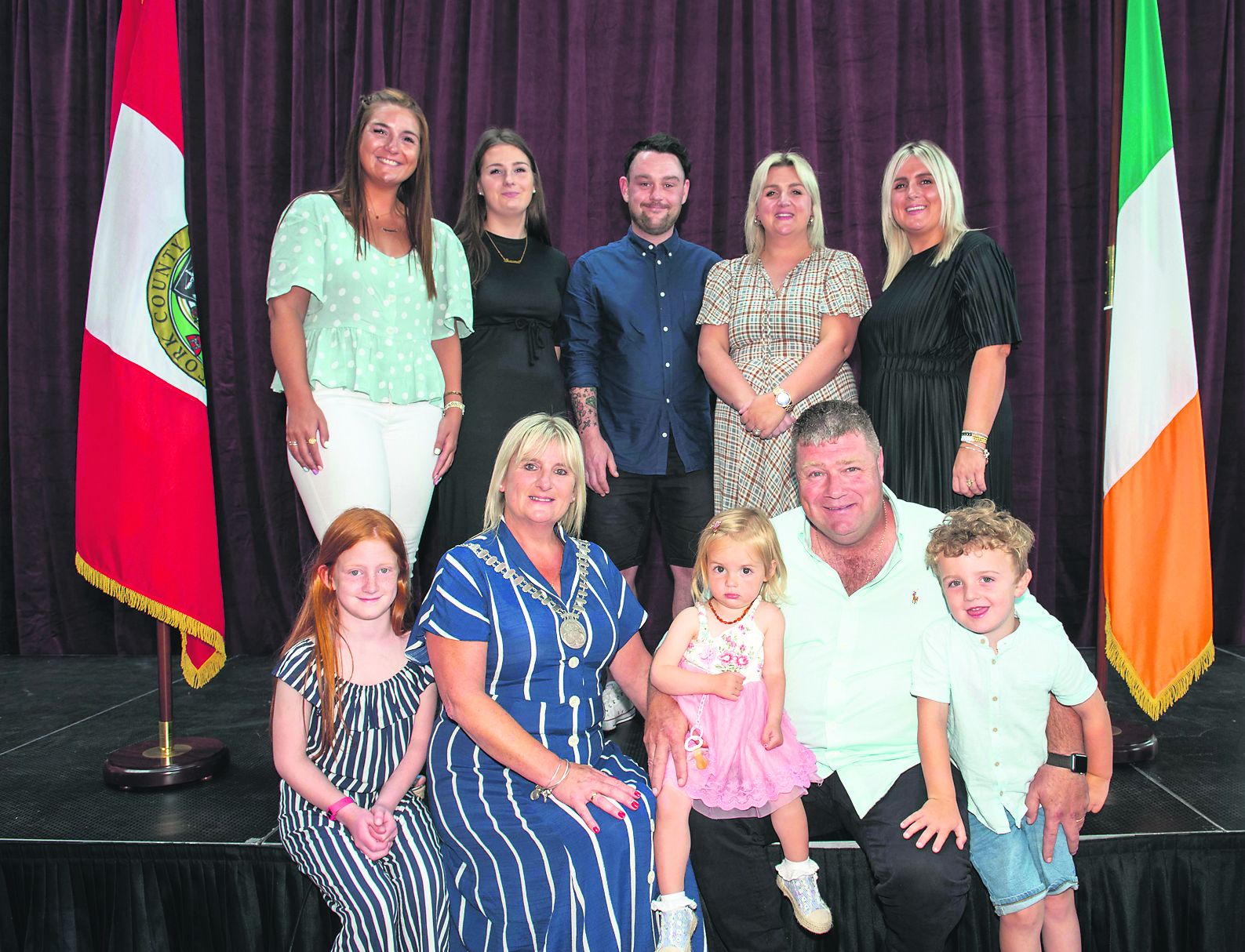 Mary, on the occasion of being made mayor, with her husband John; children (from left) Dainia, Shauna, Kane, Gemma and Clara along with her grandchildren Mia, Croía and Harry. (Photos: Brian Lougheed)

She had considered leaving politics entirely, but in her typically resilient way, she went on to become Cork’s third female county mayor.

‘It was lashing rain that day back in June, and it’s a day I’ll never forget. I never dreamed it would happen,’ she said, in full appreciation of the honour.

In her personal life too she’s had to overcome adversity. She’s spoken out before about being born in Bessborough Mother and Baby Home, and her quest to find her birth mother, which was successful. She feels she’s ‘one of the luckier ones’, but the Commission of Investigation into Mother and Baby Homes this year, she says, was ‘tough reading.’

‘I’d also had first hand information of what happened from my mother and it wasn’t very nice,’ she said.

She became a mum herself when she was just 18, giving birth to daughter Gemma (now aged 36) and was a single mother for six years.

‘My life hasn’t been all sunshine and roses,’ said Mary. ‘I’ve had to pick myself up and get on with things. We’re not the Brady Bunch,’ she admits honestly.

‘We’re not privileged and have had to work for what we have and I feel that’s helped me with what I do. It’s given me empathy for people who are looking for help with things like social housing, because I can relate to that, I’ve been there before, and it’s shaped me,’ she admits.

Dainia and Shauna, who is studying criminology in UCC, have been at home with Mary and John since the pandemic hit and have doubled up as her IT dept when Mary had to embrace technology. Chairing council meetings with up to 80 people was a challenge at the start.

‘The girls were a great help with that, especially at the beginning and would sit with me for a bit at meetings until I got the hang of things. It’s all second nature now. It was also great to have them around, too, just to get me off the computer and out for a walk in the evenings,’ she said.

She describes John as ‘the quiet one in the family.’

‘He’s the man behind the woman and he keeps the show on the road,’ she says. None of her children have followed her into politics – yet – and while gender quotas have improved, she feels there’s room for more work to be done in this regard.

‘Back when I was a member of Fianna Fáil, it was tough to be a woman, but I’d hope things would have improved in the party by now. And back in 1999, I was the only woman on the town council in Youghal. 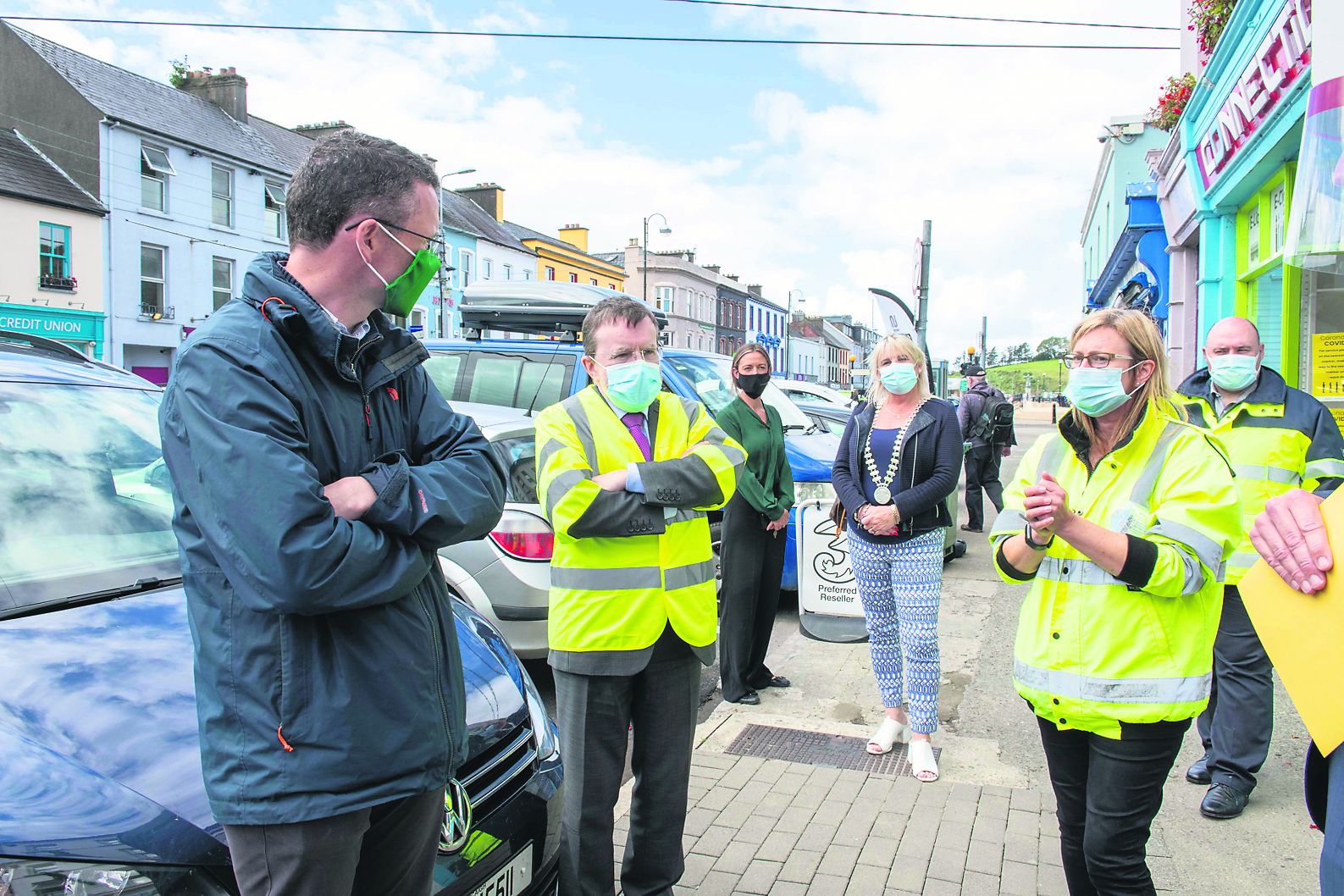 The county mayor in Bantry meeting Minister of State Patrick O’Donovan, following flood damage to the town caused by Storm Francis. Unlike other mayors, she didn’t use a driver due to Covid, but availed of help from her husband on busier days.

Personally, though, I’ve never experienced any sexism or chauvinism and I couldn’t have worked with a nicer bunch of people in County Hall. I’m a straight talker, and I don’t think I was ever treated any differently because I was a woman.’

Dainia, she said, is the child most involved in her work, and Mary says her children have seen firsthand how demanding a life in politics is.

Because of Covid restrictions, she declined the use of the county mayor’s car and a driver, which was first introduced in 2018 amid some controversy.

‘One day, though, I was in Bantry, then I had to go to County Hall, and on to Youghal and it was exhausting. After that John drove me on busier days. I’m almost in Waterford really and I’d be in Dublin as fast as I would be in West Cork!’ she said.

A highlight of her year is the community spirit she witnessed, which is something that will stay with her.

‘Everyone rolled up their sleeves and got stuck in, put their shoulders to the wheel and did what they could,’ she recalls.

She hopes her legacy is that she’ll be remembered as a mayor of the people, and that she ‘led in the right direction’ during the pandemic. And her advice to the incoming mayor, taking the position later this month, is to ‘relish the year, because it will fly by.’