Killian’s siblings describe him as ‘extraordinary,’ and said he loved his life in London, loved to travel, sports, and spending time in his beloved West Cork.

PEOPLE all over West Cork and beyond will this Easter be remembering the courage, resilience and strength of Barryroe man Killian Lawton.

The avid sportsman was diagnosed with a rare form of cancer in his chest cavity in April 2020 at the start of the pandemic when he was just 23, and despite an incredible fight, he died last July.

His family and friends are now urging people to run, walk, or cycle either 5km or 10km any time from Friday April 15th to Monday 18th (Good Friday through to Easter Monday), to raise funds for Marymount where Killian spent his last three weeks.

After his initial diagnosis Killian went through many rounds of chemo in Cork. This was followed by stem cell replacement therapy, more chemo, followed by nine weeks in an isolation ward in St James Hospital in Dublin.

Most of this he went through alone, given the restrictions of the pandemic.

‘We thought this would mark the end of it – that he’d need surgery to get rid of the tumour mass – yet, unfortunately, Killian just never caught a break,’ said his sister Nora.

‘By the time he had finished the treatment in Dublin, his cancer markers started returning to high levels. It was spreading to his shoulder and lower back. The team in CUH were planning surgery on one tumour, only to have to start planning the next round of treatment (a mix of radiotherapy and chemotherapy). It all happened so fast.

‘Killian fought it right to the very end. He never gave up. He always had hope. The word resilience is often overused, yet in Killian’s case, his resilience was on another level.’

He was one of five siblings and they describe their brother as ‘extraordinary.’ 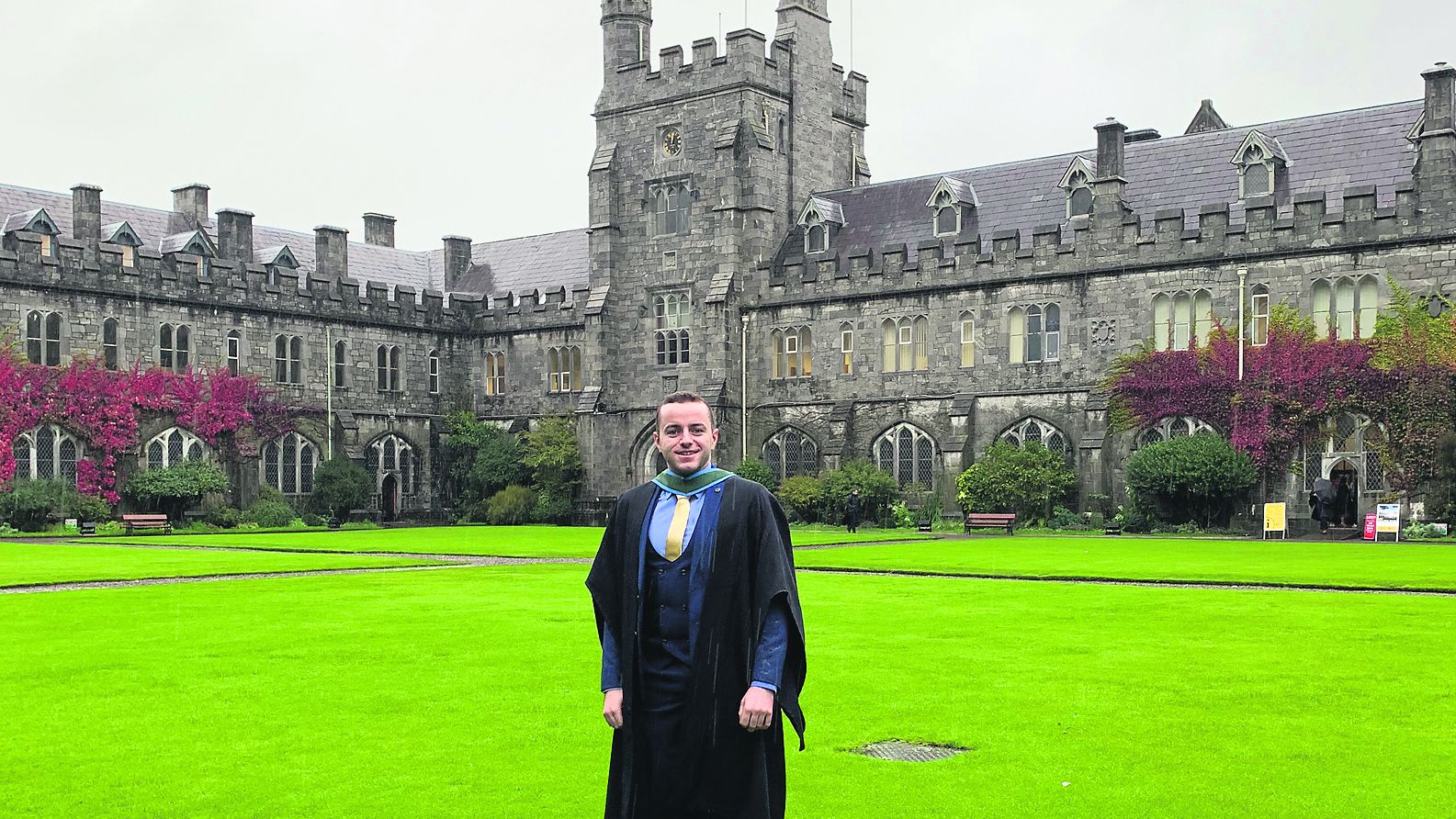 Killian graduating from UCC in 2019 with a BSc in financial mathematics and actuarial science.

Naturally intelligent, he graduated from UCC in 2019 with a BSc in financial mathematics and actuarial science and spent nine months working in an investment management consultancy, River & Mercantile, in London.

‘He loved life in London. It suited him,’ said Nora.

‘Killian loved to travel, he loved to read, he loved coffee, he loved all sports. He loved days at the beach, at his beloved Dunworley, with his nephews. He loved quizzes and always came in the top three of our Friday night lockdown quizzes,’ she remembers.

Brother Barry added: ‘Killian was hugely popular. He had so many friends, from Barryroe, Clonakilty Community College, never mind his college crew. He got on great with everyone.

‘He worked in the Lifeboat Inn in Courtmacsherry and in Barryroe Co-op with my dad Pat. He worked part-time in the international students’ office in UCC, so he got to know a lot of people around campus, plus so many people knew him through the GAA.’

Sport played a huge part in the young man’s life.

Paul O’Connell spoke with Killian a few times during his illness, which was a huge boost for him.

‘Also one day on his way home from CUH he got chatting to Seán Óg Ó hAilpín at the Quirkey Kitchen in Innishannon, run by his wife. After that he used to stop in there to talk to him – there was one occasion last June, after a particularly hard meeting – Seán Óg sat down to have lunch with Killian. It helped take the focus away from an incredibly difficult diagnosis and it just helped Killian forget about everything for a while – talking about legendary Cork GAA moments with Seán Óg and some of the more important things in life.’

Brother Padraig explained how Killian’s friend Seán Holland from Barryroe, arranged for the Munster team to send a video message during his first few days in Marymount.  ‘Some of the players were in South Africa at the Lions Tour and went out of their way on a match day to record that message. That meant so much. Killian was buzzing after that.

‘Another friend in London had Chelsea’s Ben Chilwell lined up to speak to him after the Euros. Unfortunately, at that stage Killian was too sick for the call. He did watch the Euros final, though, and was delighted that football was going Rome.

‘The Chelsea squad sent a letter to Killian in July. It was signed by club captain Cesar Azpilicueta. It seems they didn’t pay enough postage, so the letter only arrived on September 8th which is Killian’s birthday. We felt it had to be a sign.’

Killian cared about social issues too and was always collecting and donating to charities like Trócaire and Concern.

‘Back in June 2020, during his first rounds of chemotherapy, Killian was emailing American public officials about what happened to George Floyd,’ said Nora.

This Easter weekend Killian will be remembered – along with fellow West Cork people Alice Crowley and Michael Clancy, who died in 2018 and 2020 respectively, with the fundraising virtual run/walk/hike in aid of Marymount Hospice.

‘To date, over 200 people have signed up. We have supporters taking part all over the world – in places like Cork, Kerry, Kildare, Roscommon, Mayo, Dublin, London, Brussels, Barcelona, France, Abu Dhabi, Sydney, Turkey, Seattle and Washington DC,’ said sister Eimear.

‘My dad, my nephews and I did a Christmas swim for Killian and that raised an incredible €10,000 for Marymount. Around the same time, Alannah Crowley mentioned how the 2020 run had been held for her mother Alice. Her family raised over €18,000 for Marymount and she asked Barry if we’d like to arrange the 2022 fundraiser in memory of Killian. Alannah and Barry are friends from school and lifeguard days at Inchydoney. Alannah also knew Killian from surf-life saving lessons,’ she said.

Marymount was a ‘home away from home’ in Killian’s final days, said sister-in-law Ciara.

‘No words will ever capture the care administered in this unique hospice. The team in Marymount, they are a phenomenal bunch of individuals, from the doctors, nurses, healthcare assistants, to the catering team, the ward managers, the reception team,’ she said.

‘We were walked into Marymount very gently by the team at The Glandore Centre in CUH. They went above and beyond to make the necessary arrangements before Killian agreed to going to Marymount (for what we ultimately thought was pain management, rather than palliative care). He was just so sick at this stage. As soon as he was admitted to Marymount, their care just takes over. It’s incredible.’

The family said that everyone made Killian’s last few weeks as comfortable and as safe as possible.

‘They looked after all of us,’ said Ciara.

Right now Killian’s power and strength is helping give his family strength.

‘My best memories of Killian are of us all out pucking ball in the garden with my boys, Sean, Conor, Cathal and Cian (his godchild),’ said Padraig. ‘He loved this, almost as much as they loved going for ice-cream with Killian. We did this until two or three days before he was admitted to Marymount. Incredible stuff really.’

Barry recalled how Killian loved the family picnics, and days out in Trá Lispeen or ‘Granny’s birthday lunches in Glandore.’

Nora added: ‘When we think of Killian before his cancer diagnosis, we think of his vibrancy and energy. A lightness radiated from him. Luckily for us, and despite all the challenges (of which there were many), he held onto this until the very end. He really was the best. Smart, kind, funny, always up for the craic!

‘Killian never really complained during his treatment, no matter what pain he was experiencing.

‘It’s heart-breaking to think about it, so we try not to dwell on it too much.’

Killian was laid out in one of his favourite Cork jerseys, the black MacCurtain and MacSwiney commemorative one from 2020.

‘When Seán Óg heard this, he messaged to say Killian is a mighty Gael in the true sense and he won’t be forgotten,’ said Eimear.

‘A big group of us are going to the Belgian Grand Prix in his memory this coming August. My nephews, Sean and Conor, were with Killian for almost all of the three weeks he was in Marymount and they’ll be part of that trip, which is important. Killian even had tickets lined up for the Rugby World Cup next year, so we’ll have to go to France for that too.’

Nora says the sense of his life not lived is still too hard to comprehend, she said.

‘Things will never be the same again, yet doing something together, like going for a swim in Broadstrand, or walking the Seven Heads, even the Christmas swim or this fundraiser, helps us to keep going. Make him proud.

‘Shortly before he passed away, Killian said to Eimear: “Don’t count the days, make the days count”. ‘That’s why we want people to join us in the fundraiser, making the days count and making a difference.’

The €20 entry fee and all other funds raised will go directly to Marymount. Everyone taking part is asked to wear orange and share pictures on social media on the day.