Clockwise from above: the rugged Beara peninsula is whereTom Richards intends to shoot the film, in memory of his best friend Liam O’Neill. He is optimistic that filming could start in the summer of 2023.

A US writer living on the Beara peninsula is in talks with a production company interested in turning his book into a film. And spurring him on to get the project over the line is the memory of his friend who lost his life to Covid.

A BEARA-based writer is determined to see his novel adapted for the big screen in honour of his best friend who died from Covid-19.

Chicago-born Tom Richards has lived in Ireland since 1982, and in Eyeries for the past 10 years. He’s the author of several books, the latest of which is Dolphin Song which recently launched.

He describes it as an ‘Irish romantic fantasy novel, which offers a ray of hope to lighten the dark times we face.’

Dolphin Song was developed with the help of Irish-American filmmaker, director, writer Liam O’Neill, who died last year from Covid. 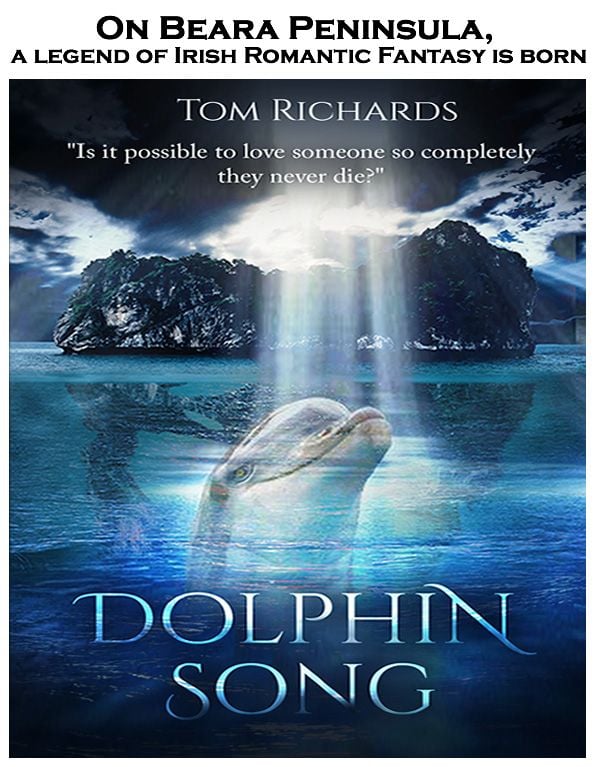 Liam’s credits include Frankie and Johnnie, The Barber Shop, Northern Lights, Lost and Found, and most recently Danny Boy, and Kathleen.

‘He was my best friend and was right there for me throughout every step of this creative journey which started out 23 years ago,’ said Tom.

‘The original plan was for just a screen play, but around three years ago Liam asked me to also write a novel as he felt it would help with the financing of the project.’

The plan was that the novel and feature film would come out at about the same time, but Liam’s tragic death obviously changed everything.

While some of the story takes place in Boston, most of the novel is set all over Beara – from Castletownbere to Glengarriff; Allihies to Kenmare; and the wild Atlantic beyond.

‘In Dolphin Song, I’ve done my best to paint the local area in all its splendour,’ said Tom.

The story centres around Bostonian Dawn McCarthy who suffers a double tragedy when her husband is killed in an accident at sea. Having been traumatised by witnessing his father’s death, Dawn’s son Jason develops mutism and retreats into a silent world of his own. It is only when they meet an enigmatic dolphin that the boy takes his first steps toward healing and Dawn discovers that the mammal is not what she had at first supposed.

‘The story gives us solace because its premise suggests that those we have loved and lost aren’t gone, even though they have died. Instead, they’re right here, as alive, as loving and as present as they have always been. As one reader said to me because of the losses many have experienced due to Covid, it is a story for our times,’ said Tom.

The 65-year-old is now working hard to raise finance to get the film project off the ground.

‘Prior to his death, Liam was just starting to pitch to European production companies for finance.

‘He was hoping to make the film right here in Beara, but of course his passing has changed the status of the project.

‘My hope is, if I can get enough traction with the novel, we’ll be able to attract a film producer and eventually bring the film to fruition here in Beara. It is what Liam wished, and I hope so much I can help to achieve that,’ he said.

Interestingly, Tom and Liam were born six months apart and lived just two miles away from each other in the US, but only met in Ireland.

‘He was my “go to” guy. His death has left a hole in my heart. This is about making a two-decades-long dream come true for him and I am humbled by the outpouring of support that I’m receiving from friends and readers.’

Tom runs his own marketing company and finds living on the Beara peninsula incredibly inspiring as a writer.

He first came to Ireland after finishing grad school in 1980, and three days later met his future wife.

They returned to the States for a while, but moved back to Ireland in 1982 and lived in Navan.

They separated 10 years ago, and when Tom came to a writers’ retreat in Eyeries he instantly fell in love with the place.

‘It felt like home and I moved here, it’s where I now call home, and my three children and five grandchildren are still in Navan.’

He wrote his first book in 1994 (The Lost Scrolls of Newgrange published by Poolbeg) and in total has six to his credit including Hot Foot which got a major boost when the late Gay Byrne mentioned it on the Late Late Toy Show.

Others include A Survivor’s Guide to Living in Ireland (which he has updated annually since it was published in 2005).

Tom has already had a serious approach from a German film production company, which is extremely interested in the Dolphin Song project, and he’s optimistic that filming could start locally in the summer of 2023.

In the meantime, he said, he feels Liam standing on his shoulder, grinning and saying: ‘Tom, keep on marching.’

• Dolphin Song is the number one new release bestseller on Amazon in the United States and is performing well across the world.