Lydia with Fergus, who she feels is still always present. The siblings were very close despite their four-year age gap.

Coming up to the sixth anniversary of Schull singer/song writer Fergus O’Farrell of Interference, his sister Lydia reflects on the death of her big brother and how she came to terms with his loss in her compelling new book

LYDIA Little had never experienced real grief before the death of her brother.

He was Fergus O’Farrell, singer/songwriter of band Interference, who is widely regarded as one of the great Irish music talents.

Having been diagnosed with muscular dystrophy at the age of eight, consultants told his parents he’d be in a wheelchair by 12, and probably wouldn’t live past 18.

He typically defied them all and passed away in 2016 at the age of 48, and Lydia said while they had ‘expected him to die for years, it was still a shock when it did happen.’

‘He died on February 2nd, 2016, so nearly six years ago. It was actually within a week of his friend, musician Colin Vearncombe who also lived in Schull, and the entire village was in shock.’

Lydia has now written a memoir that looks back on that period of time.

Called ‘Overload: A Brother, A Wake, and A Secret,’ it’s a snapshot into the week of Fergus’ death, his wake and his burial, and it’s due to be published later this year.

‘There were four years between Fergus and me; and just 14 months between him and my older sister Sharon. I was 10 when they’d have been 14 and 15, but we had a very unique, close relationship. Everyone’s grief is very different. 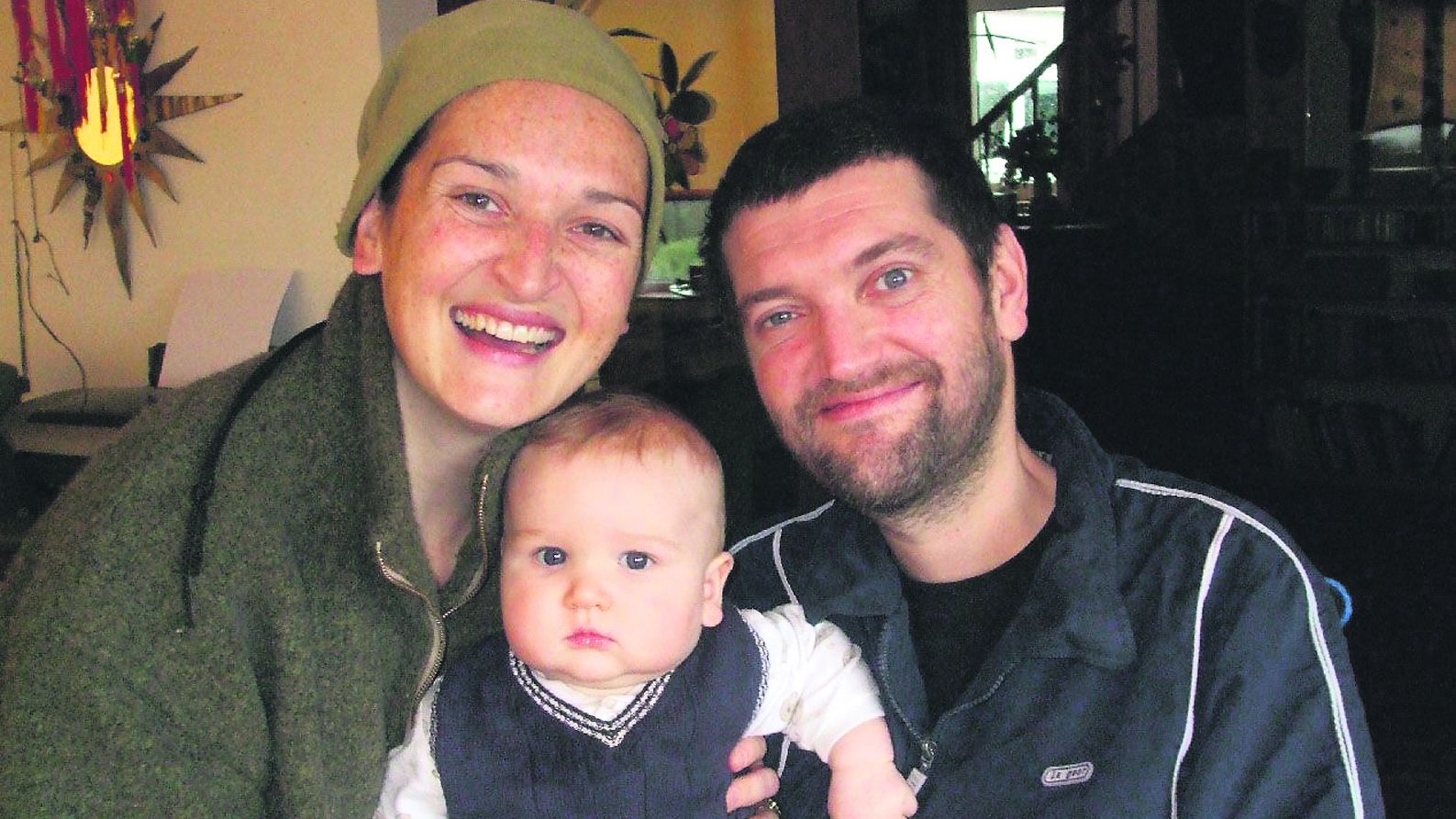 Lydia and her son Jackson with Fergus.

‘I only know my own and it was for my big brother.’

When Fergus died, Lydia was in the middle of editing her second teen fiction book, K Girls Plus One.

‘But I lost all my mojo for that, I lost all the joy for the sort of “jolly hockey sticks” lighthearted stuff. But I still had that instinct to write and a real need to pour it out somewhere.’

The mum-of-three had developed a love of journaling from her years in boarding school at Kylemore Abbey, and that’s what she turned to in the depths of her grief.

‘I noticed that when putting pen to paper, writing at a snail’s pace, I became far more mindful and as a result I found a completely different voice,’ she said.

‘Journaling gave me great peace and I often found myself sitting on the beach in Barleycove with the journal and just asking myself what was I feeling,’ she said.

The book, she says, shows that even in grief there is joy to be found, if you just look at the world from a different angle.

‘Grief is about loss, but it is also about unexpressed love and the joy that can be found in grief. In a way we have a choice of deciding to be immobilised by it, or live positively with it. Every single human being will go through the stages of grief at some point in their lives, and this is my version,’ she said. 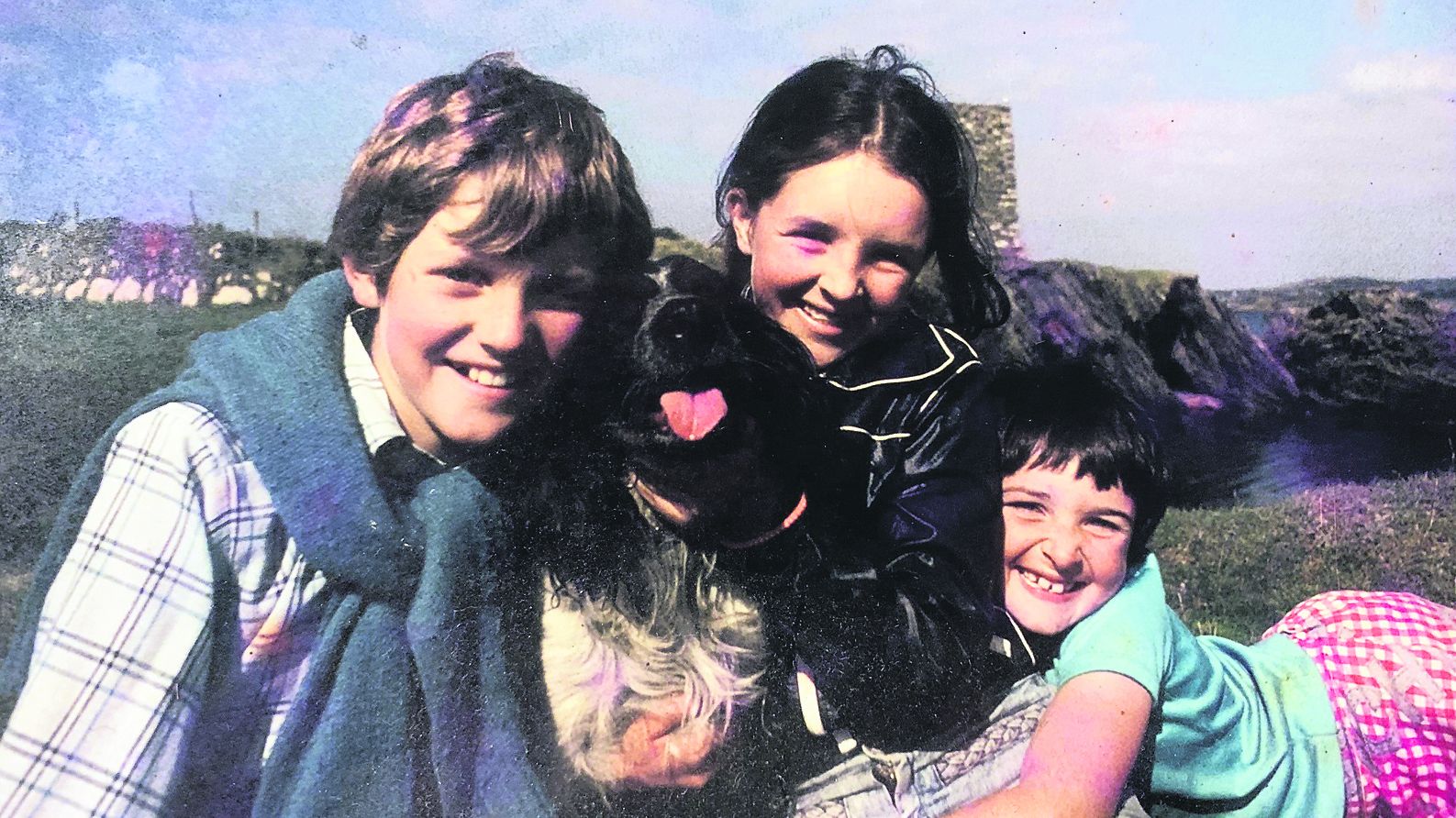 Fergus, Sharon and Lydia with their dog Shandy in 1979.

It will be Fergus’ sixth anniversary next week, and Lydia says that while her brother is always present, it’s now less about pining for him and more about sharing things with him.

‘Someone said to me that you’ll start to find the gaps between breaths get longer and that’s true,’ she said.

Overload also gives a unique cultural insight into the phenomenon of the Irish wake, funeral and burial. ‘The Irish do death so well.  In 2016, pre Covid, we still got to “celebrate” death as the Irish do best.  Covid took that away from us.

‘Overload is a real fly-on-the-wall look at how the Irish celebrate death. Fergus’ wake in 2016 was absolutely phenomenal with so many musicians attending as well as support from the local community.

‘It was about celebrating his life, albeit one that was cut short, and there were elements of joy to it,’ she said.

Fergus was married to a Chinese woman, Li, and Lydia explains Li had to experience death through our culture’s take on it and not the Chinese way.

‘There were moments where we simply forgot how crazy it all must have seemed to Li, with our Irish celebrating and singing and dancing.’

As for the secret? Lydia explains that when someone dies, everyone has questions: What happened? How did they die? Was someone with them when it happened?

In Fergus’ case, Lydia found there were questions that remained unanswered.  She also discovered some answers that couldn’t be shared.

‘When you know something you can’t un-know it.  Writing Overload allowed me to get things out of my head and on to paper.’

It was made over 10 years by his friend Michael McCormack and the story will reach even more audiences still when it’s screened in New York in March at the annual film festival Craic Fest.

Published by West Cork’s Sweeney and O’Donovan, Overload is due to hit shelves in April, and in more good news for Lydia, she’s hopeful of her teen series K-Girls hitting TV screens in the near future.

Both books were optioned for development into a TV series in 2020, and in a special moment she signed the contract on top of a piano belonging to Fergus.

If that isn’t ‘overload’ of a good kind, we don’t know what is.