What’s the future for the church? Only God knows, he said. (Photo: Andy Gibson)

Fr Pat McCarthy is retiring soon from Ardfield/Rathbarry, which will be without a parish priest. He reflects with fondness on his five decades in the priesthood, but admits he feels worried for the future of the church. 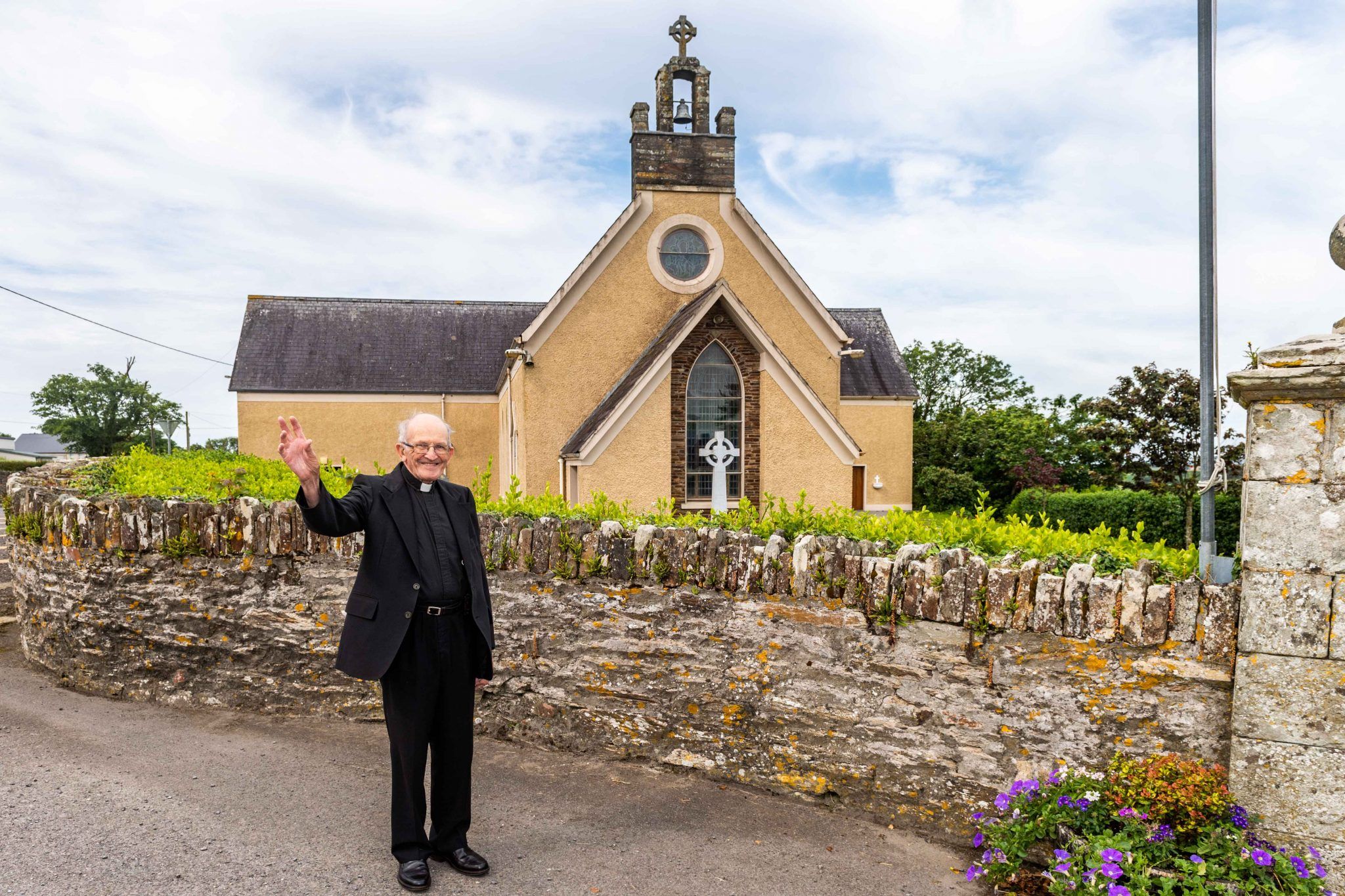 Parish priest Fr Pat McCarthy at St James’ Church, Ardfield. He spent 19 years in the parish, ‘a wonderful part of the world’ and where he made great friends and he will be sad to leave next month – even if it’s only to nearby Clonakilty. (Photo: Andy Gibson)

After spending over 50 years in the priesthood, Fr Pat McCarthy, Parish Priest of Ardfield/Rathbarry, is retiring in the coming weeks. He looks back on his time with great fondness but does think the church will face a lot of challenges in the future.

Fr McCarthy took an indirect route to his vocation. After completing his Leaving Certificate in 1959, he studied chemistry in UCC.

‘All I knew is I wanted to stay in Ireland,’ he said.

After finishing his masters in 1964, he went to Surrey in the UK as the opportunities were better.

But he soon realised chemistry wasn’t for him and he began wondering what he could do for the rest of his life.

‘The idea of the priesthood appealed to me.’

Fr McCarthy spent five years in a seminary in Dublin and was ordained in June 1970. He was drawn to parish work and would have liked to move back to Cork, but due to the number of priests in the diocese, a move further afield was imminent.

‘The cultural change was colossal. Savannah is a lovely city but very hot in the summer. I found it unbearable. It was not a good choice for me, culture wise or climate wise.’

He spent the first two years teaching chemistry and religion in a military school.

‘They were two difficult years,’ he says, describing how the children came in two days a week in their soldiers’ uniform with rifles and marched around the square.

In the summer of 1972, he moved to parish work and found his stride. He spent several years moving around Savannah until settling in Waycross for 10 years. In 1989, he asked for a transfer to Ireland and came back home permanently.

‘Coming back, I found it difficult. The church in America, they had a great sense of owning the church and belonging to the church. They were very open to change.

‘The one saying that summed it up for me, to live is to change and to be perfect is to have changed often.

‘The Irish Church did not believe in change. It was scared of change, and I thought change was vitally important for the Church. You’ll never improve if you don’t change.’

‘I was much happier in a rural parish. My grandparents were from Castletownbere, they were all rural farmers and maybe that’s in my genes.’ 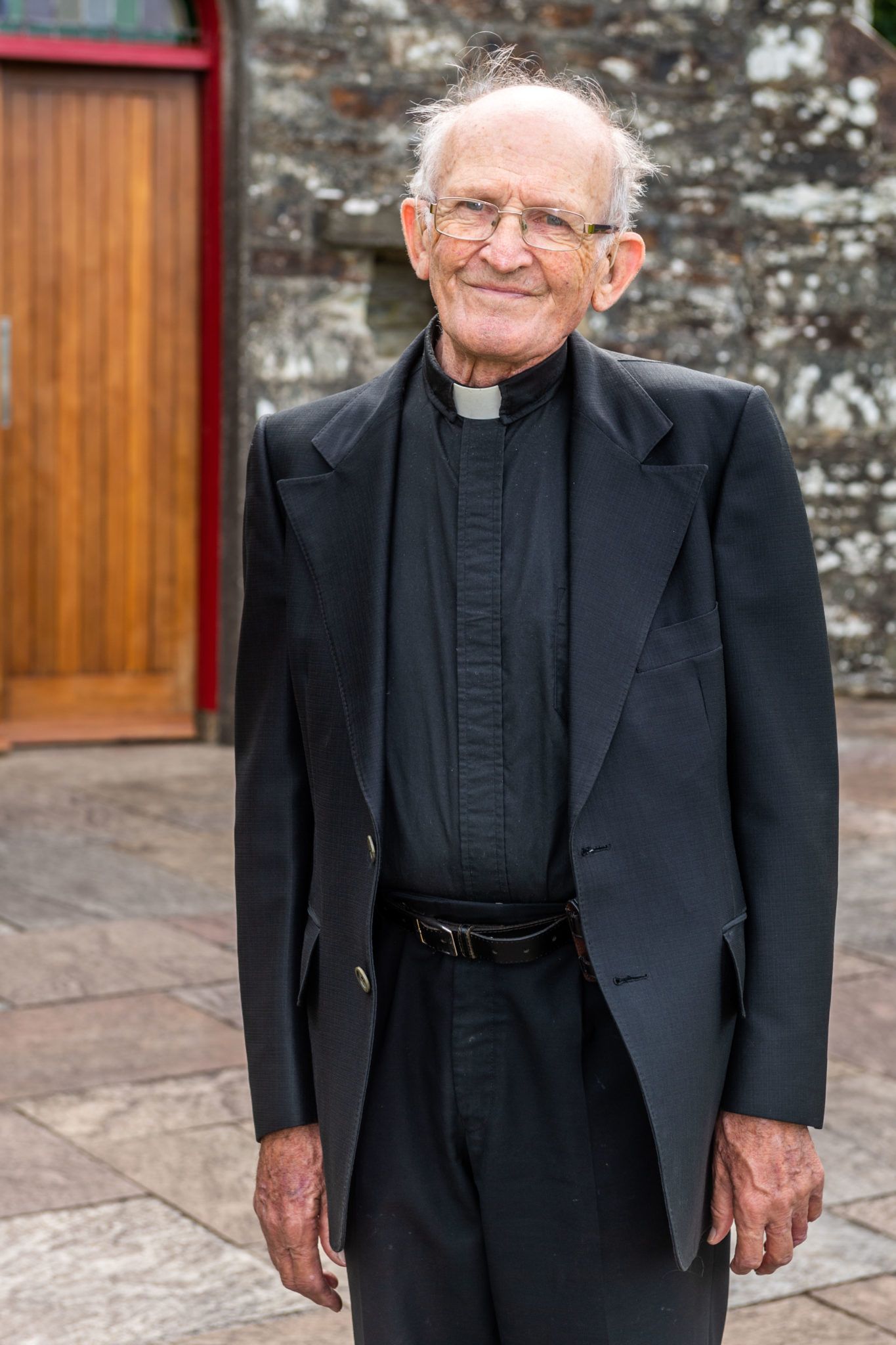 Fr Pat at St Michael’s Church, Rathbarry. His family were from Castletownbere and he preferred rural parishes. (Photo: Andy Gibson)

From his 19 years in Ardfield/Rathbarry, he has many great memories.

‘You always remember weddings and baptisms, they stick in your mind. Fr Anthony’s ordination was certainly a big event in the parish.

Now that he is retiring, no resident parish priest will take over. Instead, the priests from the other parishes in the deanery will be looking after Mass.

Fr McCarthy, who is aged 79,  does worry for the future of the Church. With 12 priests in the diocese reaching retirement age in the next few years, there are certainly challenges to be faced.

‘To me, there are two options. One is to bring in priests from abroad and the other is to ordain married men. I would favour that option. To me it makes a lot of sense. Of course, the next step would be the ordination of women.

‘You will always get people who are opposed to change. It should be done now out of principle, not done down the road out of necessity or out of fear. Do it because it’s the right thing to do.

‘It’s amazing to think, when I joined back in 1965, I’d have liked to have joined the Irish Church, but they wouldn’t have me because they had plenty of priests. Now we’re running out of priests so rapidly that they’re closing churches.’

What the future holds, Fr McCarthy says that only God alone knows.

He looks back on his time in the priesthood with sheer fondness.

‘Some people ask was it a big sacrifice to make. I must say I made it for selfish reasons because I enjoyed it. I was happy in it. I found it very fulfilling and I found no major sacrifice in it.’

‘I will be very sad. I spent 19 years here, made wonderful friends, it’s a wonderful part of the world,’ he concludes.

Fr McCarthy will be finishing up his duties in Ardfield/Rathbarry by early September when he will move to Clonakilty, allowing him to stay close to the community he has become an integral part of.