IMAGINE having fire hoses at the ready and barbed wire surrounding your place of work in case you were attacked by pirates?

It’s something that Glandore’s Stephanie Keohane takes in her stride. The 35-year-old has crossed some of the world’s most dangerous oceans during her career in the merchant navy and has loved every minute of it.

The nautical science graduate of CIT is one of only nine women in this country to have her ‘masters certificate of competency’ which means she can command the world’s largest ships.

Her original plan was to be a science teacher – so she could have summers off to pursue her passion for sailing.

‘But a career guidance teacher suggested I look into the merchant navy. It wasn’t something I thought of as you wouldn’t see too many big ships in Glandore!’ said Stephanie who embarked on the three year degree in 2003.

It was a baptism of fire as in her second year, aged 20, the cadet-in-training was required to spend 12 months at sea (broken into three/four month stints). ‘I remember my dad bringing me to the ship I was assigned in Aughinish and I just thought “what have I signed up for?”’ 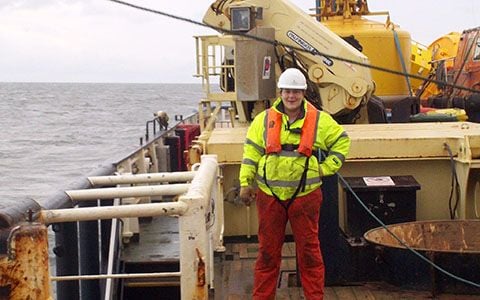 All in a day's work!

Her first trip with Arklow Shipping was to Iceland and it was a bit of an eye-opener, she remembers.

‘There were about 16 people on board. We all had our own cabin with ensuite; but there was no TV in our cabins or wi-fi – although we didn’t have mobile cover in Glandore either so it wasn’t that different!’

On graduating from CIT she earned her ‘Officer of the Watch,’ which is essentially a licence to drive ships. Her first position after qualifying was with the Carisbrooke Shipping Company and she later joined the Danish shipping company Maersk with whom she sailed all over the world delivering cargo to its destinations.

‘For my first job with Maersk they flew me to LA and four months later I signed off in Hong Kong,’ she remembers. Her longest crossing with them would have been two and a half weeks across the Pacific but her work usually involved shorter voyages which would see her sail a ship to a destination in a few days.

On the container vessels it was usually a 12 weeks on, eight weeks off rotation.

A typical ‘day’s work’ would have seen Stephanie on duty from either 8pm to midnight or 8am to noon on the Bridge, essentially making sure the ship stayed safely on course and avoiding any hazards to navigation.

Consider a container ship is typically 250m-400m long and 100,000t in weight, apart from its cargo, to appreciate that task.

There’s also planned maintenance to do outside of these hours and as third officer you are in charge of life saving appliances or firefighting equipment. For a second officer you are in charge of the upkeep of charts and navigational/bridge equipment. ‘What you’re doing is watching for targets on the radar; looking out for lights of fishing vessels and other traffic and ideally aiming for a minimum one mile zone around you at all times,’ she said, which isn’t always easy in the likes of the very busy Singapore Straits.

She recalls one dramatic occasion in Yantian, near Hong Kong when a container ship coming in the opposite direction started passing down their port side, then changed direction to the starboard side, only to change again and come straight for them. ‘Needless to say I had to dramatically change course,’ she said. Fortunately, she never encountered pirates on any of her crossings but they regularly heard of smaller ships being boarded especially in the likes of North Africa’s Gulf of Aden. ‘If a pirate boarded our ships I’d have shaken his hand as we’re so high out of the water and proceeding quickly at 20 knots – we’re six to seven metres from the sea level!’

But they were well aware of the potential danger and at night time had all their windows blacked out, the barbed wire and fire hoses in place, had night vision goggles for look-out and had regular drills in case of an emergency.‘But day to day it just felt like any other job,’ she insists.

In total Stephanie spent seven years with Maersk during which time she encountered some sexist behaviour and language, depending on crews and their culture, but it’s something she tends to brush off. ‘You just learn to develop a thick-skin and move on,’ she said.

In general there’s camaraderie among crews, and when off duty there’s a chance to mingle in common areas, watch TV and relax. Some ships have an alcohol free policy; her current ship has a bar, although there’s strict guidelines about consumption.

During her time with Maersk she advanced her career further earned her Chief Officer certificate of competency from the National Maritime College of Ireland in Ringaskiddy and also completed her bachelors degree in Nautical Science.

She’s currently working with Trinity House, UK. Trinity House is a maritime charity which is dedicated to safe guarding shipping and which has Princess Anne as its master.

Stephanie is on board the THV Galatea, as a 2nd officer/Chief Officer and their work centres around inspecting buoys, lights and light vessels on the UK coast and assisting with the upkeep of lighthouses.

‘We have a crane that lifts the buoys on to deck, where they are cleaned and inspected before they are returned. We also have helicopters landing on board to replenish light houses on the coast of the UK,’ she explained. The boat goes to anchor most nights and she works three weeks on and three weeks off rotation. Home now is Merseyside where she lives with fiancé Mike who also works in the industry, as a Chief Engineer. In recent weeks, Stephanie has furthered her career by passing an oral exam, in Dublin which earned her, her Master’s Licence.

Of the seven females in her class in CIT she’s the only one still working at sea and is one of only nine females to have obtained their masters certificates in this country.

She would encourage any person to consider a career at sea. From a financial point of view it’s attractive – a starting wage for a third mate would typically be around £30-£35,000 sterling and some earnings are tax-free.

‘It’s also a good career to build up savings as there isn’t a chance to spend money – although with improved wi-fi there is now the temptation of online shopping!’

One useful attribute to have she feels is to be happy in your own company, although access to communication has improved greatly since she started out and there’s now the option of facetime to stay in touch with family and loved ones.

Having good health and eye sight and, of course, liking the sea are also important.

‘There’s also lots of autonomy and independence with my work and a chance to get on with things which I like.’

She’s travelled the world during her career, but says there’s no place like Glandore when it comes to sailing and she enjoys visits home to parents Helen and Stephen.

‘I remember when I saw my first ship I wondered “what have I signed up for” but now I couldn’t imagine doing anything else,’ said Stephanie.

This article was taken from our Careers & Courses 2019 magazine. if you would like to read or download the magazine in full you can do so by clicking here.