The wheels are coming off! Who needs a spinning bike, when you can go sea swimming with a great bag inspired by Dr Tony himself? And I’m on the case to find out more about the movie being shot in West Cork.

It’s Week 46 and to be completely on the level, I’m after running out of steam, so why I’m obsessing over a spinning bike is anyone’s guess

• I’M going to begin with an apology – which is never too promising a start. I literally have nothing to say this week. Nada. Diddly squat. Zilch. You might say that didn’t stop me for the previous 45 weeks, but this is tumbleweed territory. Lockdown rot has set in good and proper. Was there a full moon or is something in retrograde? Ugh, ugh and more ughs.

• Anyway, I had my first pandemic birthday. I share the same birth date with a motley crew including Paul Newman, Ellen DeGeneres, Jose Mourinho and Andrew Ridgeley of Wham! fame. There you go (go) now! Apparently, (according to the oracle that is Google) people born on January 26th enjoy good food and conversation, freedom and being with people. If I bought into any of that tosh, it might explain why having a diabetes-inducing Nutella cheesecake (four-year-old’s choice) with my bubble of three was just a wee bit ‘flat’ (at least until the sugar high set in).

• I didn’t even have the energy to muster up my customary drama at being a year older – although I did have a slight speed wobble and almost bought a spinning bike that cost €2,500 but I saw the light (and my bank balance) in time. At 45, I can now definitely say I feel mature enough to understand that slightly irritating ‘life isn’t a dress rehearsal’ phrase (even with very good odds, I’m more than half way through), but I don’t feel old enough yet to jack it all in and live in a beach hut in Bali in pursuit of happiness. I mean, if we really properly understood it could all be over tomorrow that’s what we should all do, right? Maybe I am having a crisis of sorts after all (also because I’m not very discerning with my social media settings, I’m being bombarded with ads for spinning bikes which makes me still really want one. Ugh). But the birthday gift of 2021 has to go to my Skibbereen nephews for my new swim bag which, in a nod to the Chief Medical Officer, says: ‘The best level Tony is Sea Level.’  Liked that a lot. 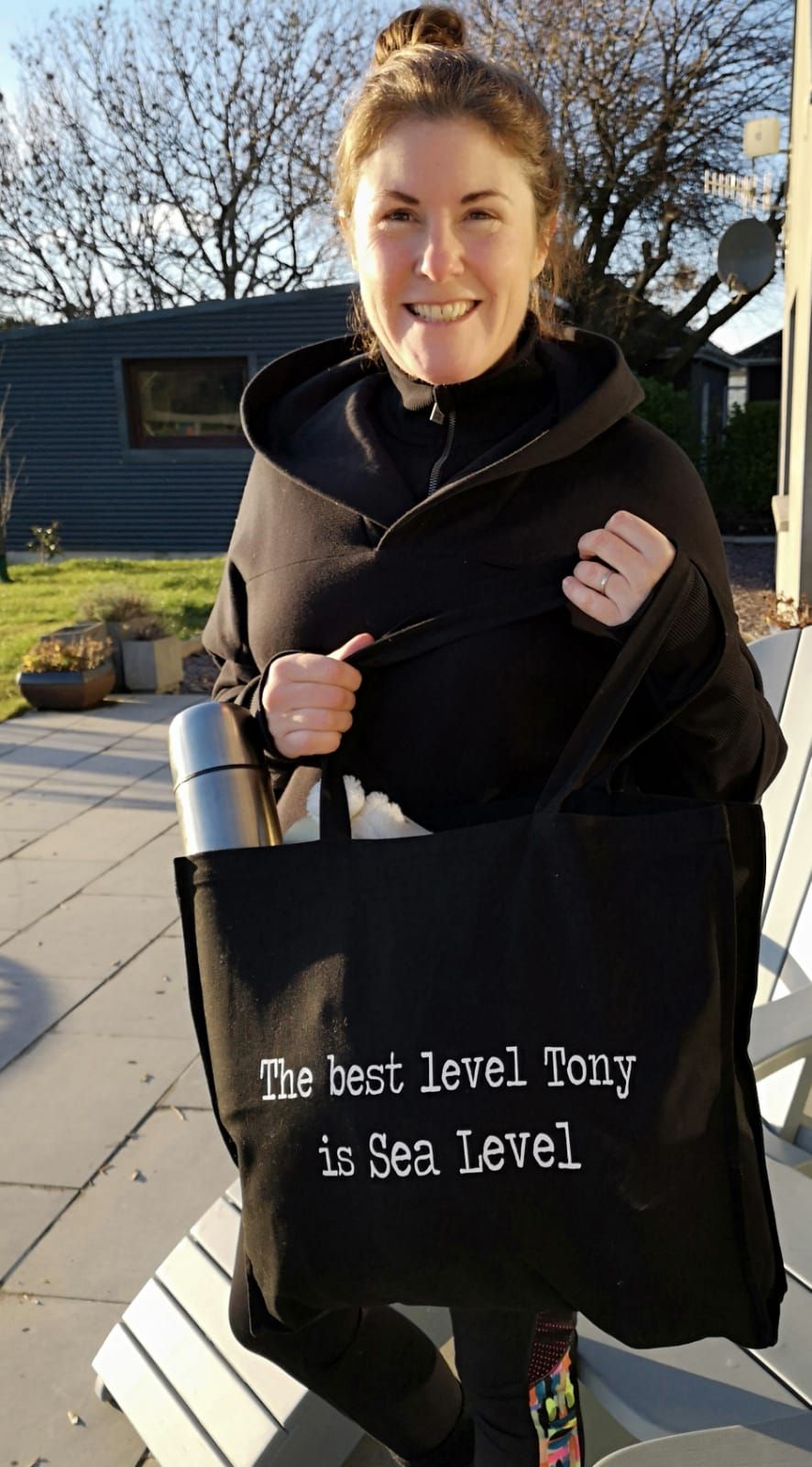 Who needs a spinning bike, when you can go sea swimming with a great bag inspired by Dr Tony himself?

• I think the problem is that I’m still trying to recalibrate my brain for what is a very different start to the year than what I imagined. I knew it wasn’t going to be weekends away and supper clubs all around, but I thought we might at least have dates for such events. I definitely didn’t predict schools being shut until possibly March, delays in vaccines and heart breaking  scenes  in the country’s hospitals. I’m being a right old Debbie Downer – I wonder would Tadhg Fleming and his family take me in for a few days to sort me out?

• I mean even the bloody snow didn’t stick around here. Worse still, the sun came out which meant we had to go for a walk. Again. Even Darcy the dog is hiding when she sees the lead coming out at this stage. We normally go to a local beach where I’m finding a strange release in digging holes (taking a break from the sandcastles) like a totally crazy person. If you see me, just keep on going to save us both the embarrassment.

• It was no secret that I nibbled (gobbled?) my way through the last lockdown, and I’m clicking my way through this one. I’ve actually lost track of how many black hoodies are making their way to me from various parts of the globe (and yes, one was held hostage until I coughed up a hefty delivery charge. Ugh).  Every time I think I’ve found ‘the one’, only to discover another ‘one’ during my late night scrolling. It’s getting very messy, but it’s keeping me busy.

• And I know it’s old news now but what how much the RTÉ crew are earning? I was feeling sympathetic for ‘poor’ old Tubs having to present the Late Late without a live audience since last March. Yeah, let’s just say I’m feeling much less so now. In fact most of my sympathy is reserved for Miriam and Claire. They seem to be on duty every night of the week and are well down the ranking. I don’t even know why I’m surprised. Another ‘ugh’?

• Oh and what about that little piece in last week’s Star about a movie being shot in West Cork next summer and with some big star already signed up? Loads of people are asking me to find out more so I’m on it! (not in it, not yet anyway unless there’s a role for the generally demented and deranged – in which case I’m available).