The late Brendan O'Mahony who lost his life to Covid-19 in Clonakilty Hospital, where his daughter Ann also works.

A carer in Clonakilty Community Hospital shares her unique and tragic experience of losing her dad to Covid-19, while working on the frontline herself in the very same facility

A WEST Cork carer was in the tragic situation of working on the frontline in a hospital during the Covid-19 pandemic, where her elderly father sadly lost his life to the virus.

Ann O’Sullivan, Leap has spoken out to give an insight into her experience of the global pandemic, which is unique to just a few.

Ann has worked as a carer in Clonakilty Community Hospital for nearly five years and since October of last year, her beloved father Brendan O'Mahony, was a patient there after suffering a massive stroke.

The mother of four was in the fortunate situation of being able to see her 83-year-old dad every other day, however all that changed  in April last.

‘All visits ceased immediately after dad tested positive for the virus and I too had to follow all protocols put in place for the safety of all,’ she said.

‘This meant I had to self-isolate for two weeks in a relative’s empty house, which was difficult under the circumstances. On my second night I found it difficult to breathe in the middle of the night.

'The following day I was swabbed and this was not a nice experience, but thankfully the next day the results came back negative which was a relief,’ said Ann, who described her friends as being wonderful to her at this time.

Initially Brendan battled the infection, but the sad news of his passing came in a phone call to Ann, on the 28th of April at 6am.

Ann said she’ll be forever grateful to the night sister at the hospital who allowed her 15 minutes with her dad that morning.

‘It really was such a bizarre experience, really awful. And having to do it in full PPE was even worse but I’ll be forever grateful for those precious moments with him,’ she said.

As she held his hand, she told her dad that he was going to a better place and that his mom and dad were waiting for him with his baby boy.  ‘He was very well cared for in the hospital but he was a man for the outdoors. When we’d visit, I remember he’d ask us with a wink if we had any ‘dropeen’ or curry chips!’ she remembered.

Brendan’s funeral, even though it was restricted to just 10 people, was also very special, she said.

The family brought him to Ballinlough lake where he loved to fish, and neighbours showed their support by lining the road and gathering at the church, which was a gesture they greatly appreciated.

‘There was a lovely sense of peace in the church, and with the small numbers there were no distractions. His two grand daughters sang at the mass, and even though I hadn’t planned it I sang the entrance hymn which was ‘I will never forget you.’ As I sang the hymn a butterfly appeared and this gave me an affirmation that he was in a better place. My brother also played the accordion at the graveside as he always liked the sound of this instrument,’ she said.

Ann said that outside of mourning the loss of her dad, the past few months had been very challenging for her and her colleagues, but she stressed the wonderful work being done in the hospital.

‘We were all working in full PPE gear for a few weeks which made everything very surreal and almost eerie. Things really took their toll on everyone both mentally and physically but it was marvellous the way everyone pulled together. I deeply appreciate the staff in An Ghraig who looked after my dad especially in his last hours, with thanks to Dr Brian Carey who knew my dad from Bantry Hospital.’

The hospital is now fortunately Covid free, but naturally everyone is remaining vigilant and employing all the necessary protocols.

Given the ongoing risks involved in her work, Ann is faced with another challenge – that of being unable to visit her elderly mum Mary for fear of infection. 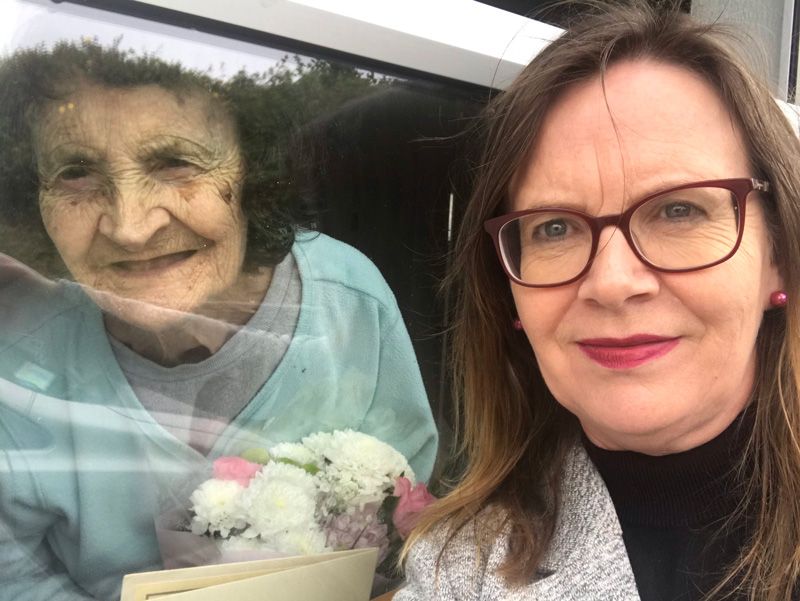 Ann is counting down the days until she can give her mum Mary a hug.

She lives with and is being cared for by a family member and Ann said that in some ways she’s also mourning that loss.

‘I can’t go in to see her, just in case, so I have to make do with bringing flowers, chocolates or baking to the window to her, and of course I can’t hug her. Dad was isolated alone in his hospital bed and we couldn’t see him, and mum is in a family unit, but we can’t see her either.

‘I don’t think people have any idea what it’s like for workers in my situation and what they’re going through. I love my job, but I feel that I’m in the wrong job at this time.

‘Never in a million years could I have predicted what we’ve been through. I’m literally counting down to the day I can go and give my mum a hug.’ Ann added that she greatly appreciates the kindness shown to the staff from the community with gestures like  food, cakes, vouchers and fundraising efforts as well as the leadership shown by Deputy Jim Daly who was hands on, and continues to support the hospital at this time. ‘This has been a very difficult time for staff, residents and families, but together we rise,’ said Ann.