Volunteers throughout West Cork are working tirelessly to help keep our coastline clear of litter and now they’re urging others to get involved. It couldn’t be easier either thanks to a new initiative – all you need is two minutes.

Clean Coasts are calling on people around West Cork to pledge to do a #2minutebeachclean over the summer – and beyond.

The charity programme, run through An Taisce, engages communities in the protection of Ireland’s beaches, seas and marine life.

They run several campaigns in Ireland including ‘Think Before You Flush,’ ‘Beat the Microbead,’ and now the  #2minutebeachclean which has really engaged the public.

There are currently over 1,400 registered Clean Coasts groups and volunteers, including many in West Cork.

Among them is Mark McCarthy who has been involved with Clean Coasts since 2017.

He lives in Schull with his wife and two kids and says whenever possible you’ll find him on the water or at the shoreline.

‘I grew up here and after many years of travel I wanted to settle down and raise a family.

‘We love the outdoors especially the sea and my job as a powerboat instructor has me spending a lot of time on the water. I also volunteer with the Irish Coast Guard in Schull which I’m very proud of.’

He started volunteering with Clean Coasts after seeing some of their initiatives shared online, and he goes out to sweep local beaches at least once a week in the winter and in summer he always has a blue bag handy wherever he goes.

His main spots are Barleycove, Balyrisode, Schull, and some of the local islands in Roaringwater Bay.

‘I mostly target marine plastic and stuff that washes up on the shore. Sadly a lot of what  I find comes from the fishing industry,’ he said.

‘Probably the craziest thing I found was a test torpedo from a submarine. I called a friend in the navy and he sent a few lads down to collect it. I also find lobster tags from North America quite a lot.’

Despite the volume of rubbish he collects, he doesn’t feel disheartened or discouraged by people’s behaviour.

‘Quite the opposite, people’s good behaviour encourages me.

‘I’m inspired all the time by others who clean the coast themselves.’

‘It’s a fantastic way to show that even the smallest handfuls can make a difference. This is a way to use your phone and  social media to do some good  and is really powerful,’ said Mark.

Sinead McCoy, Clean Coasts added: ‘By taking part, not only can you make an immediate positive impact for the marine environment and wildlife, but it’s also a chance to spend time outdoors by the sea, exercise and even practice mindfulness.’

Everyone who signs up will receive a reusable individual beach clean kit containing a tote bag and gloves from cleancoasts.org. 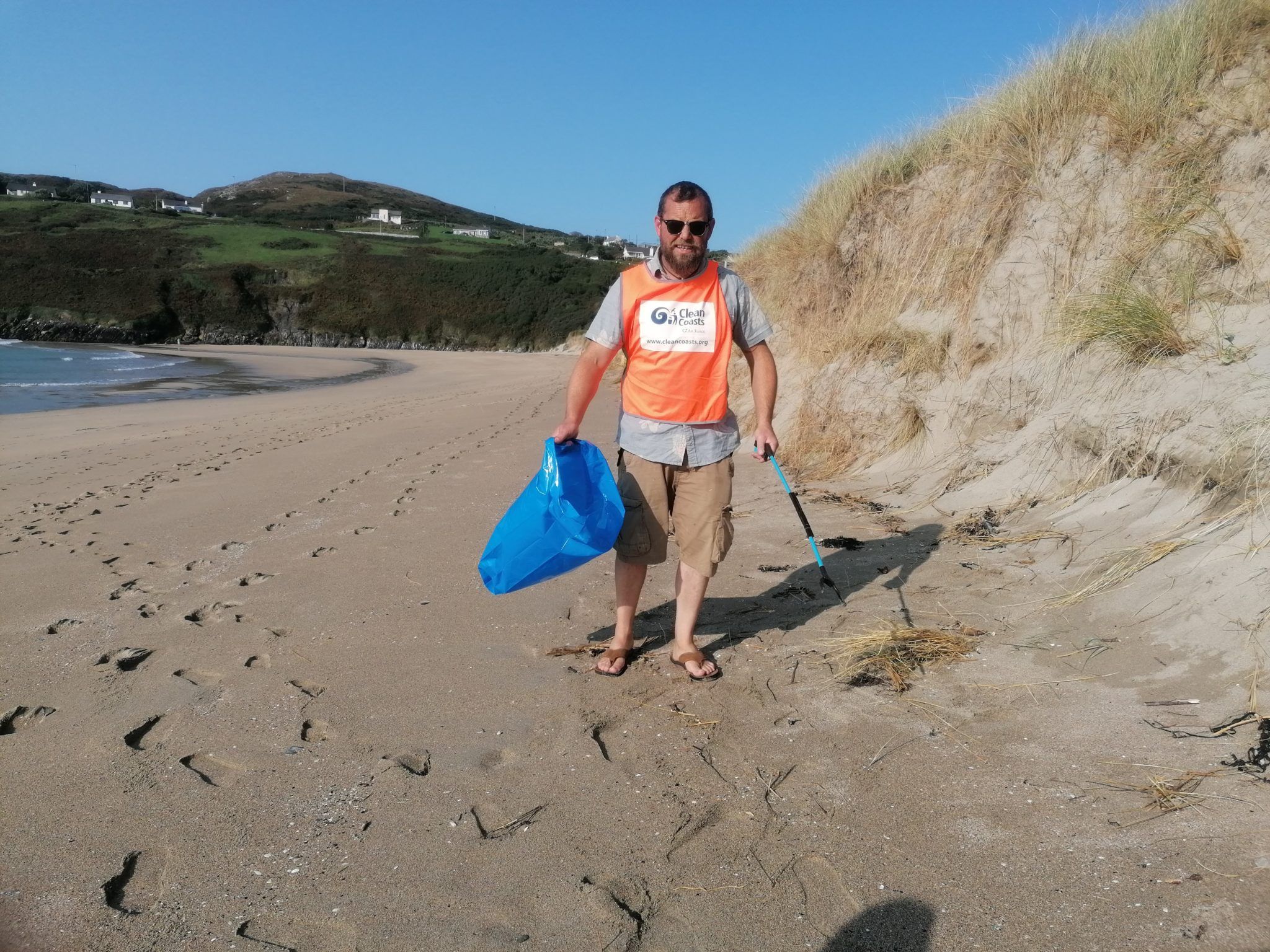 Mark, who volunteers with the Irish Coast Guard in Schull, says the initiative is a powerful way to use social media for something positive.

‘I went to the website and liked what I saw. I am very interested in nature conservation and sustainability and originally wanted to work in that field, my first job after graduating was as Country Park Warden on The Queen’s Sandringham Estate.

‘I wanted to get involved locally and Clean Coasts presented a great opportunity,’ said Danny, who with his wife Marian, relocated from the UK to their house on Toe Head in March 2020.

‘We bought our house, a traditional West Cork farmhouse, in 2010 as a renovation project and have really enjoyed working on it. Marian’s mother was from Dooneen, a mile from us, so we have plenty of great family support around,’ explained Danny.

‘I walk my dogs every morning to our closest beach, Trá na Dough, and was very aware of the volume of litter there. I checked with Clean Coasts and the beach had not yet been adopted. Ray O’Foghlu (Coastal Programmes Officer at An Taisce) was very helpful in helping me create the Trá na Dough Clean Coasts Group and supplying a start-up kit, even though there was just the one member!’

Hannah Frost and Charlie Lee, who Danny had got chatting to at the beach, joined him for their first clean last November when they collected six bags.

‘Both Ray O’Foghlu and Sandra Flynn (Skibbereen Tidy Towns) publicised our first clean up on their social media and we have subsequently grown to a multi-national group of 11 volunteers.

‘We did another clean in December and adopted a second beach, Trá na Gach (the beach by the Coastguard Station).

‘Then lockdown meant we couldn’t organise any events.  However, myself and a Toe Head neighbour, Tom Carroll, did a couple of informal cleans within our 5km limit.’

The group plans to do a formal clean of both beaches later this month. Typically they collect between three and seven bags of mainly plastic containers/bags and fishing net/line fragments.

Like Mark though, he is not discouraged and he feels the vast majority of people seem very aware of the need to take litter home with them from the beach.

‘The minority that do litter on the beach or from boats will, hopefully, become more environmentally conscious as the issues continue to raised in the media and by seeing groups of volunteers such as ourselves at work.

‘The more people that get involved in the appeal the better for our wildlife, our enjoyment of our wonderful beaches and the preservation of both for future generations,’ Danny concluded. 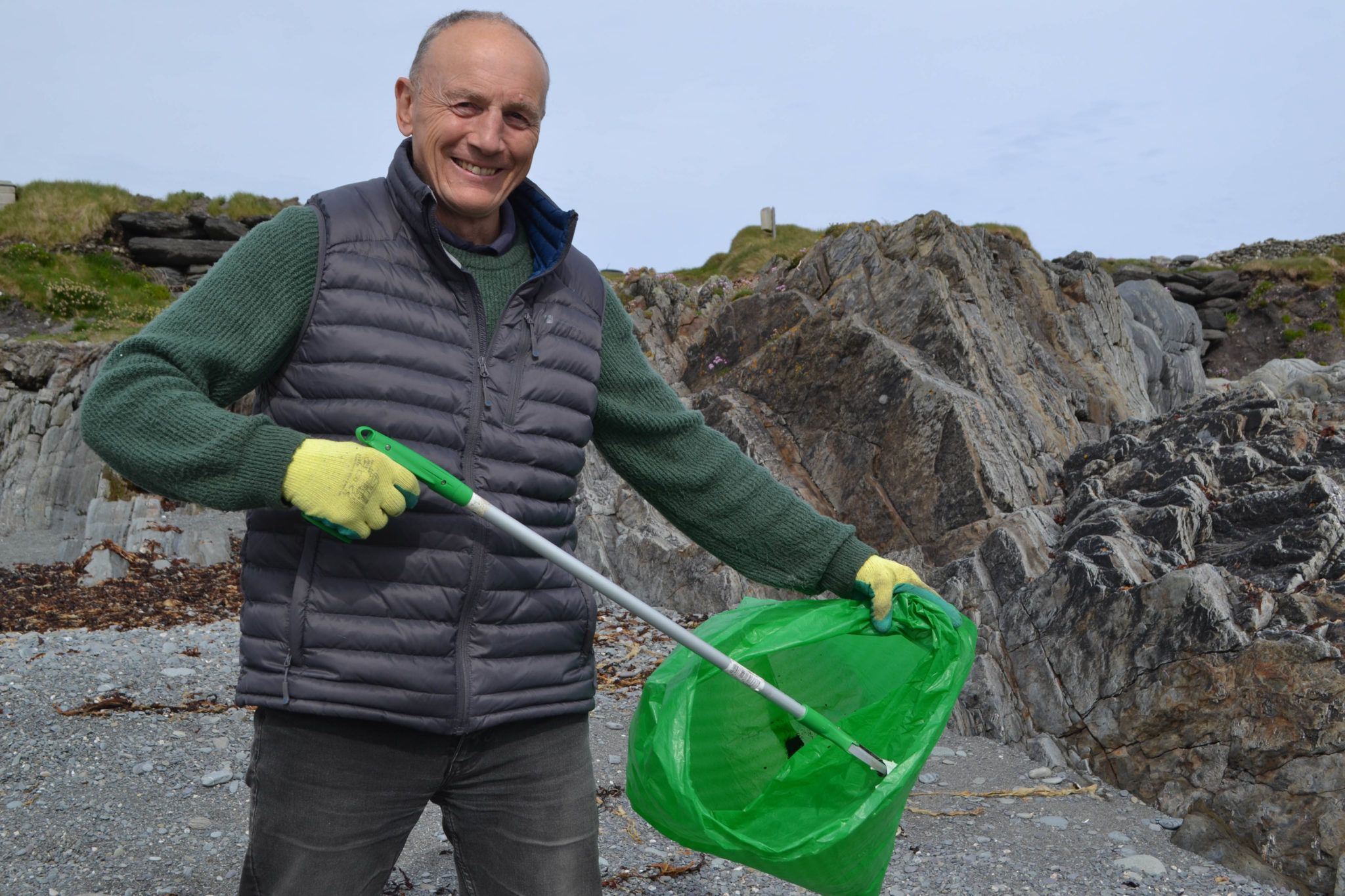 ‘It’s about spreading the responsibility’

Catherine Turner, from Castletownbere knows the cost of marine litter better than most.

Her husband Damien is a fisherman, whose boat’s propeller was recently damaged by a net left at sea.

‘He had to be to towed ashore by a tug and he lost a day’s fishing as a result. It was the second local boat in 48 hours this happened to – another propeller was damaged by a rope,’ said Catherine.

Since Lockdown hit, like so many others, Catherine has spent more time walking and with friend Sandra O’Shea, they each started to fill a bag of rubbish on their routes.

That developed into more organised clean-ups with others at Tom O’Brien’s Beach, Tralehan Strand, a strand in Dunboy Woods, Pulleen Pier.

‘Litter warden Teddy Browne supplied us with bags, litter pickers and gloves and they were very successful. At Tom O’Brien’s beach we filled one large van full of rubbish, with things like fish boxes, oil drums and rope,’ said Catherine.

That was back in February, and it’s something Catherine has kept on top of since.

‘It was horrifying to see how much rubbish was there. As a fishing port we do have that extra level of plastic and ropes here although all the local boats are really fantastic in how they dispose of their litter,’ she emphasised.

Catherine is fully behind the #2minutebeachclean and is urging people to get involved.

‘If we all look after our own road or area it really helps. I have put a crate for litter by my house which is near Tralehan and people are using it.

‘It’s my contribution and it’s about spreading the responsibility. If everyone does a little bit it will help a lot.’ 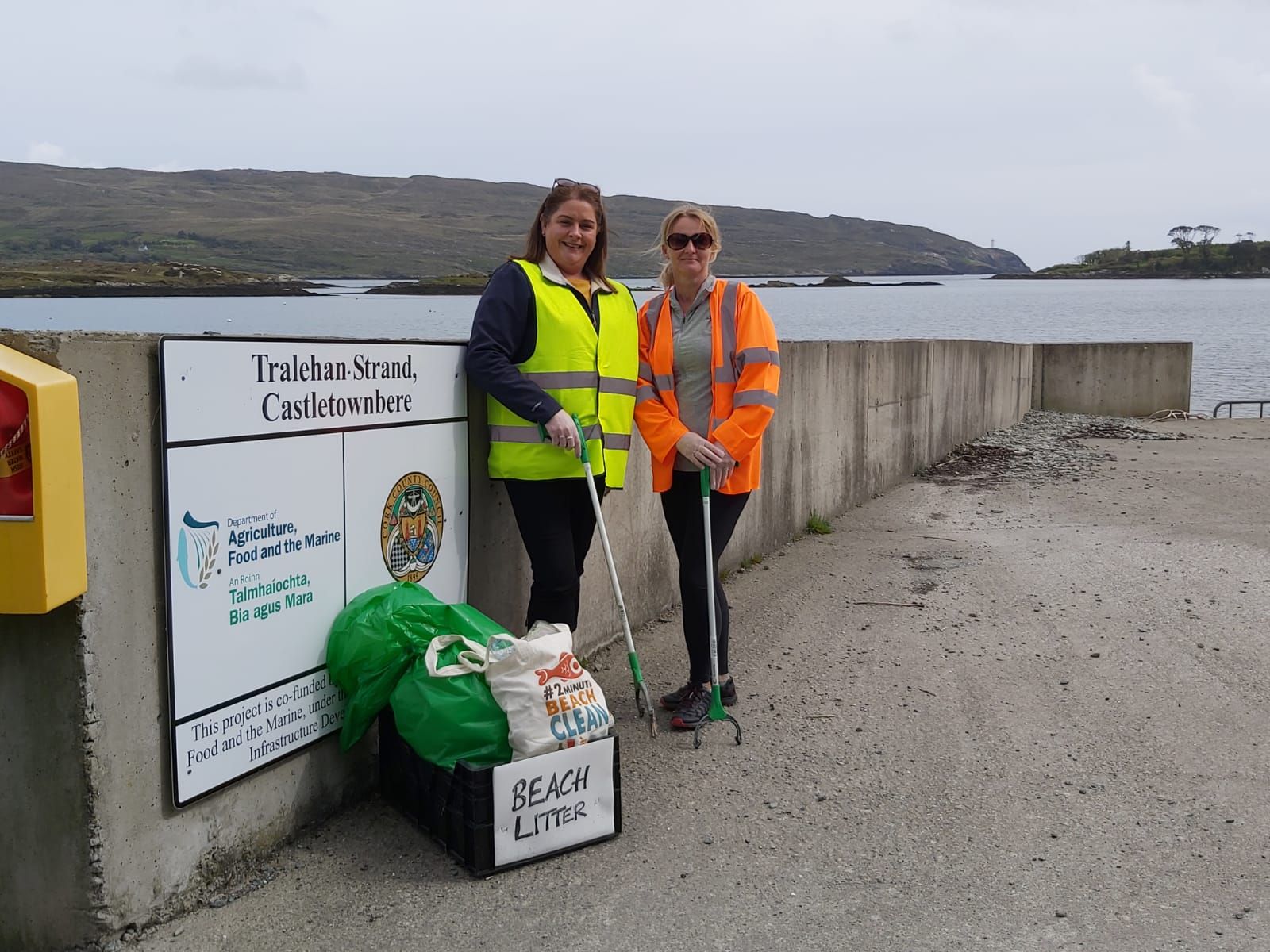