The make-up team working on Holding has a strong West Cork flavour and they all say it’s their dream assignment, despite working 14-hour days on the TV series

EARLY into the shooting of Graham Norton’s novel Holding, The Southern Star got a sneak peek behind the scenes thanks to an all Cork crew in the hair and make-up departments.

Catherine Biggs, who lives in Dunmanway, is in charge of make-up, but she’s ably assisted by Miriam McCarthy from Bantry, and a trainee from Clonakilty, Hannah Deasy.

Rossmore’s Jennie Readman is the hair designer on set and she works with Lynsey O’Leary from Ballincollig and Caroline Keohane from Rossmore.

Catherine said filming of the four-part series about a guard solving crime in a rural village started at the end of July.

The production units decamped to The Showgrounds in Skibbereen while filming took place in nearby farms, but they’ve since moved on to Dunmanway and were in Drimoleague when The Southern Star caught up with Catherine.

‘Of course, lots of work had to be done pre-production,’ she explained. ‘I discussed with Kathy Burke, the director, and the producers the look of the show and what they wanted it to look and feel like on screen.’

A sun-kissed, seaside summer in West Cork would be a short summary of the look they were aiming for, but given the gorgeous actors working on it, Catherine said it is easy to make them look beautiful, naturally.
It’s important for Catherine to use good quality Irish products – the kind that are not tested on animals and the cast of 30 are loving it.

It’s no spoiler to say the male lead, the actor playing the guard, is Conleth Hill of Game of Thrones while the Cork actress Siobhan McSweeney (who recently broke her leg on set) is the leading lady.

Other locations in West Cork will get to be centre stage as shooting continues into October, so locals can expect an even bigger tourism boost in 2022.

For now, the cast are scattered in different accommodation all around West Cork and are thrilled to be living and working in such a beautiful setting.

‘It’s not hard to understand why,’ said Catherine, ‘everyone is so lovely and welcoming, but that is the great thing about Ireland, we don’t get star struck and our famous guests can make themselves at home.’

All this is good for tourism, now and in the future. It’s good for the local economy too, but the real taking point is the fact that there are loads of local extras featuring in the pub and other scenes.

‘These are all lovely, regular extras who have been with the production for a few weeks,’ said Catherine, who is clearly delighted that the hair and make-up teams get to work so close to home.

‘It’s an amazing job. I don’t want it to end,’ said Catherine, who realises it must, of course, end and that will mean going back to the day job of working on photoshoots, commercials and bridal make-up. 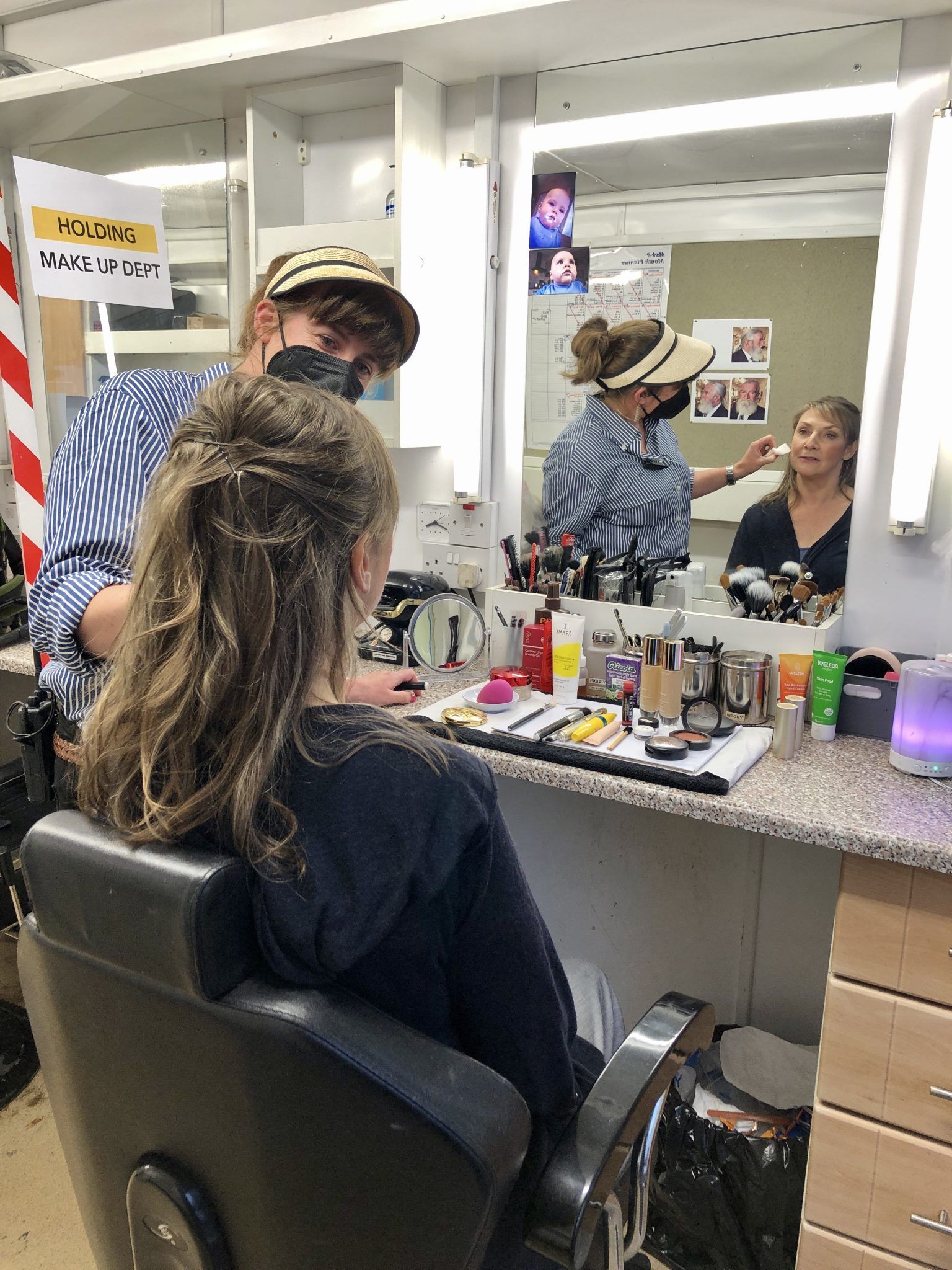 Catherine working on Pauline McLynn ’s make up ahead of filming.

Everyone is hoping that the four-part series will be a huge hit and they’ll all come back and do it all over again next year, or that it might attract other production crews to West Cork.

Amid all the excitement, Catherine said she is working 14-hour days, something that was made possible by her husband, Declan Hurley, a Dunmanway-based farmer who is also an elected Independent member of Cork County Council.

‘Declan is on primary parenting duties,’ said Catherine, who doesn’t shy away from the fact that raising a 16-month old can be exhausting.

‘They say your child will be your biggest teacher. That you learn patience,’ she added, ‘well, Declan has a lot more patience than me.’

Fourteen hour days would not be possible without also drawing on the support of an excellent child minder in Dunmanway and her mother Angela too.

For more than two decades, Catherine worked on big budget movies but it was while working on Mad Max in arid African deserts that she truly missed the green green grass of home.

Catherine, who is from Dublin but grew up in Mayo before relocating with family to Cork city, started her career as an apprentice hairdresser in the 1990s.

‘I knew I needed to do something more so I studied make-up for film and television at the Dun Laoghaire Institute of Art Design and Technology.’

Before that she said she had been to a tiny secondary school that didn’t offer art as one of its subjects. It was the portfolio she did at home that earned her a place on the course.

When she first began working on sets, she said she knew she had found her calling. As luck would have it, they were filming King Arthur in Wicklow when she graduated and she was taken on as a trainee.

‘That gave me a great sense of what it would be like to move on to a major movie set. It gave me great experience and training too,’ she added.

In 2000, Catherine decided to go to Australia for a year but ended up staying for 10. There she got the opportunity to work on major movies like Australia and The Great Gatsby.

Not even a dream job of looking after the lead – no less a personage than Tom Hardy – in Mad Max could keep her from missing home.

‘Yes, the film companies do look after you really well and you do get to travel to all of these amazing locations, but I found I was missing family, friends, special occasions and Ireland.

‘I moved home mid-recession, but I was really fortunate to get a job working on Vikings, which was being filmed in Wicklow.

‘I was on that for a couple of seasons,’ said Catherine, ‘the make-up was so good – lots of battles and beards – and after that I did some gorgeous Irish films such as Jimmy’s Hall, Song of Granite and Kissing Candice.’

Somewhere at the back of Catherine’s mind there was always the urge to go back to college and get a degree in fine art. It was mid-way through this particular course at the Crawford College of Art that she met and married Declan.

The three year course finished last May. Since then Catherine has done a few exhibitions in photography and print, got married, and had a baby, Conan.

After trying dating on tinder, Catherine said it was amazing to meet someone in real life. Someone with whom she could connect. Someone she said who is ‘open-minded and very kind.’ In fact, she said, ‘Declan is the kindest person I know.’

Having Conan presented an opportunity to defer college but when the regional Covid-19 lockdowns started, Catherine said they allowed her to attend lectures online, work from home, and look after Conan. 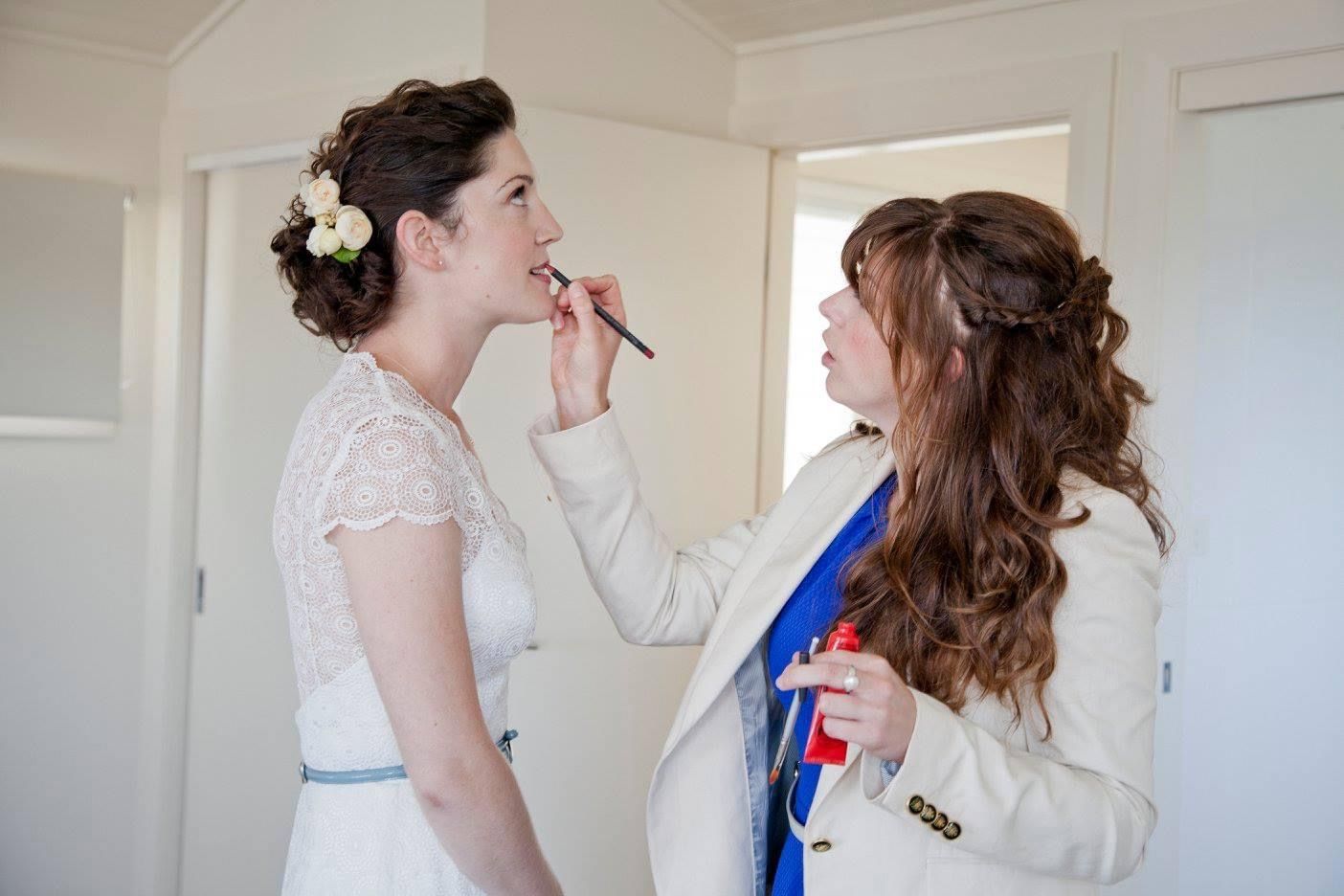 Catherine Biggs is also in demand for commercials and bridal make-up.

There was more good luck when just before college finished the people from the Holding production company contacted her and asked her to interview for the position she now holds. Speaking on behalf of Miriam, Hannah, Jennie, Lynsey and Caroline, Catherine said, ‘Normally we all would have to travel to Dublin for work.

‘Now, for the first time, we have this project on our doorstep and are able to work close to home.’