WHEN Ronan Sheehan scored 605 points in his Leaving Cert some years back, his friends joked that it was wasted on him.

He more than qualified for his first choice of course, medicine, but changed his mind to study arts in NUI Maynooth, and enter the seminary there to study for the priesthood.

Starting out in a class of 20, just five completed their studies and last month he was ordained a deacon, and will be further ordained a priest next year.

He’s now settling into his work in the city parish of Ballinlough and is relishing every moment.

Living alone for the first time in his life, he jokes: ‘There’s no Mrs Doyle here,’ before adding that he had good home training and is well able to look after himself.

The second eldest of five, he turned 27 two days after his ordination which was ‘the best present’ he could have asked for.

‘Blessed among women,’ as he says himself, he has four sisters: Ciara (29) who is married with a baby girl; Leona (24) who works in the UK; Orlaith, who is about to turn 20 and is studying to be a home economics teacher in St Angela’s College, Sligo and Aoibhe who is in Leaving Cert in Coláiste na Toirbhirte in Bandon.

Mum Denise is an SNA in a city school and dad is Bud (Francis) who is a bus driver.

Growing up in Murragh-Templemartin near Newcestown, his wasn’t an overly religious household, in fact from the ages of 12-15, he scarcely attended mass at all.

‘I’d describe it as a good Christian home, generous and caring. But growing up the idea of being a priest was always there niggling at me, and I was drawn to it,’ he said.

‘It started to become something more in my mid-teens, I started to go to mass more frequently and I was drawn in further, the idea became stronger,’ he said.

At the same time he was still contemplating a career in medicine or law, but that ‘gentle voice in the background’ remained.  The ultimate pull to the seminary was, he said, witnessing the local clergy, men of God, helping people, being there at critical moments for them and being of service.

‘I found all that very appealing,’ he said.

He took the plunge and entered the seminary in Maynooth in 2013 when he was on the verge of turning 19.

‘I felt I’d go and get my arts degree at least and there would be time to help me fully decide if I’d commit,’ he said.

When he announced his plans, he remembers nothing but good wishes.

‘My family really weren’t at all surprised. My older two sisters especially knew it was coming and were supportive throughout,’ he said.

‘I really loved the seminary. It was a place of prayer and study and it was the first time that I felt I was among a fraternity,’ he said.

Naturally when fellow students chose to leave it was difficult. ‘I had one friend who did five years and then left. I was very upset, but it was the right thing for him. It did prompt questions though, such as “If he’s leaving, why am I staying?” But I still felt that calling.’

Ronan remained confident that he was ‘on the right path. 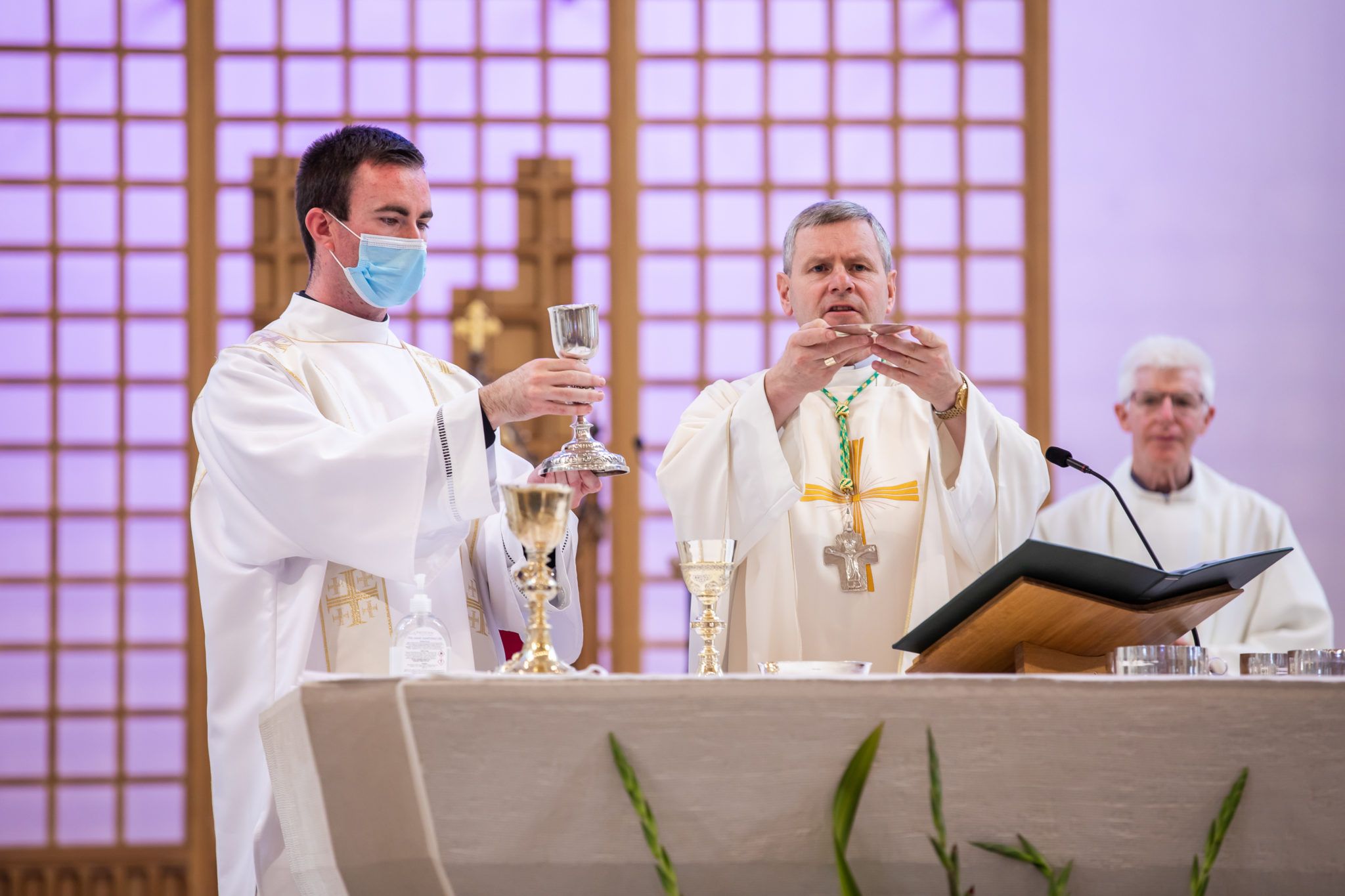 Rev Ronan Sheehan at his recent ordination by Bishop Fintan Gavin at the Cathedral of Ss Mary and Anne in Cork. (Photo: Peter Pietrzak)

‘I put a lot of thought and prayer into it. I kept an open mind but at the same time, I felt that I was ready to make that commitment and I did it in the spirit of freedom.’

After that he spent six months getting pastoral experience in Turner’s Cross, and had four three-month stints working in the CUH and the Mater Private as a trainee chaplain. He also worked in the Bon Secours hospital at the tail end of Covid, last June, July and August.

He’s been working in Ballinlough since September, in advance of the ordination which he said was a good thing.

‘It shows that priests don’t simply drop from the sky or grow on trees!’ He’s now what’s called a ‘transitional deacon’ and will be ordained a priest in a year’s time.

‘What’s involved is not underestimated and that’s part of why the church asks you to take so long to get to that stage. I was very different at 18 compared to how I am now.’

He accepts the fact that he won’t marry or have children, and in the short term at least, can’t see that rule changing in the Catholic Church.

He has a niece, and when she was born he expected he’d be faced with feelings on this: ‘I felt great joy for my sister and her husband but I didn’t feel like it’s something I’d miss out on.

‘I’m happy with that decision. A lot of good men have left the priesthood to get married but I don’t think a change in that rule would generate the volume of priests that are needed. It’s not that magic fix. We’re still looking for that one.’

On the issue of falling numbers of priests due to retirements and a reduced mass schedule in the diocese, he acknowledges that ‘radical change’ is needed.

‘We’re on the cusp of something new, a transition on how we function as a parish. Maybe it’s our fault, or it’s a cultural thing, but people seem to think that you’re either a priest or nothing at all in the church. But Baptism is the start of people’s entry to their life in the church, and not ordination.’

His thoughts on the ordination of women priests?

‘That’s a touchy one,’ he said. ‘But the church has been clear that won’t happen for theological and historical reasons. It would be better to ask instead “what roles can both men and women have in a Christian community?” And it’s the men and women of faith, who will, by necessity, keep parishes going as their roles change. There’s still a need for the pastor, the priest, but there are more roles to play.’

Regarding the clerical abuse scandals that have rocked the church, he said, having met abuse survivors, that it made his ‘stomach sink to think what happened and how it continued for so long.’

Since becoming a deacon he’s now able to wear his priest’s collar, which is taking some getting used to. 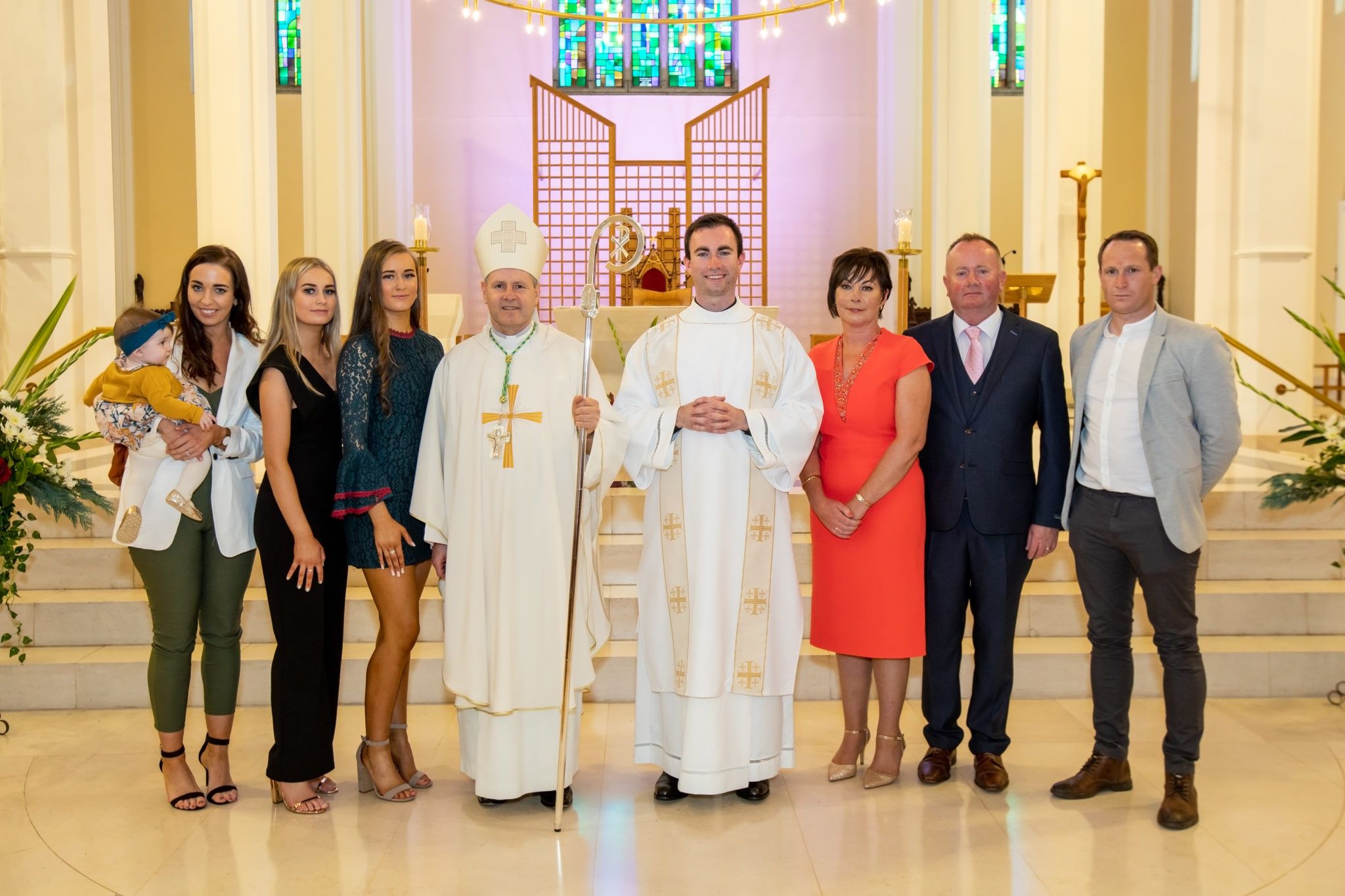 ‘The odd time alright you might get a look wearing it, or I’ve seen friends get a glare, but you have to realise that something in that person’s life led to that reaction. Most people are fine with it and I have to rely on my own sense of integrity,’ he said.

Growing up he said he wasn’t what you’d call a ‘disco head.’ ‘When we were younger I’d go to the Boiler Room in Clonakilty. I didn’t really like clubs but I did enjoy a few beers and socialising with a core group of friends. I had one what you’d call juvenile romance alright. I remember writing her poetry and it was lovely!’

Now his hobbies include walking, reading (he’s looking forward to getting stuck into Sally Rooney’s latest book) and hosting dinners for friends, when he’s not busy with his parish work.

‘Ultimately I’m excited and filled with a sense of joy for my future. But I’m in the same boat as every Christian so I’m also nervous at how a parish will look in the future and what role the priest will have. But Bishop Fintan is a courageous leader and I’ve great trust in him and I know that the Holy Spirit will remain as the heartbeat of the church.’