EDITOR – It’s been almost a year since improvements to the children’s park adjacent to Mill Road, Skibbereen were completed. Generally, it’s a great improvement and a fantastic free facility for local residents and visitors. However, there is no suitable seating.

All of the seats are now metal castings. It’s the same at the bus stop on Market Street.

From late October until mid-Spring, very few people will brave sitting on them as the very cold metal surface conducts the heat away from your body. They are effectively useless for six months of the year.

Before the park improvements, there were warm seating hardwood-based benches. At a fraction of the cost, these could have been repaired with new wooden or fibreglass bases, as can be experienced at the O’Donovan Rossa Memorial Park. At the time of construction, I mentioned the obvious problem to workmen. I pointed out that the old benches were more suitable, and there had also been wooden planks along the top of the low wall separating the children and adult equipment.

The wall is now concrete-slabbed on top, so it has the same problem as the new benches in being viable seating. Anyway, the workmen informed me that they just do as instructed. I was going to make an issue of the unsuitable seating, but then in the spring just gone, two wooden picnic tables with seats appeared.

They were very popular as seating and for families to lunch. However, at the end of summer, the picnic benches were removed, leaving only the metal-based seating.  So now parents and carers mainly stand, or sit in their vehicle if they have one. Elderly park users are no longer seen any more since the warmer wooden bases were removed.

Since October, I’ve contacted the Council via email numerous times. Neither the Council nor councillors have responded. By phone, I’ve been referred to others, all of whom have ignored me. I’m appalled by the lack of response.

Since the metal benches must have been expensive to supply and fit, it’s understandable that the Council would not want the expense of changing them again. But partial temporary solutions could be found, such as returning the wooden picnic tables, tastefully fitting wooden planks to the top of the as-mentioned low wall, or bringing back the perfectly serviceable old benches that only need a couple of wooden lengths replacing.

With the world seemingly going to hell in the bigger picture of things, the local park may seem a trivial issue to some, but surely with a few minor and inexpensive changes, the local play area could once again become an oasis for weary parents and carers to sit and rest, while the children play, exercise and make their mischief. 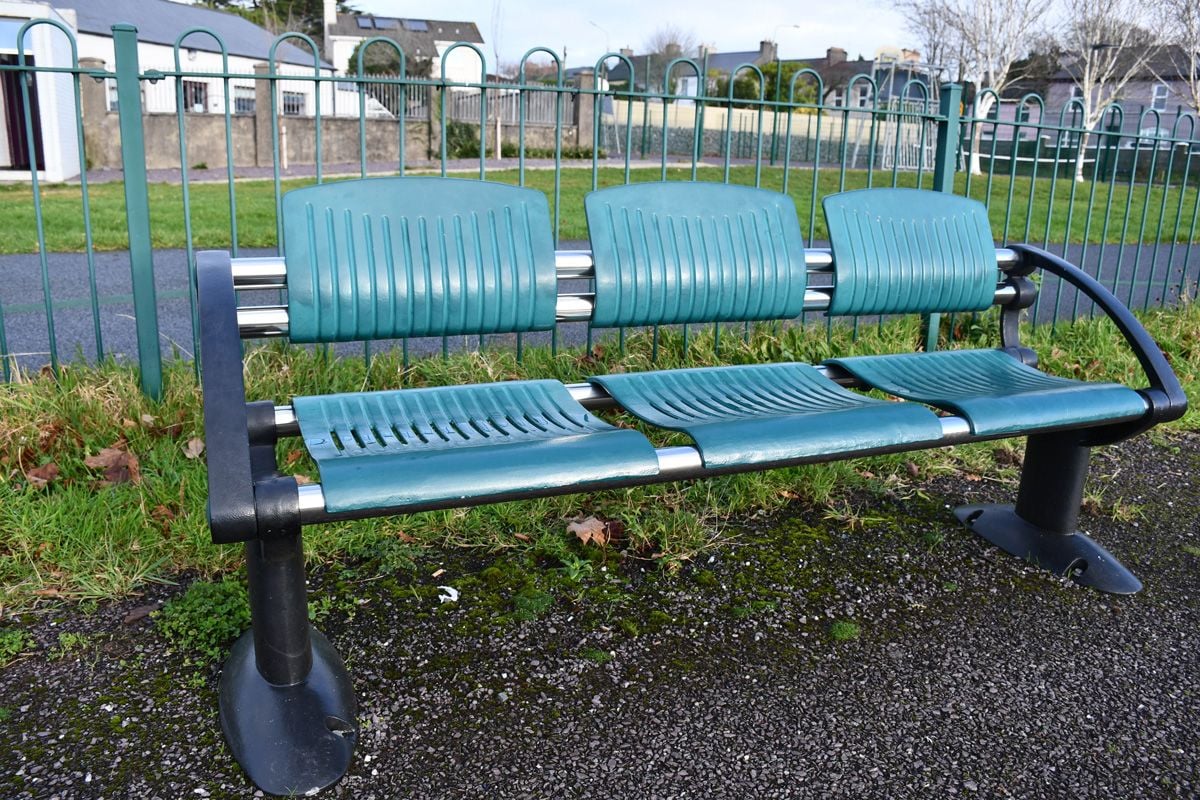 Our reader says these seats at the playground are too cold for six months of the year. (Photo: Anne Minihane)

A timely message from the big man himself

EDITOR – Season’s Greetings to everyone from the North Pole!

Letters are pouring in from all around the world so I would like to remind all the boys and girls in Ireland to write and post their letters to me as soon as possible.

The elves are working very hard to ensure that all the toys and gifts are ready in time for Christmas!

This is what the boys and girls should do:

Write their letter to me straight away.

Put it in an envelope, seal it and address it to:

Write their own name and full postal address (in very clear

Stick a stamp on the top right-hand corner and

It’s that easy! My friends in An Post are helping me to reply to as many children’s letters as possible before Christmas this year.

And a word to the adults – do get posting your cards and parcels to family and friends straight away!

Christmas is getting very close now and there is snow and ice and other challenges in many places, so please allow time for your post to reach your loved ones before the big day.

Wishing you all a very happy and peaceful Christmas.

Time for main parties to learn some compassion

EDITOR – The end of State funding for greyhound racing is hopefully edging closer after the Dáil vote on this year’s handout to the industry.

Though the annual funding arrangement was again pushed through on a whipped vote by the government, it was opposed this time by Sinn Féin, Labour, the Social Democrats and People before Profit. Previously Sinn Fein had backed the funding, as had Labour under Alan Kelly’s leadership. I pray that this signals the beginning of a sea-change in political attitudes to the propping up of an industry that is steeped in animal cruelty and has a consistent track record of putting profit before animal welfare. And that’s apart from the fact that attendances at tracks have fallen dramatically in the past five years.

The 2019 RTÉ documentary Greyhounds running for their Lives detailed a litany of appalling abuses in the industry, including doping, the killing of unwanted or underperforming dogs, the mysterious disappearance of around 6000 greyhounds every year, and the exporting of dogs to dodgy jurisdictions were animal protection is virtually non-existent.

An additional stain on the industry not covered by the RTÉ programme is the widespread practice of blooding, whereby live animals such as feral or stray cats and wild rabbits are fed to dogs in training sessions. Some animals have their back legs broken or are suspended from cords for the purpose of teasing the dogs and whipping them into frenzy of bloodlust, all with a view to enhancing their performance on the track or coursing field. The industry will insist that blooding is illegal. But like doping, and the shallow graves of dogs unearthed across the country, it is an integral part of the game.

It now remains for Fianna Fáil and Fine Gael to join the ranks of the compassionate. It would make Ireland safer for the innocent little cats, rabbits, and hares that suffer in this so-called ‘rural pastime’, the only sport that has a finishing gun instead of a starting one.