DAFFODIL bulbs are pushing leaves up through the ground and buds are bursting on some plants in the garden and hedgerows. There’s even spring birdsong to listen to as you wander outdoors – all in all there’s a feeling that winter hasn’t treated us too badly.

Don’t be lulled into a false sense of security! It’s mostly hardy plants that are making an early burst of growth. Some get off to an early start each year and these seldom suffer if this is followed by a cold snap. If you spot any tender plants making a burst for it, then keep a close eye and cover them if needed. Freezing winds can be fatal if new leaves are burned just as they open.

Snowdrop and Iris reticulata are some of the earliest bulbs to flower. They often don’t last for too long so be sure to enjoy the display while it is at its best. Keep an eye out and move plants in pots to a premium position near the house door. That way you will see them often and enjoy the earliest flowers of the year.

Clumps of snowdrops can be divided after the flowers finish and before green leaves die back. Moving bulbs ‘in the green’ as it is called, can lead to better establishment and flowering next year. Don’t remove snowdrops if they have established in the wild and certainly don’t remove any from gardens without permission. It’s easy enough to buy bulbs in the autumn.

There are already some early varieties of seed potato for sale and it’s a good idea to buy early while there is some choice. Choose firm potatoes with small signs of shoots and put these to chit as soon as possible. ‘Chit’ simply means to put them in a light cool place with the shoot end pointing upwards. This helps the potatoes to grow strong short green shoots rather than vulnerable long white ones. If you only plant a few potatoes then it’s easy to chit them in egg boxes. Put one potato in each depression. It will take a few weeks for shoots to grow, but well-chitted potatoes always grow faster than un-chitted ones when you plant them. Use larger trays to set potatoes out in a single layer if you want to grow lots of potatoes. 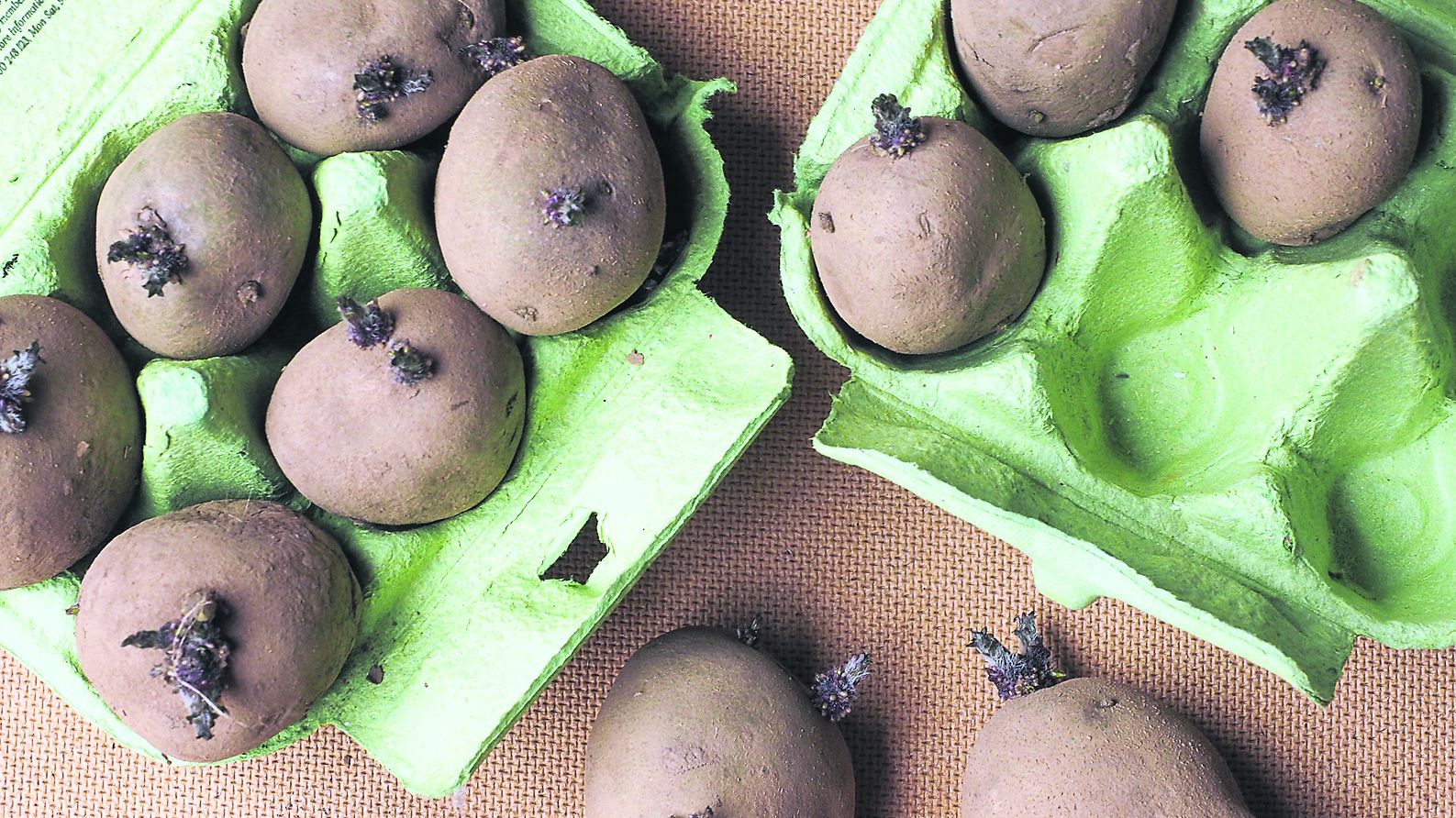 It’s worth noting that a lot of seed potatoes used to be imported from Scotland and this is no longer a simple matter. It is more likely that the seed you find now will be sourced in Northern Ireland or Europe. You should be able to find your favourite varieties, but they can sell out quickly.

If you planted peas and broad beans in a greenhouse or polytunnel last autumn, then plants should be growing well. Support is important if you want to keep plants upright, so push small twiggy sticks along each side of a pea row. You will add taller twiggy branches or use pea netting at a later date, but for now it’s all about getting the small plants growing upwards. Pea plants grow tendrils to twine around supports which help keep them upright and steady. 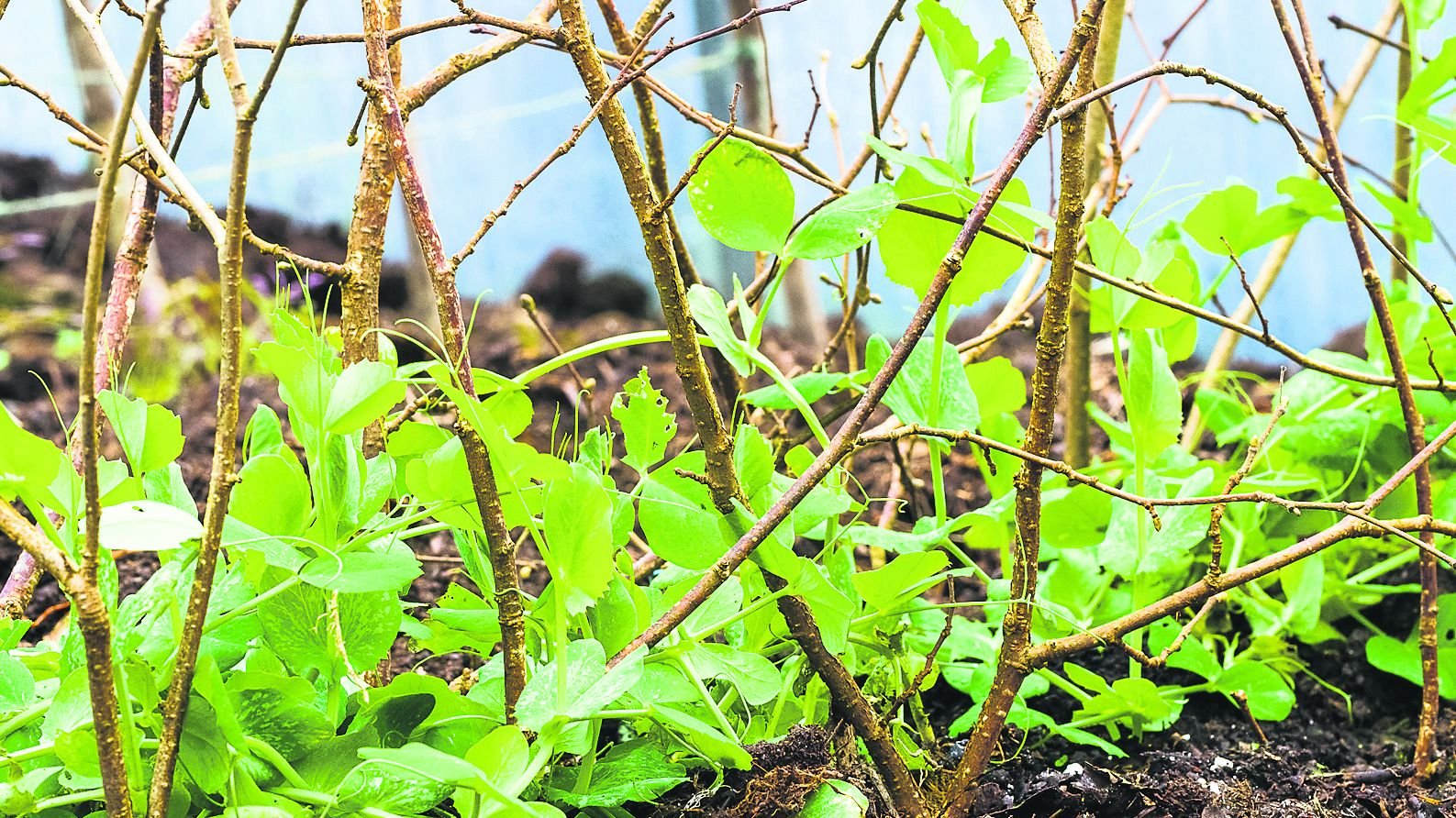 Broad beans  have stout stems but these can snap easily. Use poles and string to form a ‘fence around the outside of the row. This will stop plants falling over and breaking.

Don’t be in too big a rush to get sowing. Seeds can be slow to germinate in cold wet ground and ones sown a couple of weeks later, in more favourable conditions, can soon overtake the early ones. There are one or two things that do well from an early start, so if you are keen, it’s worth starting sowing. A propagator, or the protection of a greenhouse, can make a big difference to success rates.

Aubergines need a long growing season if they are to flower and set fruit when the weather is warm and sunny. Start a few seeds in a propagator set at 20C.

You can sow several seeds in one pot and pot them on into individual pots when the seedlings are big enough to handle. Don’t let temperatures drop below 15C while plants are growing.

Salad leaves can go directly in rows in the soil in a polytunnel or greenhouse. Put a layer of horticultural fleece over the rows and scatter a few organic slug pellets if these pests are active in a mild winter. Outdoor sowings should wait a few more weeks until the soil warms up.

I make the first sowings of spring and summer lettuce varieties at the end of January. Start a few seeds from different varieties in trays or pots. Try to keep temperatures between 10-12C if you want sturdy plants.