Paul and Gary O'Donovan in action at the 2016 Olympic Games in Rio de Janeiro.

The competition is heating up as five Skibbereen rowers battle for the two seats in the Olympic-bound Irish men’s lightweight double. Involving two sets of brothers and best friends, KIERAN McCARTHY looks at who is in the running for Tokyo

THE maths in this rowing equation is quite straightforward: five rowers can’t fit into the same double so it means three have to miss out.

The competition for those two seats in the Irish men’s lightweight double that is bound for this summer’s Olympic Games in Tokyo is intense.

Adding to the intrigue, the five main contenders are all from Skibbereen Rowing Club, and they’re all from the same parish of Aughadown.

We all know about the exploits of the Lisheen brothers Gary and Paul O’Donovan, Ireland’s first-ever Olympic medallists when they brought home silver from Rio in 2016.

Between 2015 and 2018, Gary and Paul went unchallenged in the Irish lightweight double, but the landscape has changed now with the emergence of twins Jake and Fintan McCarthy (from Foherlagh in Aughadown), as well as the return to the lightweight scene of Shane O’Driscoll (pictured above), another Lisheen man, after his heavyweight experiment.

These are the main five contenders for the Irish lightweight double and while we can’t discount a bolter from the rest of the chasing pack (we will learn who’s in the running when Rowing Ireland announce their invitations for the next trials at the end of February), it’s almost certain that the double combination will come from this Skibb quintet.

All five are world-class rowers and whatever combination is put forward to represent Ireland in Tokyo will be in contention for a medal. These are the best of the best lightweight rowers in Ireland, the elite.

At the last two World Rowing Championships, the Irish men’s lightweight double has won gold and they’ll be in the conversation for the gold medal at the Olympics.

Recently, they were in action at the Irish Indoor Rowing Championships in Limerick, and, no surprise, Paul O’Donovan dominated the headlines. Twelve months after setting an Irish record at the same event, Paul set a new Irish lightweight men’s record with a time of 6:04.8 over 2000m on the rowing machine; the man himself is a machine. Fintan finished second with a personal best (6:10.0), Shane was third and also hit a new PB (6:11.5) with Jake in fourth (6:18.3). Gary didn’t take part as he was ill.

Before that, the Irish lightweight group – overseen by Rowing Ireland High Performance coach Dominic Casey, yet another Skibbereen rowing and Aughadown connection – spent 17 days in Seville on a training camp; crucial preparation to lay a base for the huge year ahead and also to provide indicators ahead of selection.

‘There are five of us training away in a group at the moment, we would be the main contenders but it’s open to everyone at the trials,’ Fintan McCarthy said.

‘There are another set of trials in February, and we had the indoor championships as well, and then the big trial is in March, which will kind of decide the boat that will go forward to the World Cups and we’ll see what happens then.’

As always, the latest camp was a test of endurance, physical and mental. With the Olympics approaching, it focuses the mind. Before that, all five rowers are giving it everything to win one of the two seats up for grabs.

‘It was tough,’ Fintan McCarthy said of the latest camp.

‘This was a bit longer than usual, we were there for 17 days. It was good, productive, we were all mixing up in different combinations, testing, getting used to each other, so we will be ready when it comes to selection that we can hop into different doubles so we can race.’

‘In our first camp this year (in November) we did most of our work in the single sculls. Now that Paul is back in the mix after college, we were swapping around more in the double in this latest camp. We do three days with one guy, then swap around, and one guy will be in the single, there is great variety that way, but we still have to do the training.

‘We were doing anything from four hours a day including weights and so on.’

Right now, the general feeling is that Paul O’Donovan will take one seat in the boat. That’s not an outlandish prediction as he is the best rower. Barring injury, he will be there. That leaves four then battling for one seat. 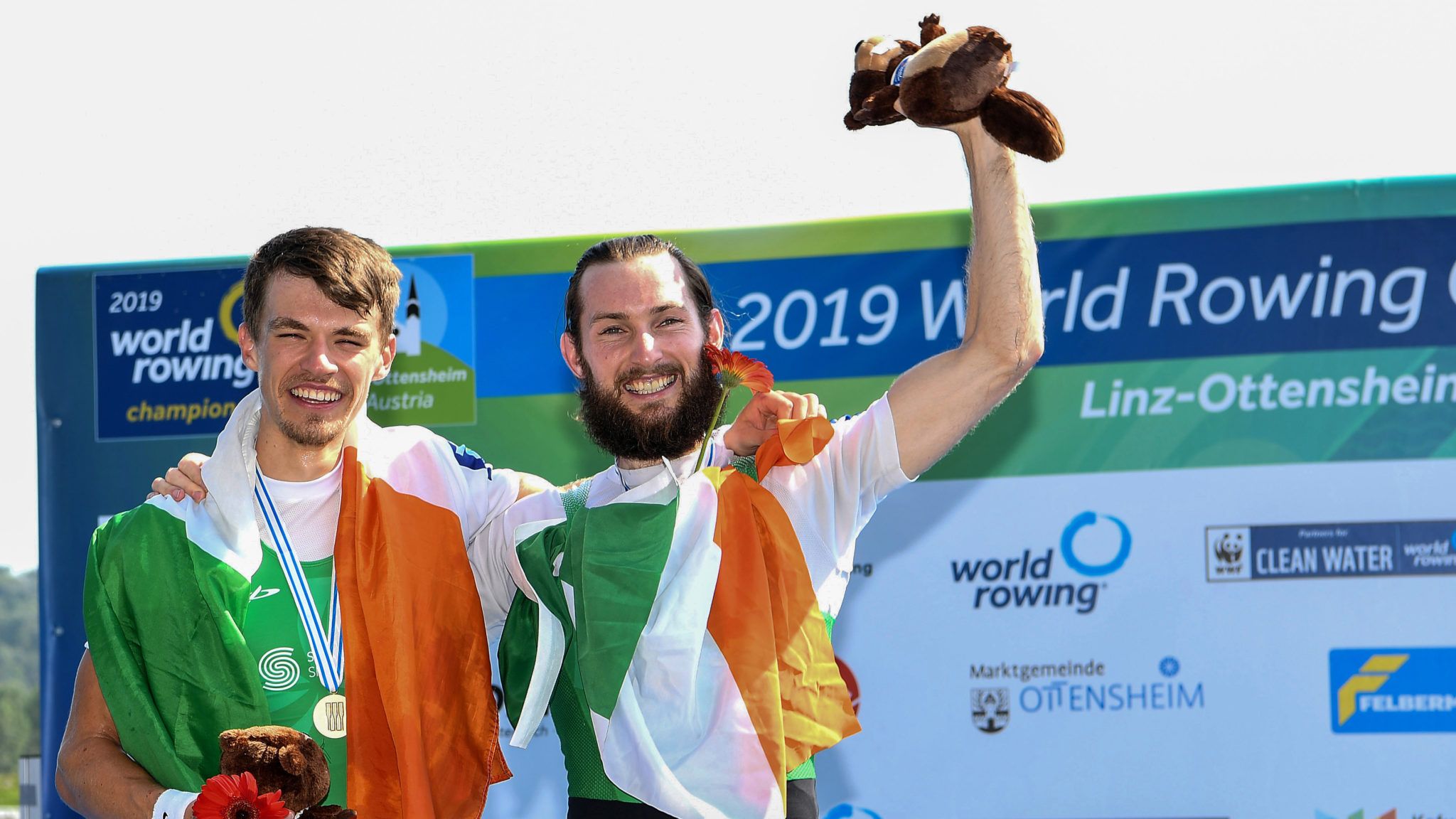 Skibbereen's Fintan McCarthy and Paul O’Donovan celebrate after winning gold in the men's lightweight double sculls final at the World Rowing Championships in Austria on Saturday. The duo also qualified the Irish double for next summer's Olympic Games in Tokyo.

Fintan proved himself last year when he formed a formidable double with Paul that won world gold in their second international regatta as a combination, and there is more to come from them, you feel. Gary is hell bent on winning his seat back in the double after losing it last year and he has really thrown himself into training in an effort to wrestle his seat back. Jake is also in the mix and is building on the progress that he made last year.

Shane is an interesting option, moving back down to lightweight after the change to heavyweight didn’t work out for Mark O’Donovan and himself. In their younger days, Shane and Paul were together in a double, and Shane, with his ability and experience, is a real contender here.

The trials at the of February and March, especially the latter which is the most important one, will decide the selection, and the double named then will go forward into the international scene. A team of three will be selected – two for the boat and one sub.

‘We had the indoor national championships last Saturday, they were on the ergo and they are part of the selection process,’ Rowing Ireland High Performance Director Antonio Maurgiovanni told The Southern Star.

‘Then at the end of February we have the first trials on the 2k distance and then we have the March trials where we will select the Olympic squad.

‘The squad will be tested internationally at World Cup I in April and at World Cup III in May, and after that the Olympic team, including the lightweight double, will be announced.

‘We will have a team of three for World Cup I and World Cup III and we will test the squad of three internationally. If we are happy we will confirm the selection. Otherwise, we will change.’

Depending on results at those two Rowing World Cup regattas there could be changes made to the crew selection before the Olympics in late July, but we will have a clearer picture after the March trials.

‘Once it’s sorted, it is full steam ahead,’ Fintan McCarthy says, ‘and there will be no more anxiety!’

Whatever the outcome, to have five Skibb rowers at that level is already an incredible achievement and the double that goes to Tokyo will be the best of the best.