THE first two text messages Skibbereen Community School manager David Whelton received after his charges qualified for this season’s Corn Uí Mhuirí semi-final were from two former school team-mates who he soldiered alongside at St Fachtna’s.

His current Castlehaven team-mate Michael Hurley congratulated Whelton and Co after they defeated Kerry school Scoil Phobail Sliabh Luachra, 1-14 to 0-14. Ilen Rovers’ forward Sean O’Donovan texted his best wishes, too, along with the hope that Skibbereen CS can go one step further than the class of 2014.

Eight years ago, before Skibbereen Community School had opened its doors in 2016, St Fachtna’s de la Salle flew the Skibb flag in the blue riband Munster colleges’ senior football championship. Fachtna’s had Corn Uí Mhuirí pedigree, too, having won three titles (1982, ’90 and ’91). In 2014, they contested a semi-final against DLS Macroom as the Skibb school chased a first Corn Uí Mhuirí final appearance in 23 years. Given Fachtna’s corridors were soon to stand silent, it was their last realistic chance of winning the competition.

After Skibbereen Community School qualified for its first Corn Uí Mhuirí semi-final, naturally manager David Whelton’s thoughts flickered back to that loss in 2014. It’s a painful memory in one way, but it’s also a reminder of a special time when he went to war alongside players from rival clubs. It’s a message Whelton is keen to pass on to the school’s current footballers.

‘The first two lads to message me after we beat Rathmore were Michael Hurley and Sean O’Donovan. That’s the bond that was there and that stays with you forever,’ he explains.

‘You remember those games, you remember playing with those lads and that’s what I try to emphasise to the boys, to make sure they treasure this and that they also take this opportunity with both hands against Tralee CBS this Saturday in the semi-final.

‘This is a wonderful opportunity right now for the players because down the line you will be playing against your school team-mates at club level. I don't think you realise what a great competition the Corn Uí Mhuirí is until you look back on it afterwards, and the buzz that goes with it.’ 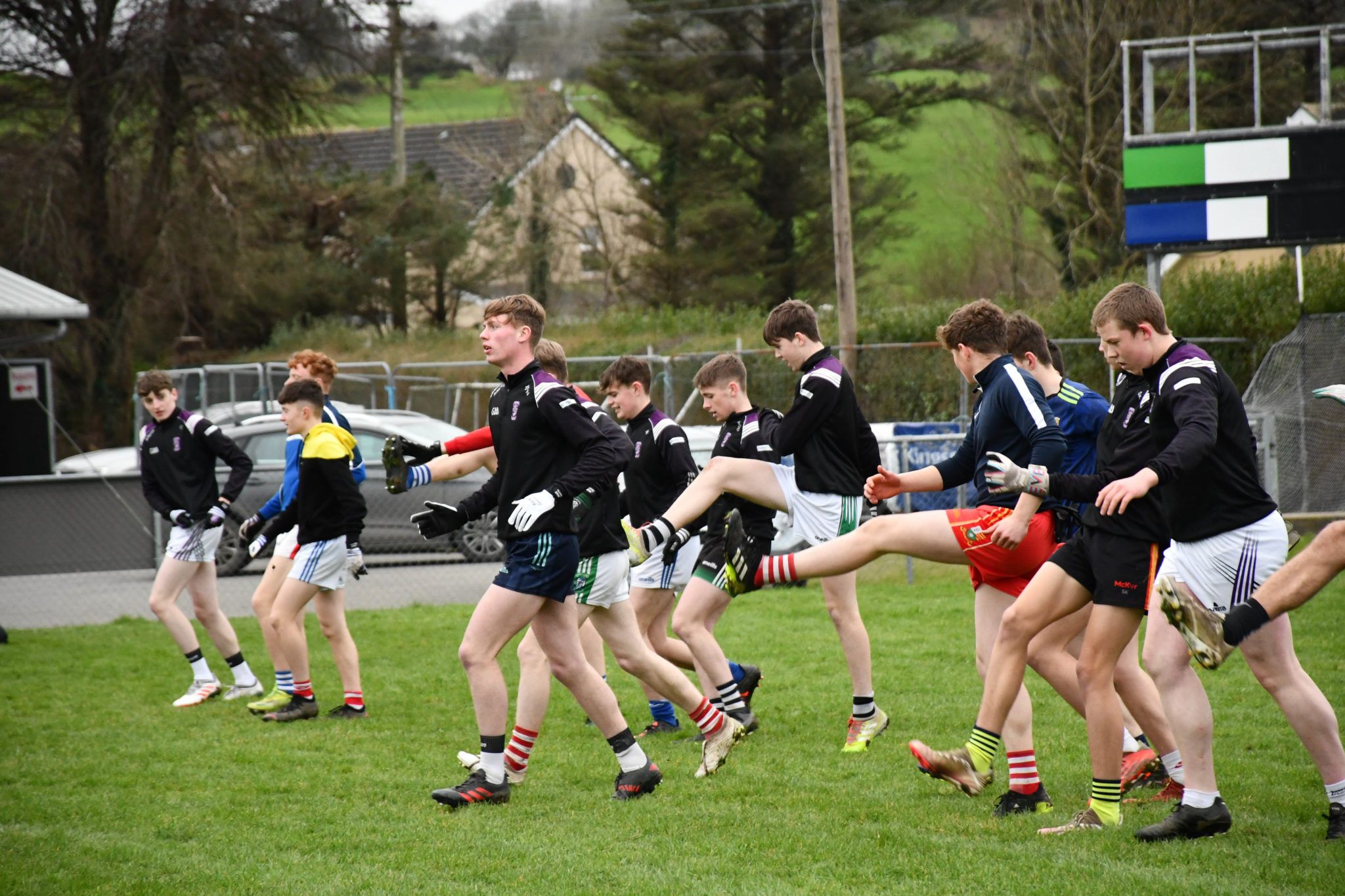 The Skibbereen CS team was put through their paces at the Rossa Park in Skibbereen last week.

There’s a buzz in the school right now after the exploits of its senior footballers. Expectations were low at the start of the season when 24-year-old school teacher Whelton took the reins. The Castlehaven senior couldn’t say no to an opportunity to learn what life’s like outside the white lines.

‘At the start of the year they were looking for a trainer for the senior team, expectations weren’t that high either because the school hasn't been performing so there was no pressure on me. I said I’d give it a go,’ Whelton says, and it didn’t take long for momentum to build.

With Carbery GDA James McCarthy (Whelton’s manager at Castlehaven), Carbery GPO Paudie Crowley and teacher Colman O’Driscoll (who managed the Fachtna’s team in 2014 and has kept the football show on the road in Fachtna’s and Skibb CS for many, many years) all involved and offering their wisdom, Whelton’s Skibbereen CS team started their Corn Uí Mhuirí campaign with a bang in early November: they defeated Coláiste na Sceilge by 1-19 to 1-7. Ilen Rovers’ Niall Daly led the way with 1-7 (2f). Luke Shorten (0-5), Robbie Minihane (0-4), Sean Browne (0-2) and Jamie O’Driscoll (0-1) were all on target, too. Whelton remembers the na Sceilge manager walking down the line towards him at the end of the second half to say “ye have a serious team there”. Whelton nodded in agreement. After that win, training went from one day a week to two. The players bought into it – and they were up and running.

‘The first game was a great springboard for us. We told the lads that it was the school’s first win in the Corn Uí Mhuirí in a few years, that it was important to build on that and to make sure that we are still going after Christmas and into the knock-out stages where we’ve seen the likes of Hammies and Clonakilty involved,’ Whelton says, and they guaranteed their quarter-final place when they defeated Coláiste Choilm Ballincollig (2-10 to 0-12). Niall Daly impressed again, and Luke Shorten (1-2) and Robbie Minihane (1-1) topped the scoring charts. The team is led by its three 2021 Cork minor forwards, the Castlehaven pair of Jack O’Neill and Jamie O’Driscoll and Ilen’s Niall Daly. The spine of the side is strong, as well, from goalkeeper Shane Kingston (Tadhg MacCarthaigh) to full back Joseph Bohane (Castlehaven) to centre back Tomás O’Mahony (Castlehaven) to Tomás Ó Donnabháin (Clonakilty) and then into a strong attack that also includes Castlehaven senior Robbie Minihane. 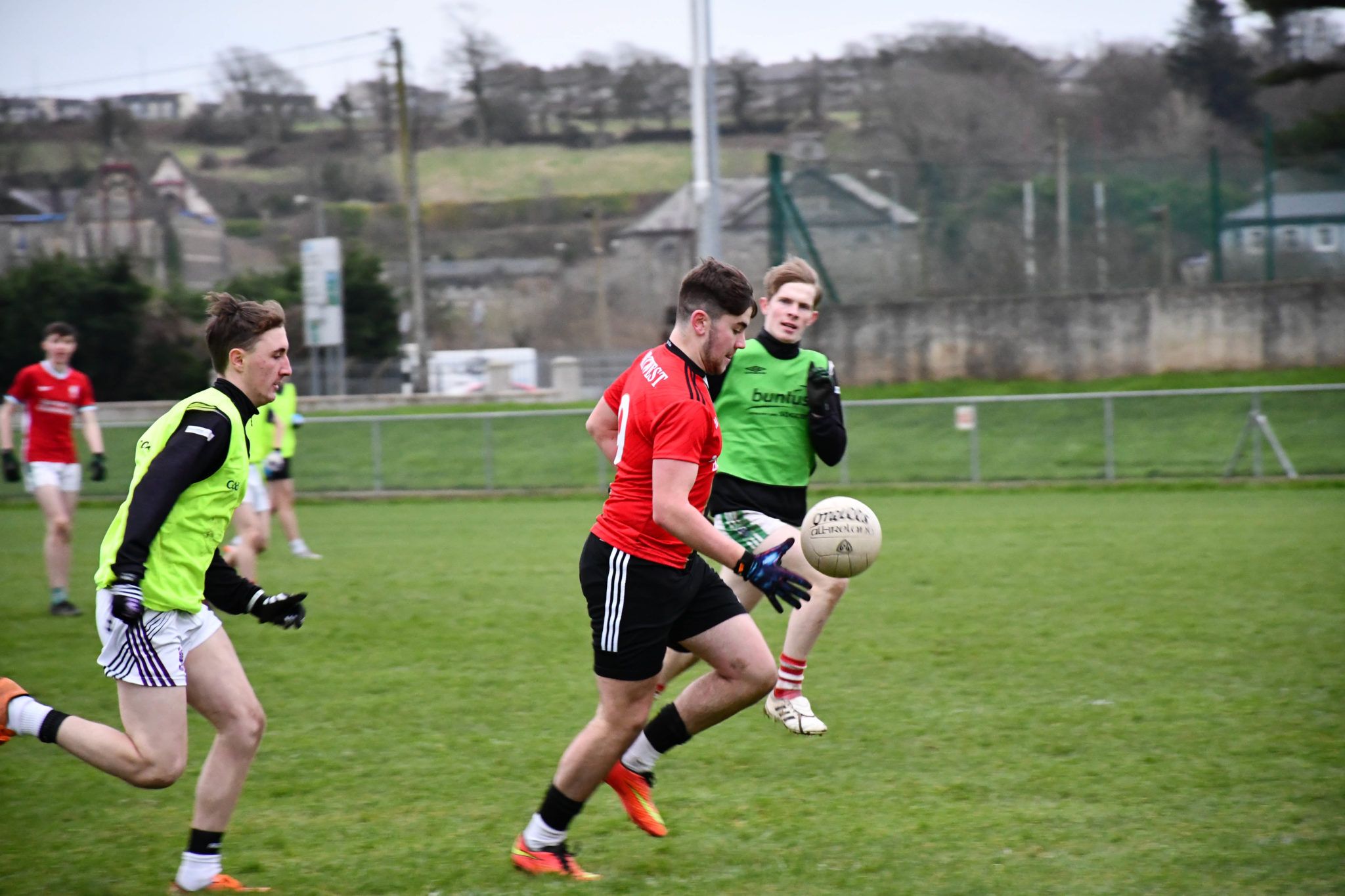 Their quarter-final win against Rathmore told a lot of this team’s character as they had to dig deep and rally from three points down inside the home stretch before winning by three, inspired by sub Jack O’Brien’s 57th-minute goal.

‘We were very happy with the impact of our bench. Jack O’Brien scored a super goal. Equally, Isaac Harte came on at half time and lifted the standard of the performance big-time and kicked over two beauties. Oisin Daly came on towards the end and punched over an invaluable point as well. I also thought we were fitter, we finished the game strong and we were very composed and economical in front of the goal,’ reflects Whelton, but all attention now is on the semi-final against Tralee CBS this Saturday in Mallow (3.30pm).

The Kerry school beat Clonakilty Community College in their quarter-final and can call on Austin Stacks senior Armin Heinrich in midfield and former national sprint champion Jordan Kissane in attack. It will be Skibb’s toughest test so far but they’re ready to cause a shock and seize the chance they have right now. Like former Fachtna’s forward Sean O’Donovan told Whelton, the hope is this current group can go one step further than the class of 2014.