The Castlehaven U21 side that confirmed their Cork LGFA U21 C county championship quarter-final place following a 5-12 to 5-4 win over Dromtarriffe.

O’Donovan Rossa and St Val’s clashed in a U21B county quarter-final with the West Cork side edging the result, 1-13 to 3-6. Val’s led 2-5 to 1-5 at the interval but O’Donovan Rossa earned a county semi-final berth thanks to a much-improved second half display.

There was some confusion at the end of a game as St Val’s thought it ended in a draw but it was Rossas that went through thanks to scores from Munster Young Player of the Year Lia Hogan (0-6), Áine McCarthy (1-2), Aoife O’Driscoll (0-2) and Triona Murphy (0-1).

The Skibbereen club will face Ballinora in the last four after they defeated Clonakilty 3-6 to 2-8 in Ahamilla. Aoife O’Flynn-Meade (2-0), Aisling Moloney (0-3), Siofra Patwell (0-2), Katie O’Driscoll, Rachel Deasy and Leah McAree (0-1 each) were on target for Clonakilty.

Dohenys qualified for the U21B county championship semi-finals courtesy of a 1-9 to 1-5 victory over Bride Rovers. A sometimes bruising encounter saw Ava O’Donovan, Mairead Crowley and Katelyn Sheehan (0-3 each) plus Michelle Love (1-0) scores send Dohenys through. Whoever emerges from Kinsale versus the winners of Naomh Abán and Valley Rovers’ rearranged quarter-final will face Dohenys in the last four.

Castlehaven confirmed their Cork LGFA U21C county championship quarter-final place following a 5-12 to 5-4 win over Dromtarriffe. Extra-time was needed to separate the sides after it finished 3-9 to 5-3 at full-time. Grace O’Connell (2-0), Ria Wilson (0-6), Becca Sheehy (0-4), Aine Daly (1-0), Kate O’Connell (1-0), Jessica McCarthy, Muireann O’Donnell and Emma Buckley were amongst Castlehaven’s scorers. The West Cork side will face either Rockbán or Killshannig in the last eight.

Nemo Rangers knocked Bantry Blues out of the same competition following a 3-7 to 1-5 triumph in Bantry. Aoife Kingston (1-2), Zara Barry, Lauren Manning and Holly Sheehan (0-1 each) scored for the Blues. Bandon will take on Macroom in the U21C quarter-finals after the Lilywhites received a walkover from Banteer. Macroom defeated Rosscarbery 6-11 to 2-12 in the same competition. 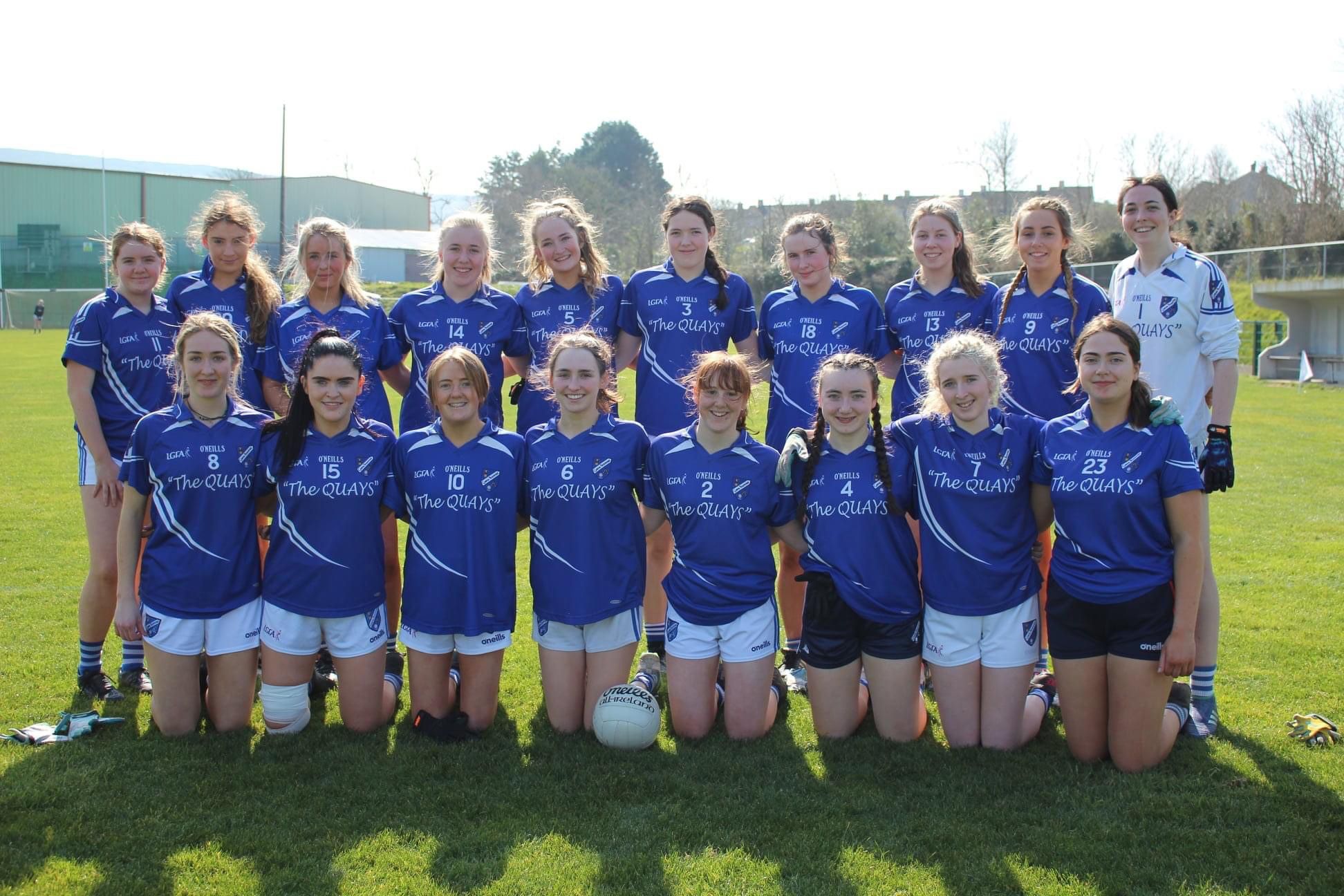 The Bantry Blues U21 team that lost to Nemo Rangers in the county championship last weekend.

Ibane Ladies are through to a Cork LGFA U21D county semi-final after they knocked Passage out, 2-10 to 2-7, last week. Ellen O’Riordan (1-4), Katelyn Dineen (1-3), Grace Tobin, Tara Fleming and Ciara O’Sullivan were amongst the scores for a victorious Ibane.

Cork LGFA has announced the format for their upcoming 2022 top four leagues.

Defending league, county and Munster champions Mourneabbey have been drawn in Division 1B alongside the club they defeated in last year’s league final, Clonakilty. Aghada, Bride Rovers, Glanmire and Valley Rovers make up the rest of that division. Each club will play one another once and the top two will join their equivalents from Division 1A in the league semi-finals.

Inch Rovers and Fermoy made the last four of the 2021 Division 1 League competition and will face one another once again this year. Senior county championship runners-up Éire Óg, county semi-finalists Kinsale, St Val’s and Araglen Desmonds Buí complete the Division 1A roster. The opening round of Division 1A League matches are pencilled in for the weekend of April 17.

There will be massive West Cork interest in this year’s Division 2 League where five of the region’s clubs are involved. Castlehaven kick off their league campaign with a local derby against O’Donovan Rossa in a division Bantry Blues, Dohenys and Rosscarbery will also feature. Douglas, Naomh Abán and Donoughmore complete a strong Division 2 line-up which also begins on April 17. Beara make a welcome return and will contest an eight-team Division 3 League in 2022.