AOIFE Casey can’t remember exactly the final words of advice that her father and coach, Dominic Casey, passed on to the Irish lightweight women’s double in the minutes before the final in the Olympic qualification regatta held recently in Lucerne.

For the young crew of Casey (21) and Margaret Cremen (22) from Rochestown, this was the biggest race of their lives and they knew a top-three finish would guarantee them their place at the Games in Tokyo.

Their coach, Dominic Casey, as always, kept it simple with his last-minute instructions.

‘All you can do is your best.’

Casey and Cremen followed that advice – and their best was good enough to see them finish third, behind the USA and Switzerland, and take the last qualifying spot on offer.

‘I burst into tears with the relief,’ Aoife Casey says, and it’s easy to understand why as this Irish lightweight women’s double wasn’t in the Olympic conversation at the start of the year, but now they are on the plane to Tokyo.

Their fifth-place finish at the European Rowing Championships showed that they have the speed to race with the best, and these young guns produced the goods again in Lucerne.

‘We have worked really hard. Not just me and Mags, but all the lightweight women, including Cliodhna Nolan and Lydia Heaphy. We have a really good team atmosphere, work ethic and drive these last few years,’ Casey explains.

‘Even when there were doubts about whether it could happen or would happen or about the speed in the boat, we kept believing in ourselves. We trusted the process and as long as we did our best there was nothing more we could do.

‘Going into the final we didn’t feel any pressure on ourselves, all we wanted to do was do our best. If it worked, it worked. If it didn’t, it didn’t. I’m glad that it did!’

Underdogs going into the final Olympic qualification regatta, their task was made harder when, because of poor weather forecast for Monday in Lucerne, Monday’s finals were added to Sunday’s schedule so it meant two races for Casey and Cremen, if they qualified from their semi-final. They did, finishing second. They had only a few hours to recover and go again in the most important race of their lives.

‘It was definitely a challenge and we made sure we had enough of a cool-down after the semi-final but also we needed enough recovery and rest before the final to get going again,’ she explains. ‘Our training prepped and primed us well really well for that intense racing. We do trials at the National Rowing Centre every month, they are really intense and it’s two races every day for a number of days, so we can take it in our stride.’ 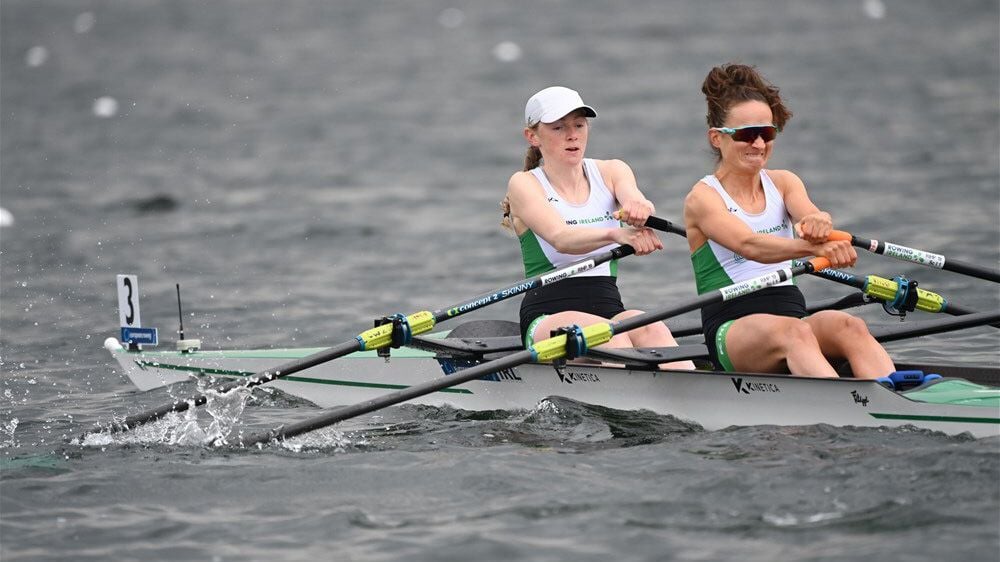 Aoife Casey and Margaret Cremen have qualified for the Olympics.

Casey and Cremen took the final in their stride too, battling through the field and they caught the Chinese crew to take the third and final qualification spot.

‘Once you have the first 20 strokes done, there are no nerves and no fear, all you can do is believe in yourself in each stroke and try to have the next one better than the previous one,’ Casey says.

‘That’s what we did, try to get faster in each 500 and make a big push from halfway. Once you are in the final 500 metes, that’s less than two minutes so you really have to just go for it – and that’s what we did. We pulled the hardest strokes we ever did to cross that line! It worked out so we’re delighted.’

Casey and Cremen also know they will be going to the Olympics, as do the Irish women’s four including Skibb’s Emily Hegarty.

‘Because we have qualified in the final Olympic qualification, the crews that were entered in that regatta are the people that have to be in the boat for Tokyo. Our two boats are the only two boats so far officially selected,’ Casey explains, as she turns her attention to Tokyo and springing another surprise.