HERE’S a story I have told before. It’s about Dominic Casey. Back in early 2017 we were on an Ireland training camp in Seville. It was the second last day of a three-week camp – and I was physically shattered, fit for the bed.

I was sharing a room with Shane O’Driscoll and we were together in the Irish lightweight men’s pair at the time; that was the start of our golden year together. Thrown on our beds, we were exhausted. Barely a word spoken between the two of us, and that said it all.

Then Dominic walks in.

There was back and forth for a good bit. In the end, we relented. He got us on the water. We were out there for at least 90 minutes and it was the best session of the camp. We went from thinking we couldn’t do a single stroke to pulling the best strokes of the camp. That was some feeling. We thought the well was empty, but Dominic showed us it wasn’t, that we had more to give.

As a coach, he instils a belief in his athletes. It really is that simple. We follow him because we believe in him. We did what he said. You either fly and die or you fly and win it. More often than not, we won it.

There are a lot of myths around Dominic and I can see why. Here’s a man from Skibbereen, with blood in his water and who grew up on the River Ilen, who talks fast and in his own code, and who has enjoyed great success with Skibbereen Rowing Club first and now, since 2016, as the lightweight coach with Rowing Ireland. He’s not a man for interviews or the spotlight, he keeps his answers brief, so in some ways he’s an enigma, an unknown variable in Ireland’s rowing success, but a key part of the jigsaw.

He was named World Rowing’s Coach of the Year in 2018. He probably didn’t like going out to Berlin for the awards because he missed training. He just wants to drive on. Next training session, next race. Next, next, next. He has the passion for rowing. It’s all about how can he make his athletes row faster? How can he improve the club? (Like the time he sent us into the secondary school in Skibb to round up new members to come out and join the club, but he didn’t say it as polite as that!) It’s a constant quest to get better – but what he does better than any other coach is he keeps it simple. 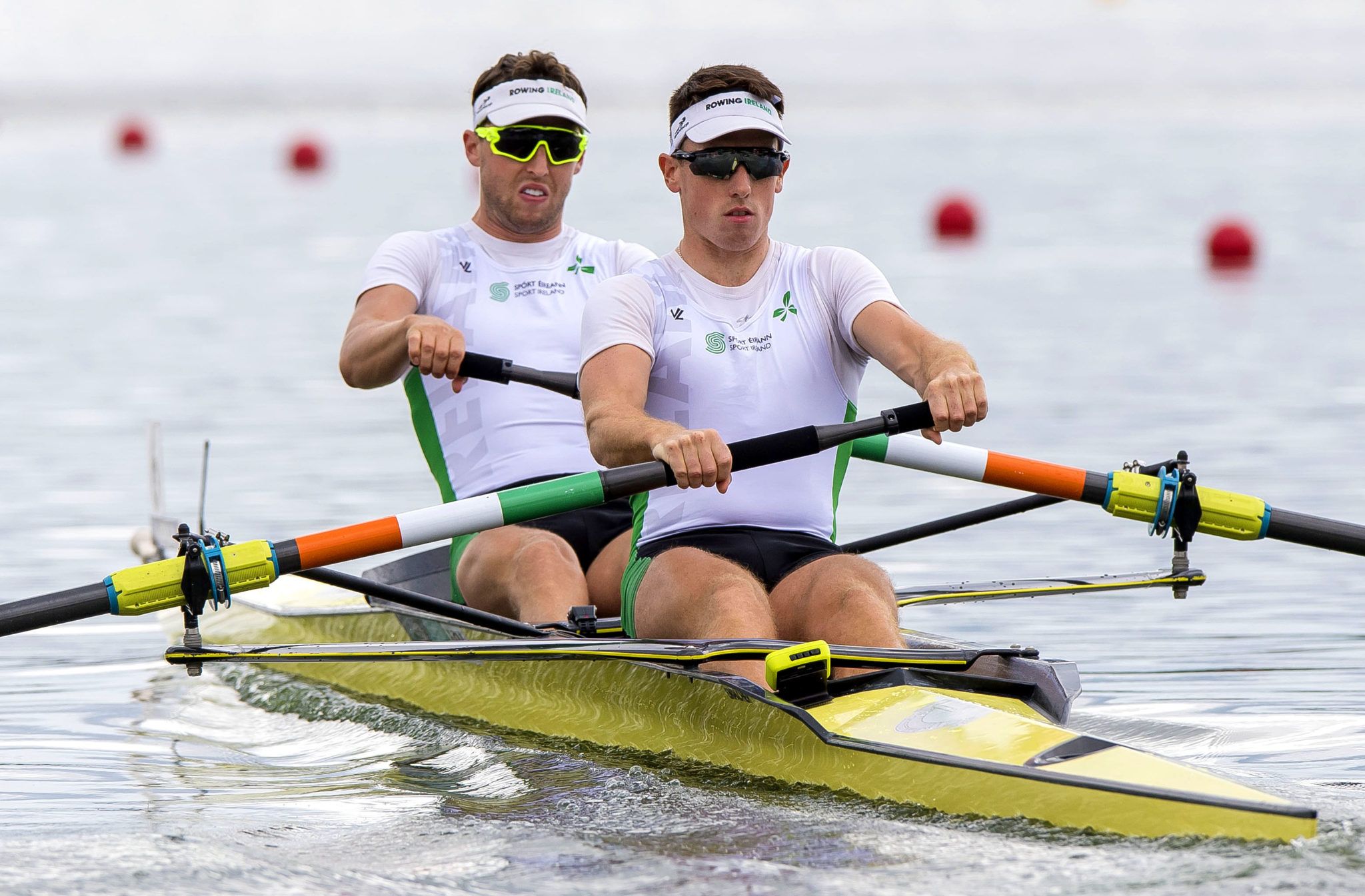 Skibbereen's Shane O'Driscoll and Mark O'Donovan in action at the 2018 European Championships.

Over the years there were races at regattas, whether it was with Skibb or Ireland, and we might not have been too sure about how we’d do. His advice was simple. Straight to the point. He doesn’t waste his words.

‘Go out there, as hard as ye can and fucking win it, nothing stopping ye.’

Dominic keeps it simple – that’s very important. He doesn’t over complicate things. He is also a coach who manages, and he manages people better than anyone else. When he was lightweight coach with Ireland, that’s what I needed at that stage of my career rather than being told what to do or how to do it. Dominic manages you and lets you think about what you are doing.

It’s all about having an input and making sure that your athletes are smart and able to think for themselves rather than being told what to do and when to do it and how high to jump. Out in a race we are on our own and Dominic isn’t in the boat. His work is done then, so his athletes need to be able to make their own decisions. He puts the responsibility and ownership back on the athletes. I like that. We had to think for ourselves. We’re not robots.

Another reason why Dominic has excelled as a coach is his ability to take advice on board. He listens to what the athlete says and he’s very adaptable to change. If we wanted to change our training time and push it an hour back, he’d listen to the reasons why and let us have an input. That creates a trust and a bond, and we knew that we had Dominic in our corner. And once he is in your corner he will fight for you.

If you are under his wing and he is coaching you, he will support you as much as he can, and give you all the tools and advice you need to make the best out of your talent. It’s up to the athlete then. He won’t spoon-feed you. A good coach should always be open to be questioned – and he is. If he doesn’t have the answers, he’ll try and find them.

It’s the small details, too. I hold a Masters in Sports Performance from the University of Limerick and I specialise in strength and conditioning. That’s a passion of mine. And Dominic listens to the science. He might be old-school when you think he rowed himself in the 1980s – in fairness, he won eight national senior titles – and he started coaching in the early 1990s, but he’s always listening and learning. When I was rowing for Ireland, we worked with Caroline McManus, who is now a performance scientist with High Performance Sport New Zealand, and then I would have worked with Trevor Woods, an exercise physiologist who is still working with the team. Two great brains.

Dominic is very good at taking on board suggestions from the science side of sport and what they advise on how to make a particular session better. You can either spend all your money on one session or you could spread it out to get whatever type of gains you are looking for. Again, he is open to ideas and input, and not one of those coaches who are my-way-or-the-highway cowboys.

I was a full-time rower with Ireland for over six years, from 2014 to early 2020, and Dominic was my coach there. He coached me before that in Skibbereen. We all developed together, us as rowers and Dominic as a coach. And we learned off each other, too. My own rowing days are behind me now, but, like so many athletes at home in Skibb and with Ireland, I’m grateful for his role and input over the years. We had some great times, and Dominic was always there in the background.