Happier times: Bill O'Herlihy presenting the Celtic Ross West Cork Sports Star of the Year 2012 award to Ruth Anne Sheahan of Leap at the gala banquet in Rosscarbery, where he proved a popular special guest. 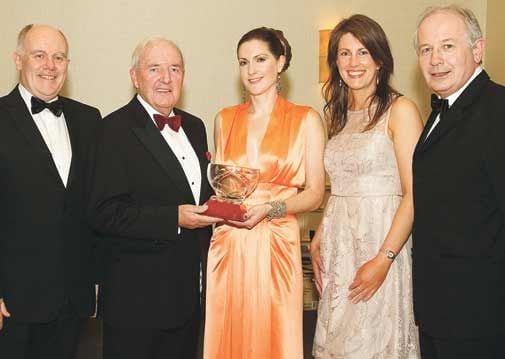 Happier times: Bill O’Herlihy presenting the Celtic Ross West Cork Sports Star of the Year 2012 award to Ruth Anne Sheahan of Leap at the gala banquet in Rosscarbery, where he proved a popular special guest.

I WAS 450 words into this week’s Last Word article on the subject of what is wrong with West Cork GAA football and the remerge of sledging when news broke of the untimely death of Bill O’Herlihy.

Like most people who had the pleasure of watching one of the finest broadcasters RTE ever produced, I stopped in my tracks, exhaled deeply and took a moment to try and take in such desperately sad news. I never had the opportunity to meet Mr O’Herlihy but just like you and countless other fans of the Cork native’s work, I felt I knew him.

That was probably the RTE sports anchor’s greatest trait. Making you feel welcome through the medium of television and using his down to earth, honest good nature to ask the questions of various expert panels that you yourself would attempt if you ever got the chance.

Regularly lampooned by the ‘Aprés Match’ comedy sketches for his tendency to utter infamous catchphrases such as ‘okey doke’ and ‘we’ll leave it there so,’ O’Herlihy cemented his status as a genuine character by laughing off the caricatures and even playing them up on occasion when anchoring various ‘live’ television events.

A post by Ger Sweeney that appeared on the balls.ie FaceBook page earlier in the week underlined O’Herlihy’s affinity and good nature when it came to interacting with his many fans: ‘I was in Almeria a few years ago and walking by a restaurant when I saw him sitting inside. I’d a few gargles and shouted “Alright Bill, how are you?” And he said “Good, thanks”. Then I said “Okey dokey” and he just said “We’ll leave it there so”. What a legend. RIP Bill’.

Darragh Maloney replaced O’Herlihy as RTE’s main sports anchor following the 2014 World Cup and told a lovely story about his first interaction with the Cork native on the ‘Soccer Republic’ show on Monday night.

Maloney was studying journalism back in 1990 when tasked with penning an essay about one of his heroes. Chancing his arm, Maloney rang O’Herlihy’s office and was patched straight through. Before he knew it he was invited to come in for a sit down interview following the briefest of conversations.

Bill gave his eventual replacement a full hour of his time despite Maloney admitting he was a complete ‘nobody’ at the time.

O’Herlihy even helped fix the young student’s tape recorder that broke down halfway through the interview and offered plenty of useful advice that would launch a career that saw Maloney go on to present ‘Premier Soccer Saturday’ on RTE.

Maloney has never forgotten that first interaction with the man whose seat he would eventually fill in front of the TV cameras and especially the fact he was willing to give up so much time to a young journalism student even though 1990 was one of the presenter’s busiest ever summers.

As fate would have it, Ronnie Whelan was in West Cork to promote a Liverpool Legends visit to take on West Cork League club Drinagh Rangers later this summer on the same day his RTÉ television colleague passed away.

Interviewing famous people is a difficult task at the best of times and even more so when someone as genuine and open as Whelan has afforded you ample time for a lengthy conversation despite the constant demands on his attention.

So, I found myself sitting opposite the former Republic of Ireland and Liverpool midfield star in the front garden of Drinagh National School under a baking hot sun and hating myself for having to be professional and ask a difficult question about the death of his great friend.

Whelan choked back a few tears and gave this complete ‘nobody’ journalist an honest answer in an effort to help him out with his article.

‘Bill would always say just muck in Ronnie and say what you like. Get in amongst them and don’t be a bit afraid to express your opinion,’ Whelan remembered.

‘He was a very approachable person and would come in to the studio, shake everyone’s hand and ask how you were getting on. It is just hugely sad news for everybody to hear of his unexpected passing.

‘Bill was just a great man and was always there for me whenever I needed him. I will miss him.’

Bill O’Herlihy was the first face and last voice a generation of Irish TV viewers saw and heard during live transmissions of the most important sporting events in this island’s history.

He asked the ‘man on the street’-style questions, kept Johnny Giles, Liam Brady and Eamon Dunphy on their toes and was the conscience of an RTE panel that became as famous as those they were tasked with analysing.

O’Herlihy’s ecstatic reaction to Ireland reaching the last eight of the 1990 World Cup will remain my fondest memory of a kind, decent person and dedicated broadcast journalist.

Rest in peace ‘Bill O’, there is no better Cork man to control the angels arguing about the Republic of Ireland’s 4-4-2 formation up in heaven.

We’ll leave it there so.