NEW Cork hurling captain Seán O’Donoghue will look to keep doing the things that saw him appointed to the rule rather than being burdened by the duty of being skipper.

The Inniscarra clubman served as vice-captain to Mark Coleman in 2022 and has been promoted by new Cork manager Pat Ryan. Turning 27 in January, the trainee farmer helped his club to win the Co-op SuperStores Cork Premier IHC this year as they beat Castlemartyr in a replay and he is keen to progress further in 2023.

He wasn’t expecting the call to be captain but he was delighted to accept.

‘I was vice-captain last year,’ he says, ‘but I didn’t know how they’d go about picking it, really.

‘I was a bit taken aback, more pleasantly surprised than surprised, I suppose.

‘Mark Coleman has been a great captain, so I didn’t really expect anything different. Pat might have wanted to put his own thing in place, I don’t know what it was, but it’s nothing to take away from Mark.

‘He was a brilliant captain.’ 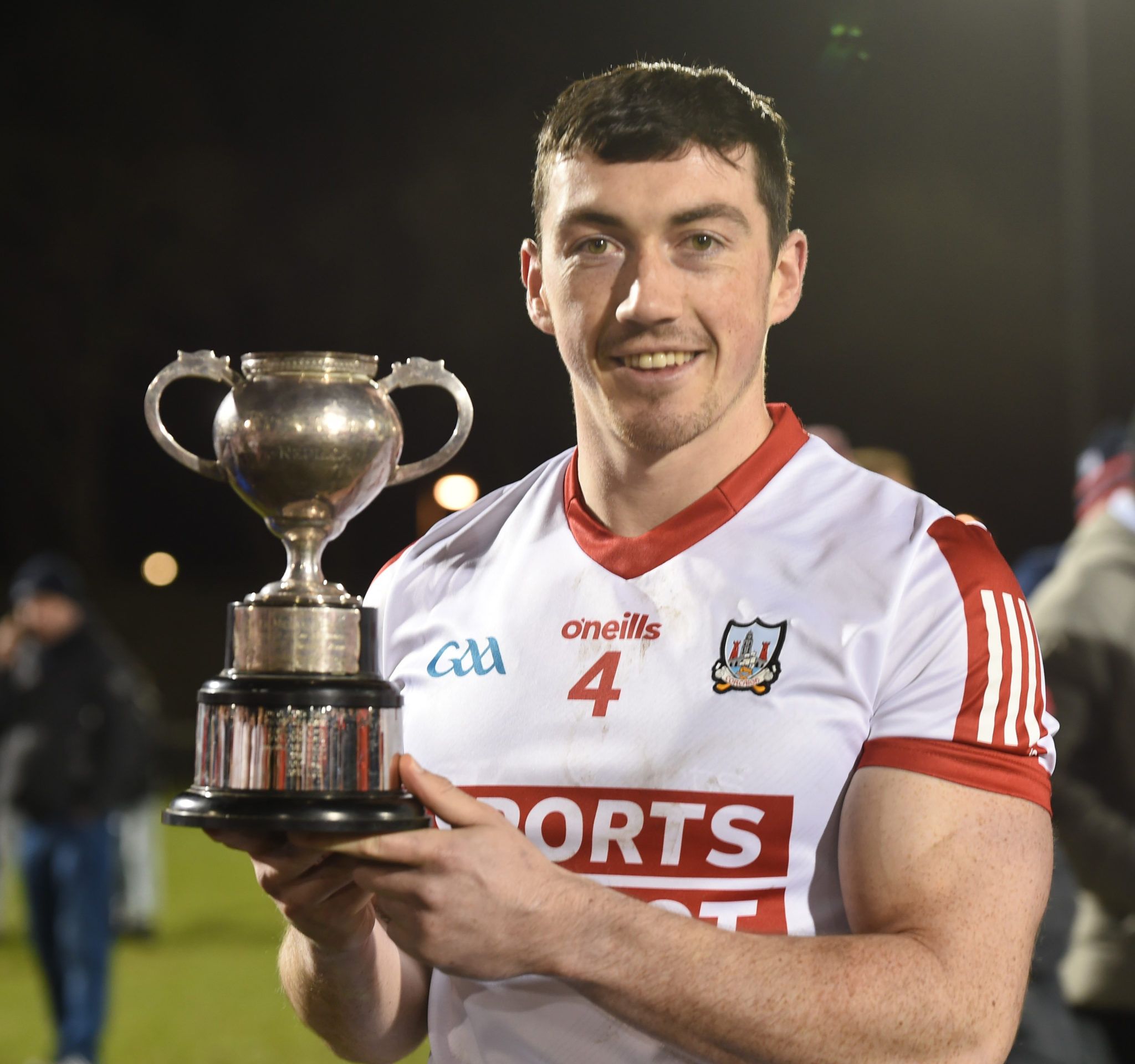 Cork hurling captain Sean O'Donoghue pictured with the Canon O'Brien Cup after the Rebels beat UCC 0-25 to 1-15 at the Mardyke on Tuesday night. (Photo: George Hatchell)

O’Donoghue has a strong captaincy portfolio. In 2014, he led Ballincollig’s Coláiste Choilm to the All-Ireland Post-Primary Senior B football title while he also skippered the Cork U21 football team in 2017 and the UCC fresher hurling team.

He made his Cork debut for the county in the Waterford Crystal Cup (precursor to the Munster Hurling League) under Jimmy Barry-Murphy in 2015 and also featured in 2016 after Kieran Kingston took over as manager but it wasn’t until 2018 and the Munster SHC win over Clare that he made his championship bow.

He helped Cork to retain the provincial title that year and, since then, he has largely been ever-present in the Cork full-back line. He was nominated for an All-Star award in 2021 after excelling on the county’s run to that year’s All-Ireland final.

‘He looks after himself unbelievably well. Some nights where we’d be training, he’d go to the gym afterwards and do extra reps or whatever he needs to do.

His dedication to the game is amazing. He’s as close as you’d get to a full-time player.

‘He’s so calm and he takes everything in his stride. I’m sure it’ll be like that now too with the captaincy, even though it’s obviously a great honour.’

McCarthy effectively summed up O’Donoghue’s approach – embrace the captaincy without being weighed down by it,

‘I captained the school in 2014, when we won the All-Ireland B football,’ he says.

‘I don’t know what it is about me that I’ve been picked as captain of a few teams – maybe it’s that I do a bit of talking or something, I’m not sure – but I wouldn’t be the kind to let it make a difference to my preparation or the way that I train or the way that I am in the dressing room or anything like that.

‘It’s just about trying to lead, really. Luckily, inside in Cork, there are leaders all over the dressing room so it’s just a case of plugging away and trying to do a small bit extra – without changing anything!’

While Owen McCarthy was the Inniscarra captain this year, as a county star O’Donoghue naturally fell into a leadership role as they came out of a group featuring Bandon, Valley Rovers and Youghal before seeing off Ballinhassig and Castlemartyr in the knockout stages.

He credits McCarthy and his management team for the work they put in in their first year.

‘We had great management teams in the past as well,’ he says, ‘but sometimes a change can be needed to shake things up.

‘The beauty about new management is that, whether they were going to be good or bad, everyone was on a clean slate.

‘They’re not looking at players as being suitable for a certain position because they played there last year – they might look at a wing back and say, “This fella could do a job in the forwards.”

‘I missed a lot of the start of the year as I was involved with Cork,’ he says, ‘but I was still in the group chat and I could see the seriousness of it all.

‘When the groups came out, we fancied ourselves in that group, though I wouldn’t say that’s too different to any other year, either – whatever the group is, you tend to say, ‘Oh, we’ve a right chance at this one.’

‘After playing a few of the teams in the league as well, we were confident. There was never any doubt that we had the players to do it and the management to do it, it was just a case of upping our workrate, really, and everybody buying in.

‘I thought there was a massive buy-in this year. Most nights, we had 40-plus people in training.’

Now, the focus returns to inter-county action and O’Donoghue is keen to get going again. The fact that Ryan – who managed Cork to the 2020 and 2021 All-Ireland U20 titles and served as senior coach previously – is familiar with so many of the squad should be a help in terms of a bedding-in period.

‘Everyone really has worked with Pat in some sense, so there’ll be no favourites or anything like that,’ O’Donoghue says.

‘Everyone is singing off the same hymn sheet now really and everyone is going to be given the same chance, which is good.

‘I’m looking forward to getting back to it now as soon as I can. I’d only get bored of not training!’