THE freak accident that claimed the life of 22-year-old Dunmanway driver Eoin McCarthy during the recent Killarney Forestry Rally has sent shock waves throughout and beyond the West Cork community.

Eoin was competing in just his second-ever rally, the first in forest tracks, when his young life came to a premature end.

A member of the well-known and much-loved McCarthy family from Kildee, Eoin succumbed to his injuries at Cork University Hospital.

Competing in the event that was based in Castleisland and that marked the beginning of the Irish Forestry Rally Championship, Eoin and his Dripsey co-driver Daniel O’Brien (30) were amongst the entries in Class 16 where they competed in a Honda Civic.

The accident occurred on the day’s fourth stage, the second running of the 9.88 Mount Eagle stage, that finished to the east of the village of Cordal when their Honda Civic went off the forest track at relatively low speed before ending up in a stream.

Eoin is mourned by his parents Liam and Nora (nee O’Driscoll), his brother Conor and sister Rachel and is sadly missed by his loving family, Conor’s girlfriend Maeve, aunts, uncles, grand-aunts, grand-uncles, cousins, work colleagues at Wesco and a large circle of friends. 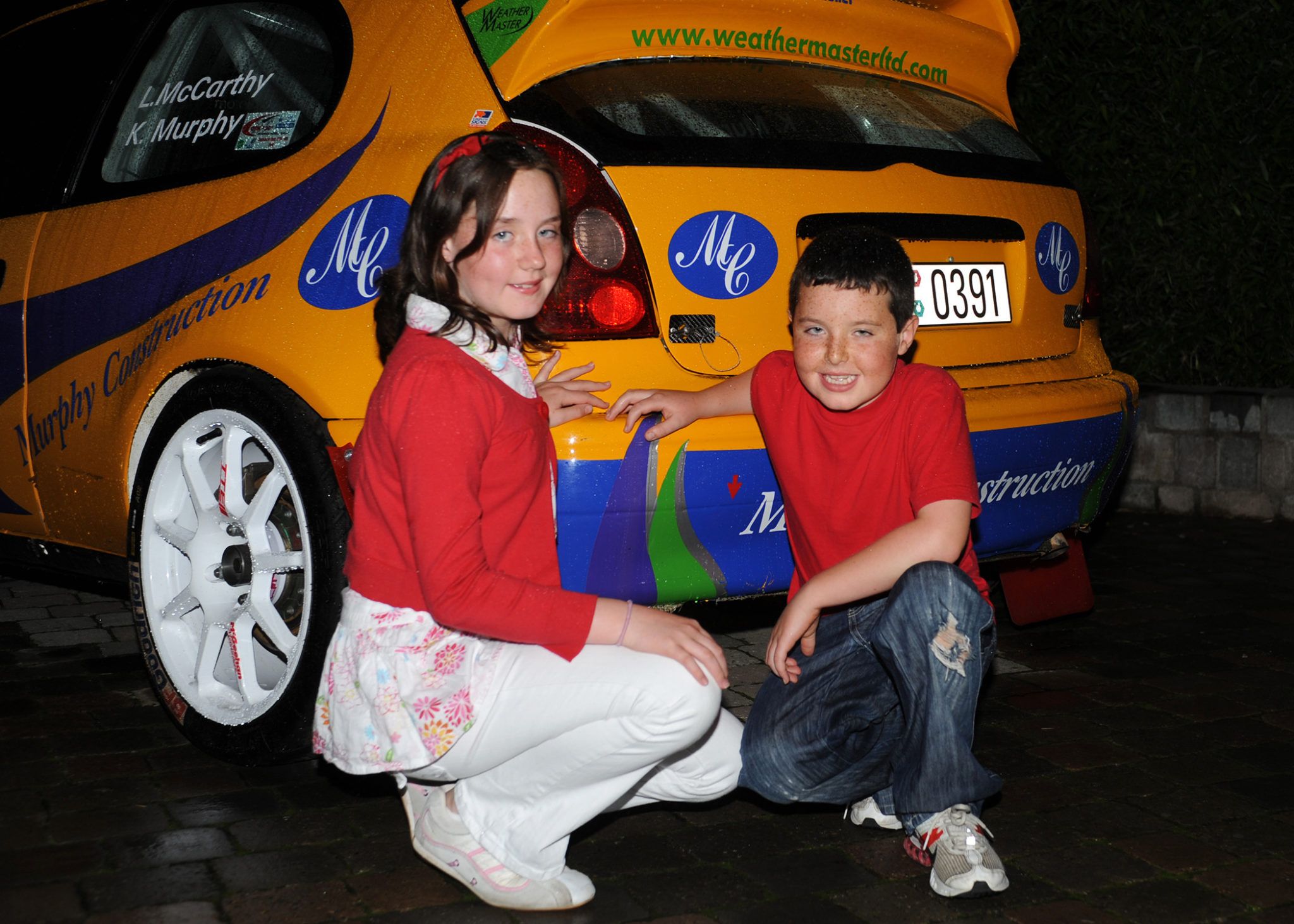 Eoin with his sister Rachel, at the launch of the 2008 Cork '20' International Rally, with their father Liam’s Toyota Corolla WRC.

The McCarthy family are steeped in motorsport. Liam is a former winner of the West Cork Rally and a triple winner of the Fastnet Rally while Conor also competes in rallying and took part in the recent Galway International Rally. Indeed, that same weekend Eoin was part of Conor’s gravel note team and was looking forward to competing in last weekend’s event.

He made his rally debut with Conor as his co-driver on the Cork ‘20’ International Rally last September; they finished fourth in the Junior category and won Class 16.

Eoin along with his dad Liam and brother Conor have a long association with the local Skibbereen and District Car Club and last week, directors and committee members of the club met in Clonakilty to pass a vote of sympathy to the McCarthy family. Conor is member and former treasurer of the club while Eoin joined the club in tandem with the beginning of his motorsport activities.

‘The McCarthy family and the Skibbereen and District Car Club have forged a very strong relationship down through the years. We are all shocked and saddened at Eoin’s untimely passing,’ club chairperson Padraig McCarthy said.

‘Motorsport has a very tight-knit community and we support each other, yet it seems unimaginable to understand the sheer devastation of this tragedy. We offer our sincere sympathy to Eoin's family and his wide circle of friends.’

Meanwhile, the organising committee of the Clonakilty Park Hotel West Cork Rally issued the following statement: ‘We would like to offer our condolences to the family of Eoin McCarthy on his untimely passing following an accident at the Killarney Forest Rally. We extend our sympathies to his father Liam, former West Cork Rally winner, his mother Nora, brother Conor, sister Rachel, extended family and his large circle of friends. We also keep in our thoughts his co-driver Daniel O’Brien, fellow competitors and all the officials and medics, who attended the scene yesterday. May he Rest in Peace.’

On the Sunday morning, prior to the start of the Killarney Forestry Rally, Philip Moynihan of EARS (tyre suppliers) was speaking to Eoin at the tyre truck. Philip said, ‘Eoin came down to the truck about tyres and even though we hadn’t met him before, we had a great bit of banter, he seemed a lovely lad. Of course, we are well acquainted with Liam and Conor through the years, they are all such a lovely family and we offer them our sincere condolences.’

On a personal note, this was never the way I envisaged writing about Eoin. Motorsport has always been an intrinsic part of the McCarthy family fabric and just like anyone that opts to play gaelic games, golf, rugby or any other sport, they do so for enjoyment. It is terribly sad that Eoin never really got the opportunity to enjoy happiness, success and longevity in motorsport. May he Rest in Peace.