The Clonakilty Hockey squad that won the 2014 Irish Women’s Hockey Challenge Cup following a penalty shootout victory over Botanic at the National Hockey Stadium in UCD.

SUSIE Forristal is an integral member of the Clonakilty senior team that has reached the last four of the 2022 Irish Women’s Hockey Challenge Cup.

It will be an historic day for Clonakilty hockey when the progressive West Cork club hosts Belfast side NICS in the Irish Women’s Hockey Challenge Cup on Saturday, February 26th.

A large attendance is expected at the Sports Complex in Scartagh, Clonakilty, where the home team will look to repeat their heroics of 2014. Eight years ago, Clon defeated Botanic 5-4 following a dramatic penalty shootout to capture the Women’s Hockey Challenge trophy.

Forristal was an integral part of the Clonakilty line-up that afternoon. The experienced club stalwart is still playing and as eager as ever to get back to another national final.

‘Clonakilty had previously won a lot of leagues and cups while moving up from Division 5 to Division 3 but 2014 was the first time we reached a Women’s Hockey Challenge Cup final,’ Forristal told The Southern Star.

‘Melvyn Beamish was in charge of us and we had a very talented team. Winning that cup was something special, especially at the National Hockey Stadium in UCD. A fantastic crowd travelled up from Clon that day as well.’

‘I think it is down to having such a good combination of younger and older players,’ Forristal said.

‘There is a great camaraderie within the senior squad and always a good vibe at training. We have gotten a lot of experienced players back and the young girls coming up are pushing for their place.

‘Another big thing this year is the fact all of Clonakilty Hockey Club’s underage teams are absolutely flying it. The number of young girls playing hockey for the club right now and the support they are receiving is absolutely phenomenal. They are driving the senior team on. This club is going to go on to bigger and better things with so many well-trained younger players coming through. The people involved in Clon hockey are so passionate about their club right now, it is brilliant to see.’

As good as things are going off the pitch for Forristal’s hometown club, on it, they face a huge challenge in overcoming NCIS from Belfast to reach another Hockey Challenge decider.

‘Getting to a final and winning it would be unbelievable simply because we have put so much time and effort in this year,’ Forristal admitted.

‘We do a good two hours on a Thursday night and the commitment all year has been brilliant from both our senior and Division 6 teams. To get to a final would be a dream come true. You will never beat that feeling we got from winning in 2014.’ 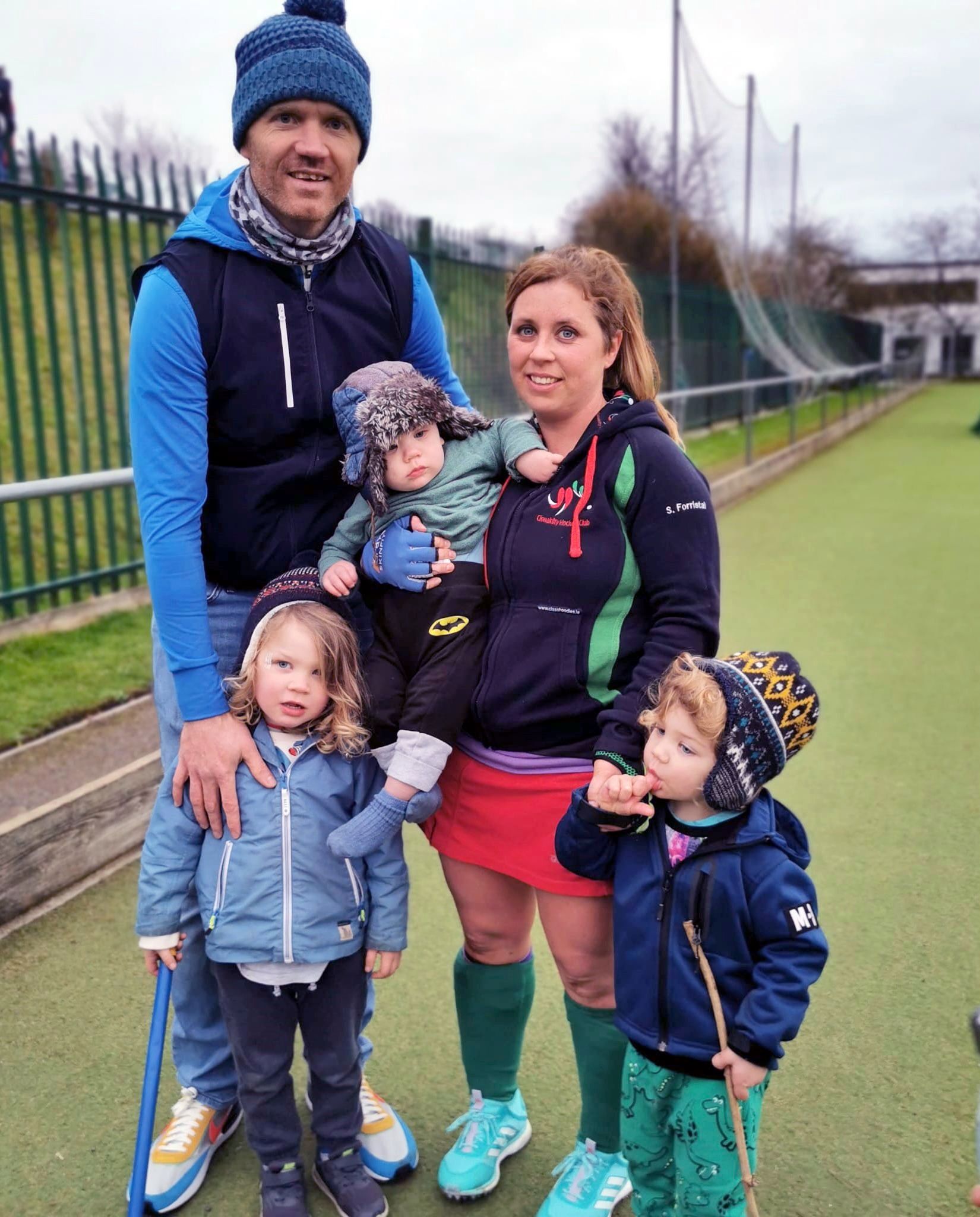 Married to Kevin, Susie and her husband have three young sons, Mattie (4), Joey (2) and Jamie (11 months) who will turn one year old the weekend of the semi-final. It is clear that Forristal’s love of hockey remains as strong as ever.

‘That would have been when I was in primary school. The reason I first got involved is because a few of the girls in my class would be talking about the craic they had playing hockey at the weekend so I instantly wanted to be part of it.

‘I would have played all the way through secondary school with Sacred Heart Clonakilty. Robbie O’Donoghue was our coach and he was brilliant. Robbie drove the hockey on whilst I was there. We won a lot including a Munster title.’

There wasn’t an adult hockey club in Forristal’s hometown during that time but her hockey career continued when she went to college in UL. Once college was finished and a few years travelling around the world completed, Forristal and a group of friends living in the Clonakilty area decided to rekindle the love of their favourite sport.

‘Debbie Hurley and Lorna Brookes were the ones who got things going once again after I came back from travelling in 2010,’ Forristal said.

‘We started off with a few training sessions under Iain O’Driscoll, and more and more people started getting involved. Things just took off from there but, despite a few lean years, now, we are back in another Women’s Hockey Challenge Cup semi-final. It is going to be a fantastic occasion for the club.’