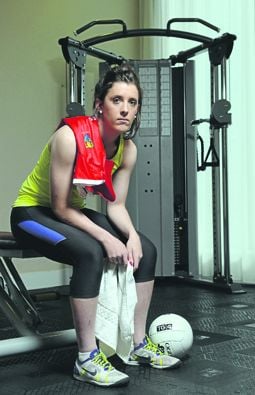 The weight is over: Cork captain Ciara O’Sullivan pictured at the launch of the TG4 Ladies’ Al- Ireland football championship earlier this week. (Photo: Brendan Moran/Sportsfile)

While much has been made of the three O’Driscoll brothers from Caheragh – Colm, Kevin and Brian – all starring for the Cork senior footballers this season, in the north of the county the O’Sullivan sisters from Mourneabbey have gone one better.

Roisín, Ciara (Cork captain this year), Doireann and Meabh are all involved with Eamonn Ryan’s Cork ladies’ senior football team – a fact not lost on Ciara who, ironically, works with Kevin O’Driscoll at Deloitte.

‘We’d have a good laugh over it. He’d be saying that three is great, but I let him know that there are four of us!’ O’Sullivan told The Southern Star.

‘It’s a nice achievement and it’s great to have the girls there, but at the same time we are all competing for places, even against one another.’

There was bad news earlier in the week as on Monday Doireann O’Sullivan had a cast placed on a broken thumb that rules her out of this Saturday evening’s TG4 Munster senior ladies’ football championship final in Mallow, at 6pm.

Still, Cork’s unique take on Sister Act spurs one another on and, as Ciara explains with a smile, they don’t hold back on one another either.

‘I would have been used to playing with Roisin up along from underage. We are only a year apart,’ Ciara said.

‘It’s different having the other two (Doireann and Meabh) involved with Cork. You’d be used to having them involved with Mourneabbey, so it’s great to have them inside with Cork. They’d be the first ones to criticise you, let you know what you do wrong, and I’d be the same with them. That’s good because we help improve one another.’

This Saturday evening all the focus will be on Mallow and that Munster final against Kerry. While Cork are targeting an incredible tenth All-Ireland senior title in only 11 years, they will not take their eye off the ball – they want to remain number one in their home patch, and that means beating Kerry.

Cork have won ten of the last 11 Munster senior titles, with Kerry shocking them in 2013, and a win on Saturday will send out an important message.

‘Winning becomes a habit and that’s why the Munster championship is so important to us and we take it very seriously.

‘The last few games against Kerry have been very tight and could have gone either way, so this is a chance for us to remind everyone out there that even though a few of the older players may have left, that this Cork team is still a force.’

Kerry have a new management team this season and, as always in these local derbies, O’Sullivan is cautious.

‘It will be close on Saturday. It always is. Look at the two league games this year. We know each other very well, we’ve played each other a few times every year. There’s never much between us so we know what we need to do,’ she said.

These are changing times for Cork ladies’ football as the iconic team from the last decade breaks up, player by player, with Nollaig Cleary, Norita Kelly and Anne Marie Walsh the latest to exit stage left, following Elaine Harte and Juliet Murphy who retired in 2013, while Angela Walsh is taking a year out.

24-year-old Mourneabbey ace O’Sullivan has soaked up as much as she can from these legends of the ladies’ game, and it’s helping her this year, her first season as captain.

‘At the start of the year it (being captain) was something I was nervous about, but this is my eighth year with Cork and I have been lucky that I have played under some great captains – Juliet (Murphy), Rena (Buckley), Angela (Walsh), Anne Marie (Walsh). I have had the chance to see what they do and learn from them,’ O’Sullivan said.

‘It’s natural in any team that people move on and retire, and younger people then come up to take their place.

‘We have been lucky in Cork to have a strong underage structure where our teams have been competing for All-Irelands. That’s really standing to us now because they are coming up, putting pressure on the established players and competing for places. Competition for places can only be a good thing.’

What will also be a positive is victory over Kerry on Saturday evening – a statement of intent that the All-Ireland, league and Munster champions are hell bent on holding onto all their crowns.